However, despite this, there is more and more evidence that the cryptocurrency market has completed a correction and is rather bullish.

In today’s review, I want to highlight the tokens of several decentralized projects at once. The first project is Synthetix, a protocol for creating synthetic derivatives and integrating them into DeFi. We all know about trading tokenized shares on the FTX and Binance platforms, while the legitimacy of trading such instruments on centralized exchanges is being considered, Synthetix has added Coinbase (sCOIN) and Microsoft (sMSFT) synthetic stocks, and will soon be available for trading on the DeFi exchange Balancer. Analyzing the price movement chart of the native Synthetix token, we can state that the price of the token in relation to USD / USDT is at the stage of completing the formation of the 4th wave of Elliott waves. Support at the $ 13 level is critical, so growth can be expected, but it is worth considering dynamic and static resistance at the $ 22- $ 24 levels, breaking through which will help the SNX rise to $ 39.2 and $ 49.5.

The next token on my list for the Swipe decentralized trading protocol is SXP. On April 30, Swipe will release the White Paper of the second version of the Swipe V2 protocol, which will outline 2 objectives of the new version: creating a bridge between crypto and commerce with the addition of payment in SXP, creating a fully decentralized automatic market maker (AMM) based on SXP … The founder of the project burned his SXP tokens in the amount of more than $ 200 million and 17.5% of the total circulation, which adds to the scarcity of the token and, according to the founder of the project, is another step towards achieving the goal of establishing the total circulation of SXP in the amount of 100 million. SXP / USDT, after setting a new all-time high on April 10 at $ 5.507, pulled back to $ 2.650, losing slightly more than 51% in price. Now the pair has formed an ascending parallel channel and is moving towards the levels of $ 6.40- $ 6.80.

Cardano does not stop on the way to improving the functionality of its blockchain, so in early May the project will launch native smart contracts on the Cardano blockchain, and will be a real competitor to Ethereum. Native smart contracts will have all the attributes for running NFT tokens. Today, the project also announced the launch of Cardano Pay together with COTI; for vendors, the platform will provide its CRM system for tracking transactions, as well as staking ADA tokens. It should be noted that the successful launch of smart contracts is the third stage in the transition to the Goguen era. 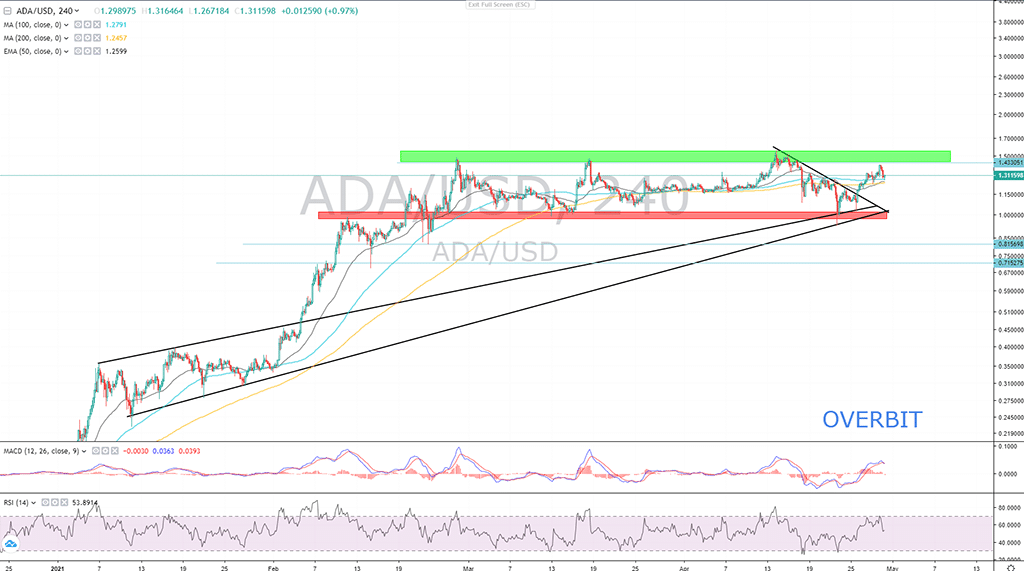 From the technical point of view, Cardano has approached a heavy resistance zone, despite a concentrated support by MA100, MA200 and EMA50, the resistance may force the price lower. If Cardano breaks above the resistance and closes above $1.50, the price will most likely continue the uptrend up to $2.07-$2.09 levels. Keep in mind the $3.9 billion Bitcoin futures settlement, which might drag the prices down a bit.

The Cardano outage is not a new occurrence for some of the majority of Layer-1 protocols.