Bitcoin options are the institutional game with big people making big bets. At least this is how they present the product, but in reality, the options trading may be a risky venture with no predictable outcomes with very few users trying it out.

Do you remember all those ‘Bakkt Rekkt’ memes wandering around smart Telegram channels? When Bakkt started its first product, nobody believed that it will succeed. However, the volume soared in the next couple of months, leading to the predictions that Bakkt will facilitate a lot more contracts in a year or two.

However, the Bakkt Options data shows that its users made last deals on 17 January, with 20 lots being traded over the day. After that – complete silence. What is it? Bakkt Bitcoin contracts are no longer in the scope of the investors? But the CME Bitcoin futures product still has significant userbase. So, the other scenario is that Bakkt is making some marketing move playing with the set of negative-positive news rolled in a way that drags public attention.

The futures are useful when the market is in a high volatility zone. Since the Bakkt’s launch, they only traded a little bit over $1 million. It is a small amount for the institutional exchange. The biggest piece of cake was the $500,000 contract opened in the second week after opening. If you compare the stats to CME, they had closed over $2,8 million in contracts during the first day of trading.

Interestingly, CME Group launched their product independently from Bakkt, so there are no obvious reasons behind Bakkt’s low volumes. It is either the Bakkt team is too busy preparing some big marketing campaigns. Or they don’t have a marketing department at all. During the last week of trades, there were zero contracts opened on the Bakkt platform, while CME closed 59 deals.

Some skillful researchers, like the WhaleBot Alerts authors, think that Bakkt is Cooked and the stats from the exchange can even be removed from the bot forever. 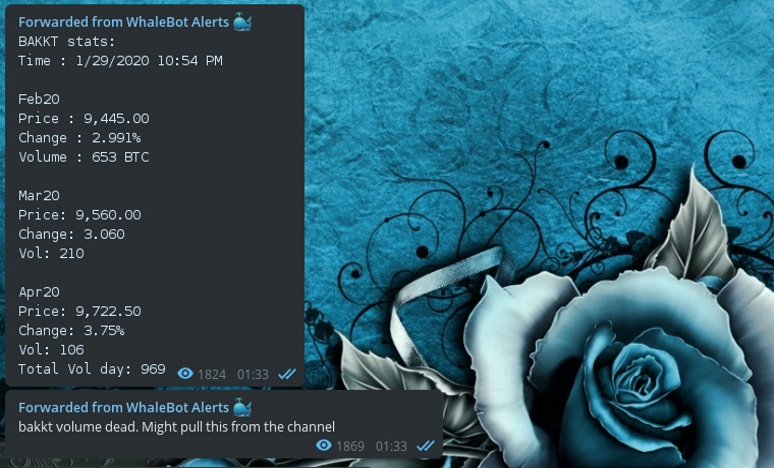 The wave of memes will not be as huge this time, people will just get rid of unnecessary data parsing for their projects and continue rolling. CME is registering the average daily volume of 6,400 contracts per day in the year 2019. Bakkt had such volume only during one day – on 18 December 2019. No matter what happens with Bakkt’s offer. The demand exists and its a matter of competition whether CME loses market share or drags in all the major trades completely.

Investors pulled out billions of dollars in value from the Tether circulatory supply after regulators raised red flags around stablecoins.

The growing popularity of cryptocurrencies has continued to attract a lot of prominent fintech firms with PayPal coming off as one of the many.