Despite the fact that the crypto community has a number of good news, Bitcoin price is still moving down.

At the time of writing, Bitcoin is trading at $ 7,911.80, the lowest level since the end of October, and the decline is down, the price is likewise down despite positive news.

From now on, Fidelity will be able to offer cryptocurrency trading and custody services to high-end New York customers.

Nevertheless, the same analysts have left hope that the bears may take the lead in the market and the price will fall.
On Monday, the statistician Willy Woo predicted that the current price behavior in Bitcoins may stay “different” invariably to prior cycles in its existence. While making a case that, the BTC/USD may target its 2020 block returns by halving the bearish sentiment. In 2012 and 2016, after the halvings, it gave a result of at least six months of bullish progress.

Miners’ activities also influence the price of bitcoin, as they spend tons of energy to extract bitcoin and have to exchange their bitcoin to keep running. There is indeed a relationship between the energy costs of mining and the price of Bitcoin.

Although it is much more complex than that, the efficiency of Bitcoin mining has increased significantly in recent years, which means that the break-even point of Bitcoin miners crash has decreased. This scenario always results in lowering the price of Bitcoin, but this was not the case. The reason is the mining difficulty of Bitcoin which continues to grow. Bitcoin halvings also had a wide sentiment on this phenomenon. 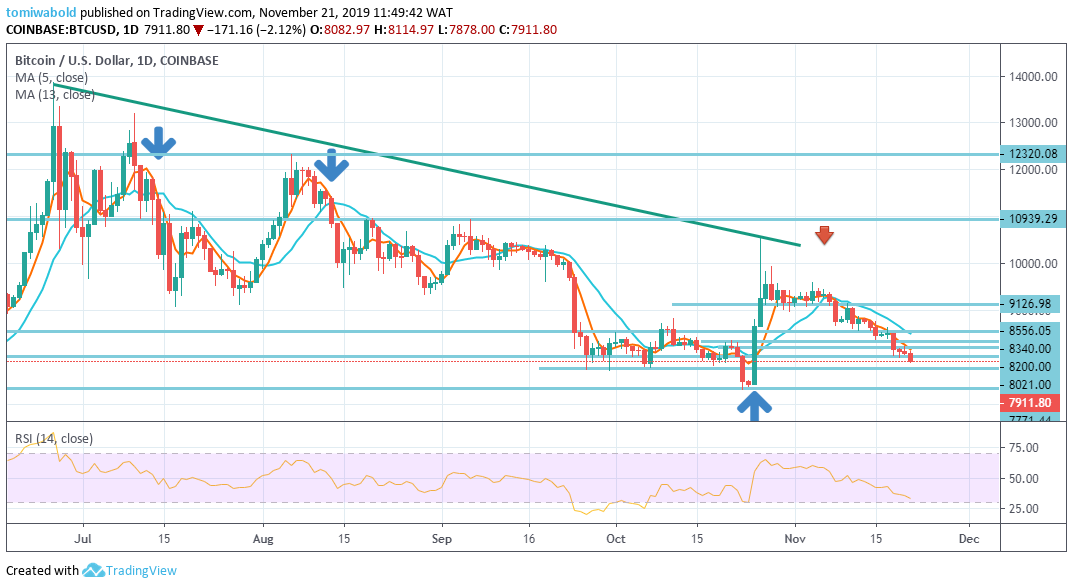 Trading to the price level at $8114.97 higher after the open earlier today, BTC/USD was unable to hold its gains as the bears took control and may exit the day below its opening price.

BTC/USD prices have missed to decisively move beyond the prior day’s high in a lackluster session. And while trending lower today for the 4th consecutive day, BTCUSD had exited the prior day on the level at 8099.22 losing $43.27 (-0.53%). In today’s trading, the BTC/USD as at the time of composing has already recorded a low level of 7878.00 which marks the lowest recorded price from October 24th.

BTC/USD is now trading close to the key technical support level at 7771 low. The pair has shown its unable to trend higher than today’s high at $8114.97, as the market discovered sellers on the same price level today.

The digital currency outlook stays bearish, displaying an intact downtrend in the short, medium and long-term.