The latest correction in Bitcoin has brought it close to the dangerous levels of a “death cross” but analysts still prefer to remain bullish as many say the pain is “largely over”.

The crypto markets are showing no signs of recovery but instead have been gripped by a string bearish momentum wherein the overall market cap has slipped below $300 billion and Bitcoin has gone way past tumbling down below $8000. As per the latest chart indicators, Bitcoin seems to be heading towards what is famously known as a “Death Cross”.

On Wednesday, Jim Iuorio of TJM Institutional Services wrote to CNBC saying: “When we are talking about bitcoin, I think it’s important to remember that we don’t have much history to go off of to identify long-term trends. That being said, any time the 50-day crosses the 200-day, it should flash a warning…and when you couple that with the fact that bitcoin has been trending steadily lower since the launch of futures, I think that it is a major negative.”

However, many analysts don’t seem to be much worried about the death cross patterns on the Bitcoin charts. Brian Kelly, a trader at Fast Money thinks that Bitcoin is poised for a big uptrend similar to as seen after August 2017. While talking to CNBC, Kelly said: “Bitcoin, just like the spot FX markets, follows technicals closely, therefore these support levels gain more importance. If these levels hold, then it will confirm the uptrend from August is still valid.”

Hence, getting some positive news for the Bitcoin bulls, Morgan Stanley says that 70% of the erosion is “nothing out of the ordinary,” and further that such corrections “have historically preceded rallies.” Just as Nasdaq gained in the subsequent years of the tech bubble, the agency believes that Bitcoin could all be set for a similar recovery ahead. 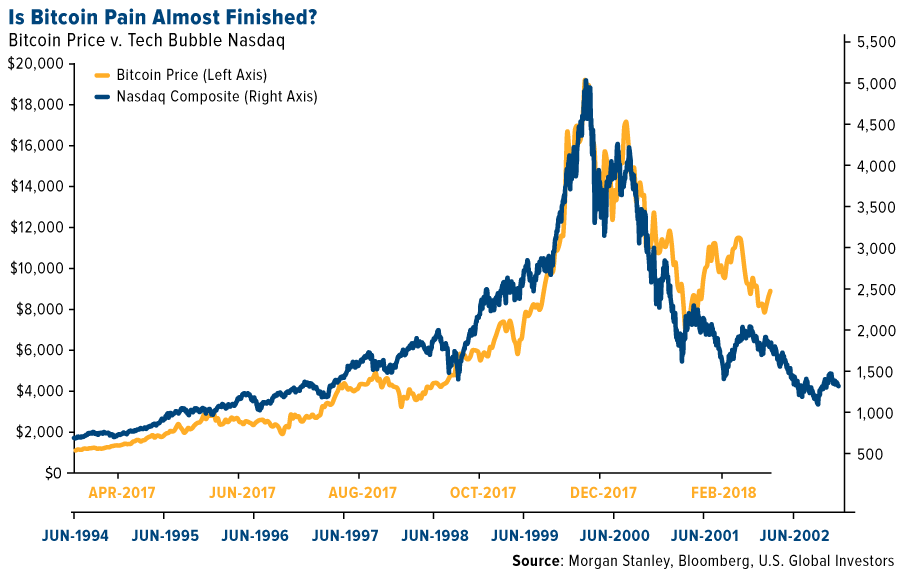 Another New-York-based firm Fundstrat says that not only Bitcoin but even other altcoins have already found a bottom. Fundstrat strategist Thomas Lee told to investors that even though the cryptocurrency bull run might not be in the near-term soon, the pain is “largely over”.

However, Thomas Lee has stated that even though crypto investors are looking out for other cryptocurrencies apart from Bitcoin, they should largely stick to major large caps like Ethereum and Ripple.

While taking a long-term view, Morgan Stanley also compared Bitcoin current with the one from the past. Going back to June 2011, Bitcoin touched a high of $30 and just in the next five months, it re-traced back to touch a low of $2.02. Later it took nearly 15 months from then onwards to again arrive at $30 levels. However, the one who bought it at the bottom levels made got a whopping price appreciation of 1,300 percent.

However, note that nothing can be said with surety about the future based on the past indicators and trends and moreover till now, we don’t even have a decade of data with Bitcoin to identify some strong trends.

Bitcoin price has in the past year shown increased correlation with the traditional stock market. However, as data shows, the asset has held better during the recent sell-off.