Bitcoin price is now rather far away from a recent high of $9,200. The U-turn has come after an impressive performance since the beginning of January.

The BTC/USD market is countrolled by bears for the third day in a row. This Thursday, the Bitcoin price plunged from $8,660 to $8,386.60 level. And in trend continuation this Friday, the price has declined further than $8,300.00 southwards.

The digital asset market records negatives again with bitcoins and altcoins, which are among the largest losers in the top 20. The bearish correction should gain momentum in anticipation of the weekend, as most altcoins unfold the growth of the prior sessions. The overall market capitalization fell beneath $230 billion, and bitcoin dominance returned past 66.0%.

Cryptocurrency bears always claim that “Bitcoin isn’t valuable, as there are currently over 2,000 digital assets.” There exist only 20 PoW digital assets contending with bitcoins as a money commodity and as a store of value, as the rest effectively launches as equity.

The bullish advance, which was highly rated in January of this year, seems to have relapsed and switched to the mantle of the bears, who desire only to damage the digital asset market. The market as a whole is tainted and, surprisingly, the largest gainers in the prior week, now record the biggest losses of the day.

Bitcoin is pulling back from a recent high of $9,200. The U-turn takes place after an impressive performance from the beginning of January.

Meanwhile, it is clear that the unfolding scenario has already begun, and bitcoin could soon reach the price level of $8,000 once the support of $8,300 fails to hold. The largest digital asset has recorded a market value of $8,249.78, and as it is an intraday high of $8,400 was reached on Friday. 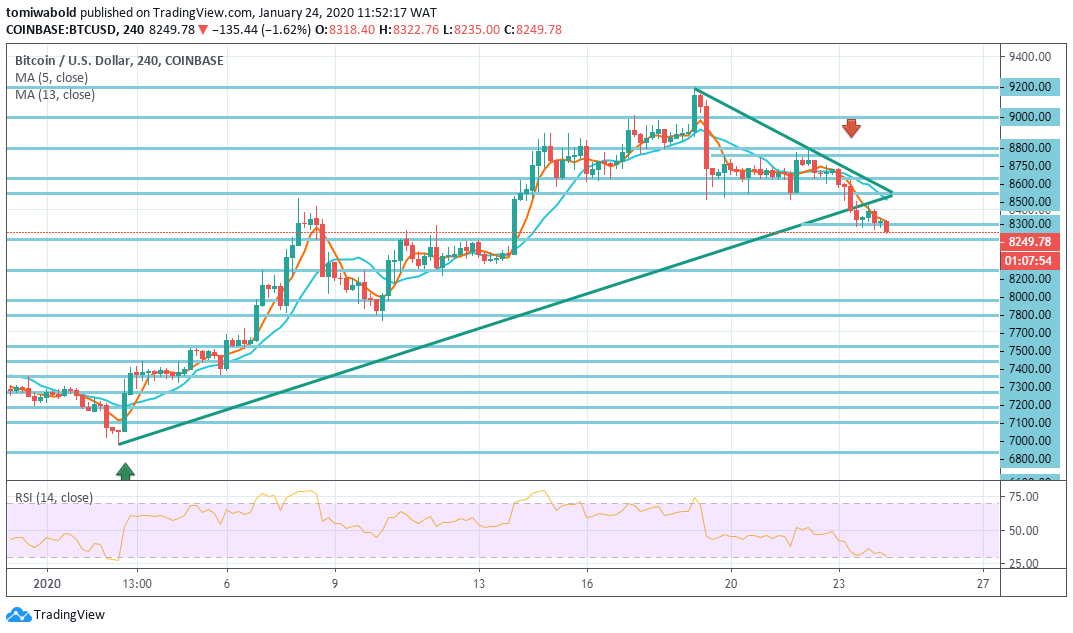 On Friday, Bitcoin is trading around $8,249.78 level, as the number one digital asset is gaining further bearish momentum. The loss of the support level of $8,300 may lead to the decline of the BTC/USD pair to the level of $8,000 in the short term.

The medium-term bulls may be hiding around the $8,000 level pending the next BTC/USD bullish move, targeting the $10,000 level.

In unforeseen circumstances, the BTC/USD pair is trading beneath the $8,300, sellers may proceed to test support levels of $8,000 and $7,700 in the near term.