Since the start of the week, the prices of Bitcoin (BTC), and Ethereum (ETH) have experienced a heightened level of volatility, pushing them from resistance level to new support at relatively short intervals. While the market showed promises of revival yesterday, a twist has been introduced, pushing both coins even to their lowest points in the past week.

Bitcoin is leading the market by a wider rate of change compared to Ethereum as the bears are showing no slowing down in their sell-offs. The premier digital currency is currently exchanging hands at $50723.3, down 12.11% in the past 24 hours according to data from CEX.IO’s price feeds. This price level is notably the lowest point for the “digital gold,” sending the shock wave down the market, a scenario that may engineer a more landslide fall.

Ethereum, though trailing BTC per the rate of loss is struggling to find balance at the $1,500 support level, with a determined effort to prevent the concentrated bear pressure at this level. Why might the market bears be so aggressive in the sell-offs today?

Bitcoin and the Reactions to Bearish Comments

Yesterday’s price recovery was fueled by Elon Musk’s confirmation that Tesla has commenced accepting BTC for its products. The news had a short impact on the market as potential customers particularly those residents in the United States profiled the true cost of landing the company’s EV cars. The possibility of the Internal Revenue Service (IRS) taxing the capital gains on Bitcoin for long-term holders up 20% has perhaps waned the initially perceived bullish news. How many BTC HODLers will be willing to part with their coins, and pay a huge tax on the accrued gains in the process? Not many.

Bitcoin has also been noted by Ray Dalio, the billionaire investor and founder of hedge fund Bridgewater Associates to be at the risk of being banned by the government around the world in a bid to protect their financial monopoly. While the Bitcoin market responds to various sentiments, the impact of these two cannot be swiftly ruled out. 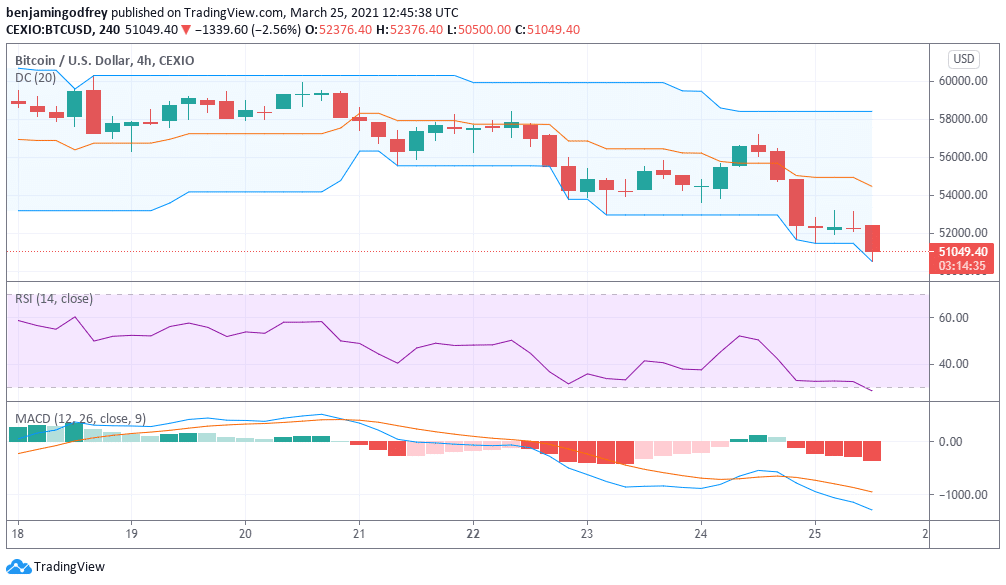 On the BTC-USD 4-hour chart on TradingView, the Donchian Channels, Relative Strength Index and MACD are all bearish on the price momentum of BTC. A continuous move in this direction may lead to a $43,000 price drop for the cryptocurrency, the lowest level it has traded in the past month. An upward price target is bleak at this time, but a correction may herald a recovery back to $54,000.

Ethereum is struggling at the $1,500 support level as there appears to be a concentration of power between the market bulls and bears. In the past 24 hours, the coin has dropped from a peak of $1,743 to a low of $1,551 as seen on the ETH-USD 4 hour chart on TradingView. The coin dropped past key support levels at $1,700 and $1,600 respectively. 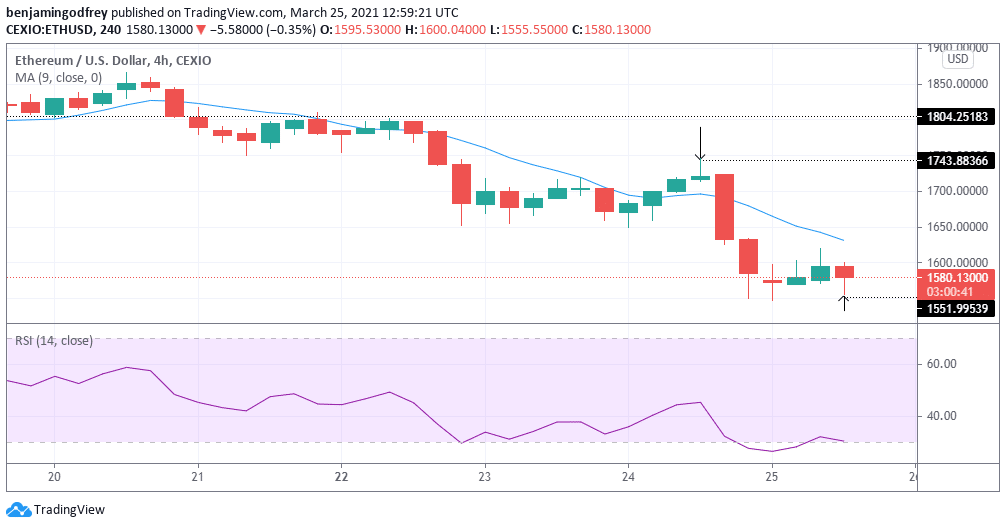 While the rate of free fall of Ethereum at this time is largely correlated with Bitcoin, the likely probability for the coin to herald any form of recovery will be dependent on the premier currency’s next moves. The technicals are particularly bearish on the short-term growth of Ethereum as the 9-day Moving Average is seeing a very steep gravitational pull.

Twists and turns are inherent in the cryptospace and while Ethereum is looking more poised to retouch the 30-day low of $1,300, an unanticipated twist may let the bulls push the price back up to its 5-day high of $1,846.