Cryptographer and PhD in Information Security Dr. Pavel Kravchenko shares his “alternative opinion on blockchain” dispelling the illusion of its intermediary-free nature.

The ultimately trustless relationships in Bitcoin got people thinking that, being the underlying technology of this revolutionary non-intermediary paradise, blockchain is able to remove third-parties across-the-board. There is nothing more distant from the reality.

We would like to cover this topic and give you some food for thought considering, what many call, an “alternative opinion on blockchain”. The main aim of this article is to show you that there’s nothing alternative here. It’s just that the level of thoroughness is a bit higher:)

That’s where it came from. Bitcoin — a financial database with no privilege levels, where all the changes are managed mutually by all users. For the first time ever, we are given an opportunity to digitally store and transfer value without anyone’s interference — peer-to-peer. With Bitcoin, users don’t have to trust those who validate transactions because each of them is a validator, themself. And, there’s no “but” here. Bitcoin, indeed, allowed for the elimination of the middlemen in the financial database. Blockchain is, indeed, an underlying technology that allowed for this elimination. However, it doesn’t work with everything.

Note: A system without a single trusted third-party, of course, excludes the trust factor, however, implies that each user is fully responsible for their actions (taking risks is a part of the intermediary’s job). If you lose the private key to your wallet you can’t have it recovered by visiting the “Bitcoin office”, because there is no such.

An intermediary in a general sense is a party that specializes on a certain process. People apply to intermediaries in order to reduce the time and risks of having a certain process accomplished. This can also be called delegacy and will exist as long as there’s life in the Universe. Neither blockchain nor any other technology will ever allow us to forgo delegacy.

Automation of the Processes

Do you remember the process of hotel reservation before the booking websites times?

Today, with booking websites, you can come around no fewer than the first four steps. The website contains everything: selection of almost any kinds of hotels and apartments, ratings, reviews, functionality that allows you to book a room yourself, transfer service information and so on.

In some cases, the automatization of the booking process has already reached the level when you don’t have to waste your time and go to meet someone who’ll hand over the keys to the room because you initially receive the digital one.

This is the automatization of the processes. It is remarkable that after having one process automated (basically disappeared), the next in turn (to be automated) appears immediately. A good example is the quality control of the room preparation in real-time.

Today, the hotel maid prepares the room and updates the status: room is cleaned. In future, you will be able to check the preparation stage yourself, because rooms may be furnished with cameras that switch on immediately after the check-out of the previous guests. Yet, even here you have an intermediary — booking website that transmits you the video data (and takes around 20% of the total price you pay).

For greater decentralization, items such as cameras, door locks, air conditioners, balcony doors, etc can be furnished with APIs, so that they would directly ‘talk’ to those who want to access their data. While with the transparency that blockchain provides for, room guests would be able to ascertain particular facts, for example that cameras are offline when they’re inside the room.

This kind of evolution is a pretty much endless process. It reminds of a joke that computers are solving problems that didn’t exist before their advent.

By now, you might be having one or couple of thoughts considering why is that we’ve highlighted the difference between the two concepts. The point is that we aimed to have your main focus on the core message of this article: Blockchain won’t ever replace intermediaries, but will significantly contribute to automatization of the processes.

The Precise Reason Why Middlemen Will Always Exist 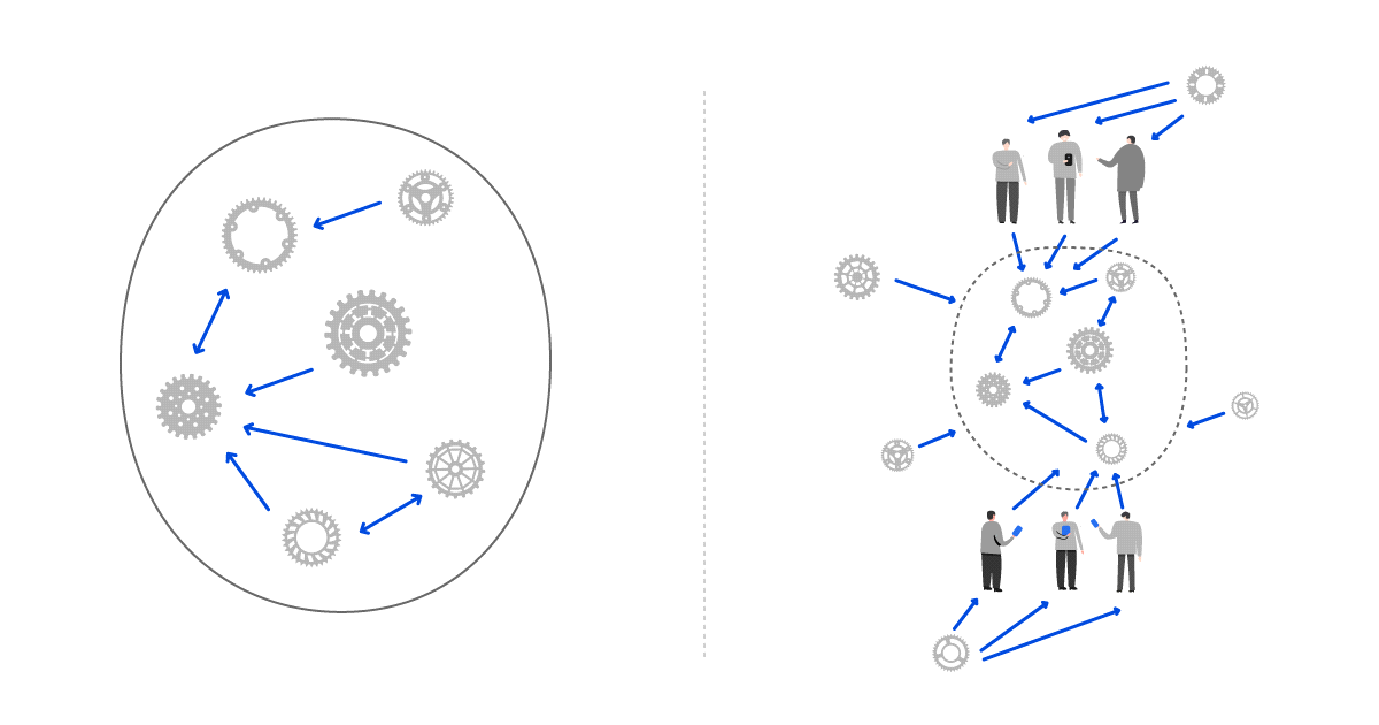 The circle on the left is an abstract figure of a self-sufficient database that doesn’t have any dependencies from the real world. All the operating mechanisms are based on the data that’s already stored within this database. Correspondingly, each piece of data may only have dependencies with other internal data and never interacts with the ‘external world’.

Now, this may sound too abstract, but essentially that’s the Bitcoin case: BTC coins is the data that was mined in the database. The transactions transfer coins from one address to another, while the system doesn’t have any necessity for, so-called, gates to the external databases. You cannot transfer fiat currencies or any digital tokens (except for BTC coins) in the Bitcoin network. And that is one of the primary components that may allow the system to be self-sufficient and ultimately eliminate the middlemen.

As you may have already guessed, the circle on the right is a database that has dependencies from the outer world (the fact is that most systems do have). Going a bit further, it’s precisely the middlemen that ensure this outlet, provide the gate that connects one database with another, sometimes even insert or approve the data, manually.

With or without blockchain, national registries will always require intermediaries that put the data in it — government. With or without blockchain, the digital ownership platform will always require middlemen that would verify your identity, make sure that the apartment you ‘digitally own’ actually exists or bricks (digital tokens backed by bricks) that you bought haven’t decayed so you can have them delivered right alone.

From the technical perspective, such intermediaries in blockchain are called oracles — trusted or partially trusted parties that collect data from the ‘exterior world’ and enter it into the database. Blockchain allows minimizing the trust towards them because you can have a certain number of independent oracles that pass you the data.

How Blockchain Contributes to the Process Automation

Blockchain technology allows for the data reconciliation between independent parties (sometimes, they don’t even have to trust each other).

Such a flexible data alignment allows to automate certain processes, upon that, enhance the level of security and reliability, in general.

What Can Be Programmed

Blockchain opens new opportunities for the audit work, for example. If you have a certain business that annually goes through these tiresome inspections, blockchain may significantly help you and the authority that does these inspections. Having a database built on the blockchain, you may grant a regulator with an auditor-node that will be synchronized with your database in real-time. As a result, all the inspections regarding the database will be done online and, what’s fundamental, automatically — without any kind of paperwork. This will be possible when and only when all the necessary drivers of the blockchain ecosystem finally emerge.

What Cannot Be Programmed

In order to assure certain documents, the notaries must make sure that their clients are actual people with reasonable intentions that come to their office to have some activities certified. There’s no way you can program similar processes upfront.

How Else Blockchain Contributes to the Process Automation

Of course, blockchain is not the only and main engine of progress, but just one of them. However, the elements of automation, that it may allow for in the nearest future, are quite substantial:

Instead of having one trusted intermediary involved, you may have a certain number of independent oracles/validators (basically, the same middlemen). Each will independently do their work: provide you with the information (in case of oracles) or manage the changes in the database (in case of validators). The risk of collusion of independent intermediaries is significantly lower than just having a single one. In this way, you can be much more confident as to the results of the work done by these ‘middlemen’, whether it’s the information they’ve provided you with (oracles) or the changes in the database they’ve verified (validators).

With blockchain, you won’t be using a precise service that will further write out a check for their work. Instead, the blockchain technology may well change the very ecosystem of our interaction with the middlemen, where each of them will be representing a part of the common-for-all system.

This is one of the most evident points. As mentioned above, blockchain contributes to the automation of most processes (that earlier were either impossible or at least hard to automize). Obviously, it reduces your time expenses as in the case with the digital key to your hotel room. Technically, the provision of the digital key can be done without the blockchain, however, the traditional approach would presume the complete trust towards the hotel that is to send you the digital key once a payment is made.

Blockchain may minimize the trust factor (and eventually risks) because in this case, it would be the smart contract that executes the processes: verify your payment, send you the key to your room and so on. While the correctness of the smart contract execution would be verified by independent validators, aka intermediaries. This very automation significantly reduces the time expenses (and the trust factor).

One might think that we walk on the thin ice, claiming that validators and/or oracles in the permissioned blockchain systems are the same middlemen. But in the very fact, it’s true. In case of a permissionless blockchain (like Bitcoin), middlemen are indeed excluded, because each user accomplishes all the work that the third-party usually performs (manage the database, take the risks, etc). However, if we speak of the blockchain-based national registries, voting platforms, business/trading platforms, etc there is no way around intermediaries who verify and insert the data and take users’ risks (partially or fully).

Third-party, middlemen, intermediaries (call it whatever you want) aren’t going anywhere and hardly ever will. Blockchain doesn’t eliminate them ultimately, rather, changes the very ecosystem of our interaction, eventually contributing to the transparency and the significant automation of the processes.

Dr. Pavel Kravchenko is the founder of Distributed Lab, blogger, cryptographer and PhD in Information Security. Pavel is working in blockchain industry since early 2014 (Stellar). Pavel's expertise is mostly focused on cryptography, security & technological risks, tokenization. He considers the company's mission in a creation of an open ecosystem that uses uniform payment and asset management protocol - so-called ”financial web'’

Subscribe to our telegram channel. Join
Related Articles
Guest Posts Blockchain Sustainability in 2022 and Beyond: The Complex Realities and Potential Answers
By Jonathan MacDonald May 2nd, 2022

Blockchain sustainability is a complex and multifaceted concept. It is about the economic, social, and environmental dimensions of human and technological development.

This partnership is believed to go beyond the training kits to explore the technology space including Web 3.0 and Metaverse to maximize opportunities.

Since the launch of Bitcoin in 2009, the blockchain and crypto space has struggled to solve the blockchain tri-lemma problem, which simply states no blockchain is able to achieve all three of decentralization, security, and scalability at once.