Bitcoin came back to the levels recorded a week ago on Friday. A solid support stack lies between the price levels of $7,200 and $7,300 for BTC/USD.

Bitcoin has spiked this week, reaching $7,600 on Monday for the first time in almost 14 days, but quickly declined at the upper price level of $7,688.99. This step increased the profit of Bitcoins before the holidays.

Investors are encouraged that now Bitcoin is approaching the $8,000 level. And there is an increasing likelihood that traditional non-crypto investors, traditional financial investors, may again begin to look at crypto. This is very important because introducing this new type of interest and demand into cryptocurrency can push Bitcoin to its historical maximum.

Despite the fact that the price of Bitcoin was not able to exceed its historical highs of 2017, almost $20,000. A return to these levels would mean about 150% cryptocurrency movement.

The price of Bitcoins on Monday rose after it crossed the threshold of $7,000, but could not rise to the level of $8,000.

Forecasting the BTC boom or burst, there are two technical or price patterns that have emerged over the past two years, these are downward channels, which are a series of lower highs and lower lows. The first began in early 2018 after the fall of the price of Bitcoin from its historical maximum. For 10 months, the cryptocurrency fell from $12,000 to $3,000 in December a year ago. 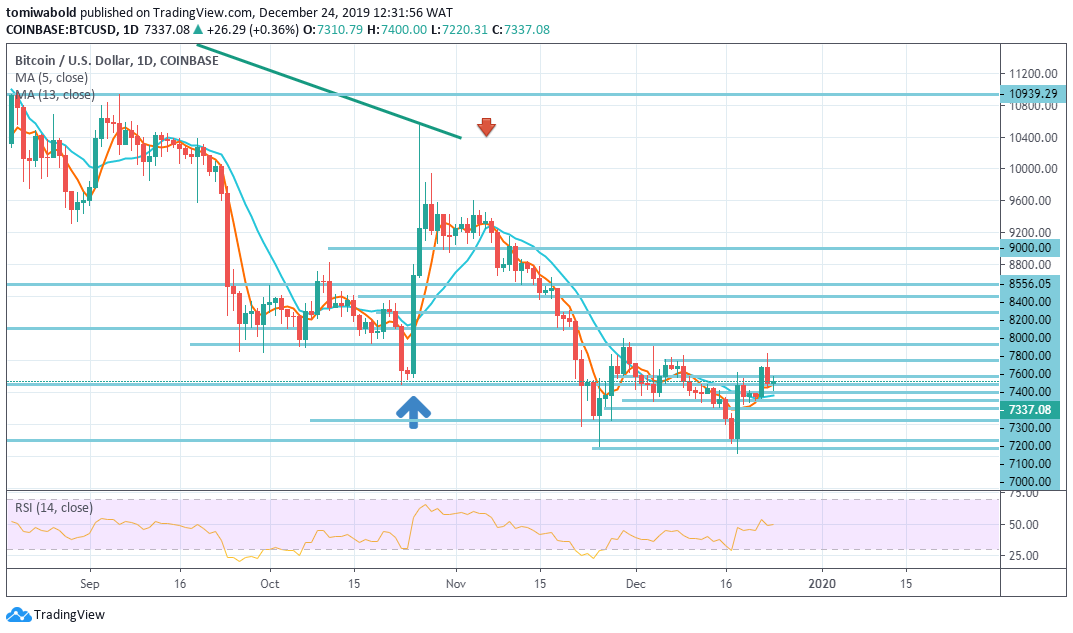 The overall capitalization of cryptocurrency available for use is enlisted at $190 billion. Bitcoin came back to the levels recorded a week ago on Friday. A solid support stack lies between the price levels of $7,200 and $7,300 for BTC/USD.

Then again, we have to see a relentless move above $8,000 for the advancement to pick up momentum.

While the daily trend on the relative strength (RSI) stays at a similar level, the trigger line begins to turn up, which may flag that the recovery is going all out.

Bitcoin’s strength surpassed 68%, which proposes that the primary digital asset is viewed as a coin of the first choice amid market vulnerability.