Cell Protocol, a decentralized oracle network working on blockchain, is looking forward to becoming a leader in the DeFi field.

Decentralized Finance is on the rise and there are a lot of interesting projects developing in this ecosystem. Coinspeaker asked Cell Protocol Team to share details of their work and their future ambitions.

Coinspeaker: What is Cell protocol and its main goal?

Coinspeaker: What are the Cell working mechanisms?

Unlike the rest of the current oracle machines that gain their data from off-chain trusted third parties, the incentives for the Cell agreement make prices form directly on-chain. The participants must invest real money in order to be responsible for their actions in the ecosystem.

For example, participants can offer agreed prices, such as 50 TRX = 1 USDT, and then put the two assets into a quoted contract varies as the price, usually 200,000 – 1,000,000 TRX in size, and receive 1% of the TRX size as a commission to mine and receive Cell.

Coinspeaker: What are the peculiarities of the Cell quote validation process?

Cell Protocol Team: In our system, anyone who is interested can be the verifier and conduct price validation on the quotations. If there is a deviation between the quotation and the market price, then there will be some room for arbitrage. At this time, the verifier can start our unique order-eating arbitrage: 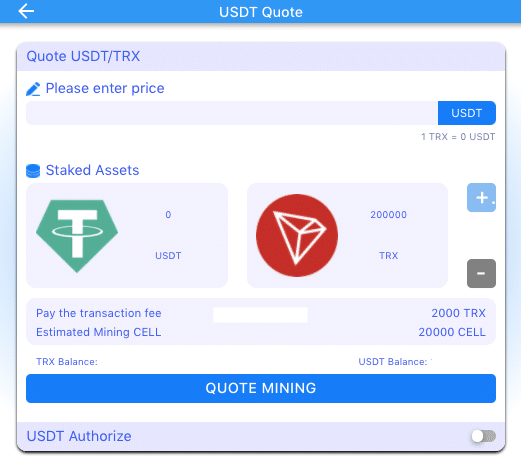 The minimum amount of order eaters for the validator is n * 200,000 TRX, where n needs to be an integer. While eating orders, validator will need to offer a new quotation, with a beta times the size of the quotation. Currently, beta=2, and if the validator’s new quotation deviates over 10% compared with the previous validated quotation, the new quotation size must be timed 10 times.

There is no price feeding fee for new offers initiated by verifiers and no participation in Cell yield farming. The verifier will need to pay a transaction fee of 0.1% of the TRX number of orders eaten.

Coinspeaker: Does your project have its own token?

Cell Protocol Team: Yes, we have our own token, Cell. It is a TRC20 Token issued by the decentralized Cell Protocol based on the Tron network, and the maximum number is 10 billion.

The following details are the calculation of Cell gain from yield mining:

Number of Cell awards contained in blocks that are packaged offer transactions is M; the height difference of the block from the last block containing a quote transaction is K; and M = K * Number of awards per unit block. In other words, if no price feed orders show up for some time, then the first miner offering a price will gain all the tokens that were not previously mined. Let’s assume the quote commissions in the block is E, where a particular quote pays a commission of e. Then the number of Cell digs for that quote is N:

Coinspeaker: What makes Cell different from other oracle projects?

Cell Protocol Team: Like I said before, different from other oracles that obtain data from trusted third parties off-chain, Cell agreement encourage forming prices directly on-chain. Real money needs to be invested so that the participants can take the responsible for their actions. This means that the Cell agreement can promote users to offer real data.

In the Cell protocol ecosystem, there is a continuous mutual work between quoters and validators whose identities are transformed over time. When considering the values of beta and T0 (quotation period), the distribution of the quoted token positions and the execution period of the arbitrageurs are the two main perspectives to consider. The vast majority of token positions are not normally distributed but have distinct Fat Tail characteristics. In contrast, it is easier to manipulate in the more concentrated token positions. As we are aware of, the Block Interval on Tron is shorter, which can allow the validator to arbitrage enough times within T0 at a much lower cost to return to a rational price within the T0 cycle in a shorter period of time. This project allows anyone to adhere to the price structure, the price of which can reflect the actual transaction price of the pair, and can show price changes fairly quickly.

Coinspeaker: Is it possible for the Cell to become a leader in the DeFi field?

Cell Protocol Team: We hope so, and we believe oracle will become the vital fundamental of DeFi whatever in Tron or ETH ecosystem. Let me introduce more about what we did before.

For Cell Oracle, in order to become trustful, we ran simulations on the TRC-20 tokens under different scenarios. We checked the system model to see the cost of mischief and how much time it takes to regain the Nash equilibrium based on the distribution of positions in different tokens and the frequency of trades.

The figure below shows the position of a randomly selected TRC-20 token Richlist 1% address, which accounts for about 67% to 100% of the liquidity, and simulates the behavior of the project side holding absolute liquidity with the intention to control the price.

From the scheme below you can see that the frequency of attacks by the attacker under four different position limits and the number of trades that can be packaged in each block. 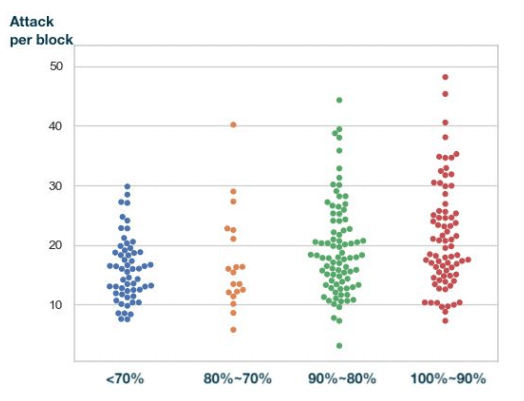 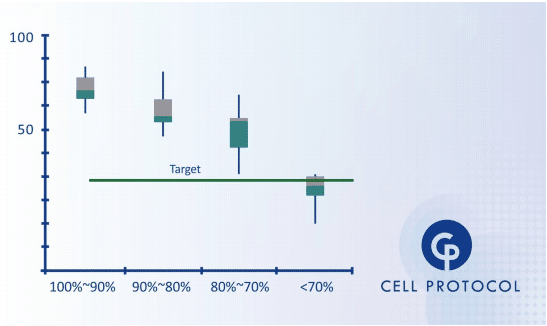 Coinspeaker: How can the Cell be improved after joining Tron’s DeFi ecosystem?

Cell Protocol Team: We believe we can achieve a non-zero-sum game after joining Tron’s ecosystem, and Cell Version 2.0 is in progress. Built on Tron, users in Cell can benefit from extremely low handling fee. With no pre-mining, we hope all miners can join Cell and Tron’s DeFi ecosystem with the most fairness.