The leading digital asset keeps moving inside the frames of the descending correction. However, the chances for the end of the decline and the continuation of the growth are still high.

To confirm the development of the uptrend, the bulls must secure above $9800. Meanwhile, the current levels look like good support, from where the quotations are expected to bounce upwards. The EOS and TRX are ready to resume their growth quite soon. What is more, on D1 of the TRX the buyers are trying to execute the reversal pattern with good goals much higher than the previous levels. The Ethereum and Litecoin remain under pressure and are testing the resistance levels, from where they can demonstrate falling. To change the current situation, the buyers need to break away the current levels.

The cryptocurrency keeps correcting. Currently, the quotations are testing the support level. The structure of the price movement suggests the formation of an inverted Head and Shoulders pattern. As we may see, what is lacking is the right shoulder. As the main trading idea, on the D1 of the Bitcoin, we should expect further development of the correction and a test of $7670; from this level, we may be speaking about the beginning of growth with the first aim at $9800 and the next one at $10990. An important event for the bulls will be a breakaway of the upper border of the descending channel and securing above $11005, which will mean the end of the descending correction and a full-scale continuation of the growth. An additional signal confirming this movement will be a bounce off the ascending support line on the RSI. The positive scenario may be canceled in the case of the breakaway of $6875, which will mean cancellation of the reversal pattern and a decline of the quotations to $5750. 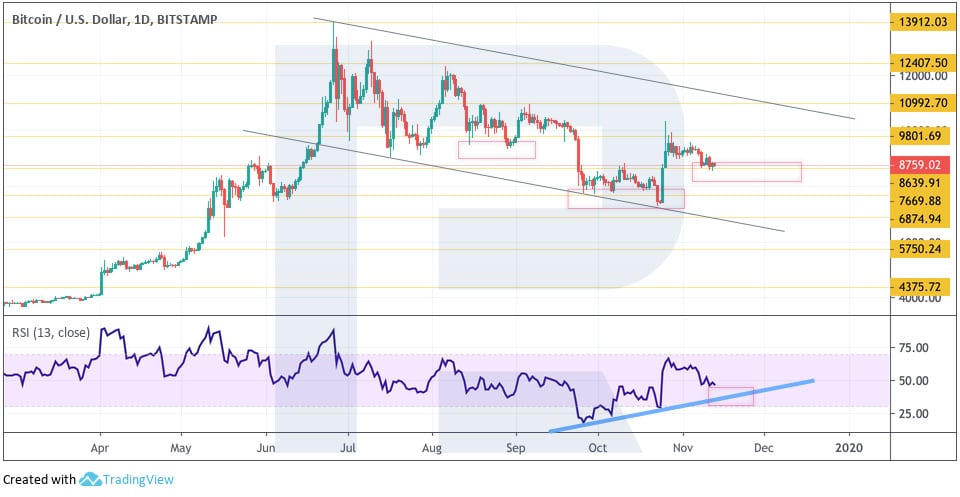 On H4, the quotations are testing the support level. Here, the upper border of the descending channel also lies. While the asset is above $7670, the pressure from the buyers will be present. A bounce upwards may be supported by a test of the support line on the RSI. Earlier, the BTC/USD quotations already pushed off the level 20. The current structure reminds of a Bullish Flag very much so after a breakaway of $9800 we might expect a confirmation of further growth and the beginning of the pattern execution. The scenario may no longer be valid if the quotations fall below $7670, which will point at a test of $6875. 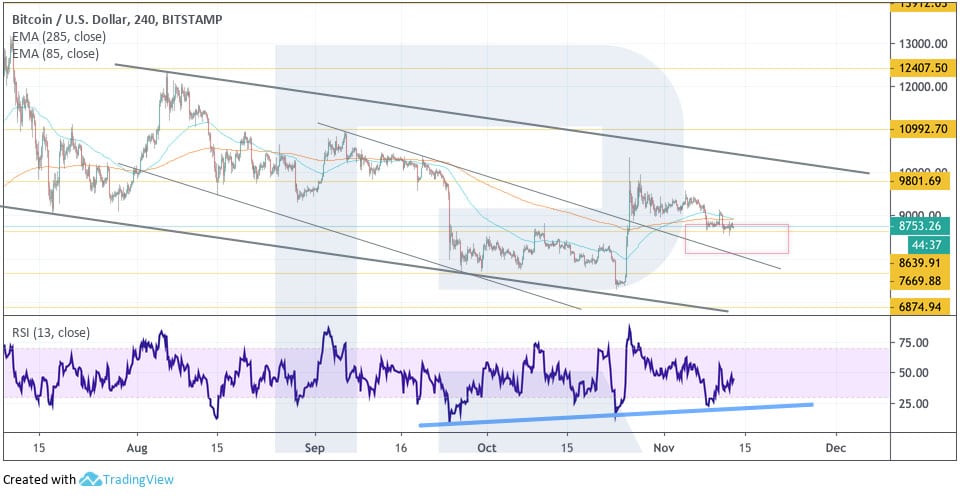 On D1, the Ethereum keeps pushing off the resistance level. Here also lies the upper border of the Bollinger Bands indicator. As the main trading idea, we should expect a bounce off the resistance level at $203 and falling to $150. This movement is confirmed by a test of the descending resistance line on the RSI; earlier, the indicator values already pushed off this line and declined to the nearest support level. The scenario might be canceled by strong growth of the asset and securing above $239. In this case, there will happen a breakaway of the descending trendline on the RSI, which will mean further growth to $320. 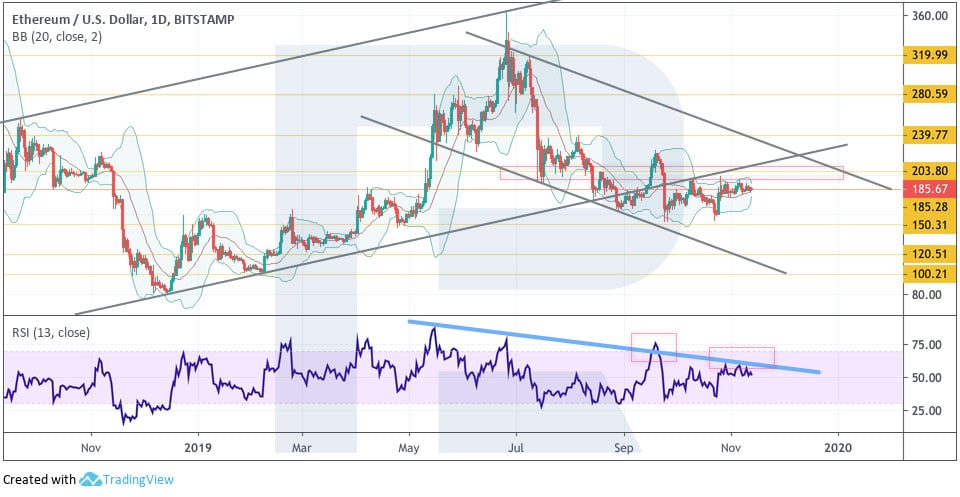 On smaller timeframes, the quotations are squeezed inside the Triangle pattern. On the one hand, it points at some uncertainty and a decrease in the volatility; however, at the moment of a breakaway of a border of the pattern, we should expect a strong movement in the direction of the breakaway. As the short-term trading idea, we are expecting a breakaway of the lower border in particular and a decline to $150. The decline should be confirmed by securing of the quotations under $185, as well as a bounce off the resistance line on the RSI. The scenario may be canceled by growth above the upper border of the Triangle and securing above $200. This will mean an escape of the quotations from the channel and a movement to $239. 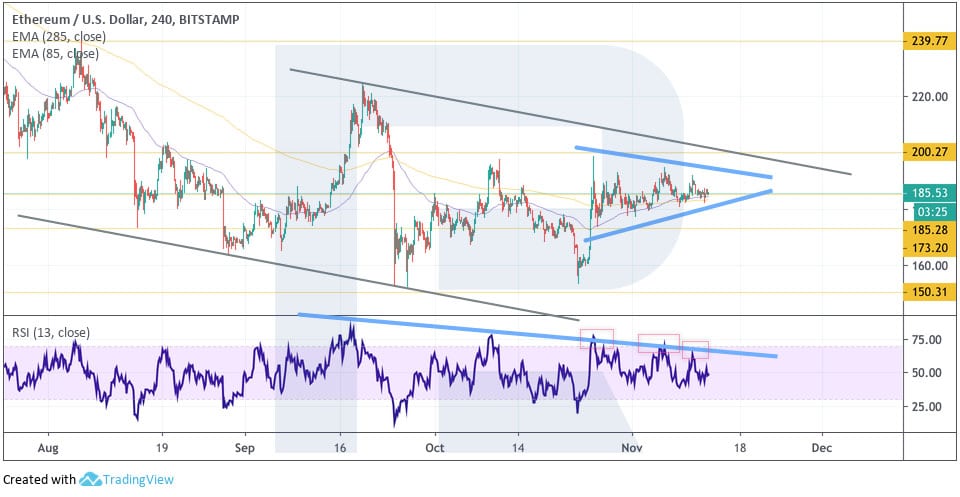 The quotations keep trading above the Ichimoku Cloud, which still indicates an uptrend. The buyers are still applying pressure but the quotations have yet failed to escape the borders of the descending channel. A good signal confirming the growth will be a breakaway of the descending trendline on the RSI. The nearest aim of the growth is $4.30; a breakaway of this level will point at further development of the uptrend to $5.35. The positive variant for the bulls may no longer be valid if the quotations break away the border of the Cloud and secure under $2.40, in which case they will decline to $1.45. 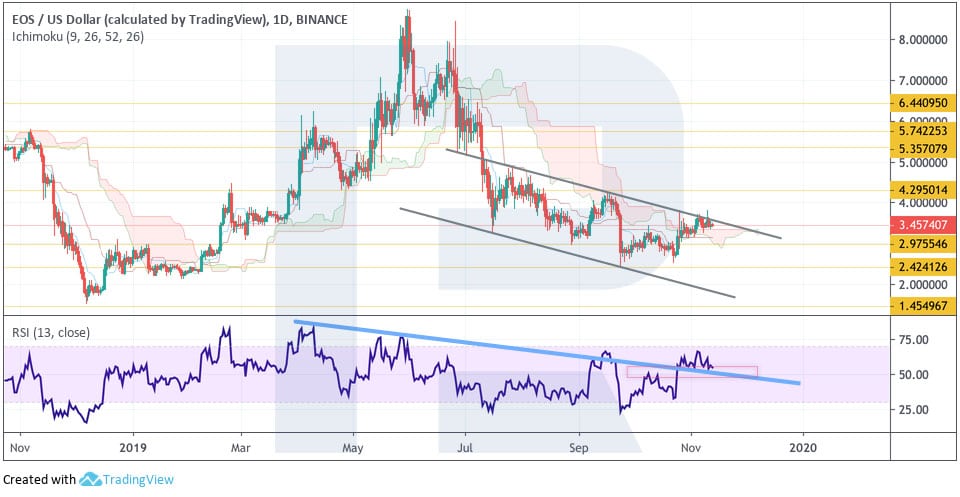 On H4, the quotations are pushing off the lower border of the Cloud. While they remain inside the ascending channel, there will be pressure from the buyers. Further growth is confirmed by a test of the support line on the RSI. The scenario may no longer be valid if the quotations break the support level and secure under $3.15, in which case they will decline to $2.40. 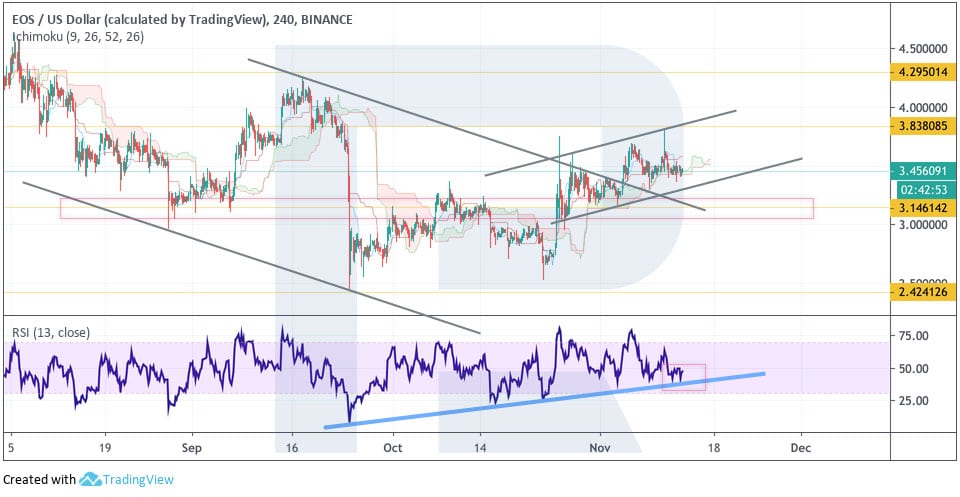 The digital silver remains under bearish pressure. The quotations are testing the Moving Averages, and there is a chance to see them decline from the current6 levels. The decline is also confirmed by a test of the descending resistance line on the RSI. The nearest aim of the decline is at $41. A test of the upper border of the descending channel near $64 should not be excluded either, after which the decline will go on. The scenario might be canceled by strong growth above the MAs and securing above $79, which will mean the quotations have escaped the descending channel and are heading for $107. 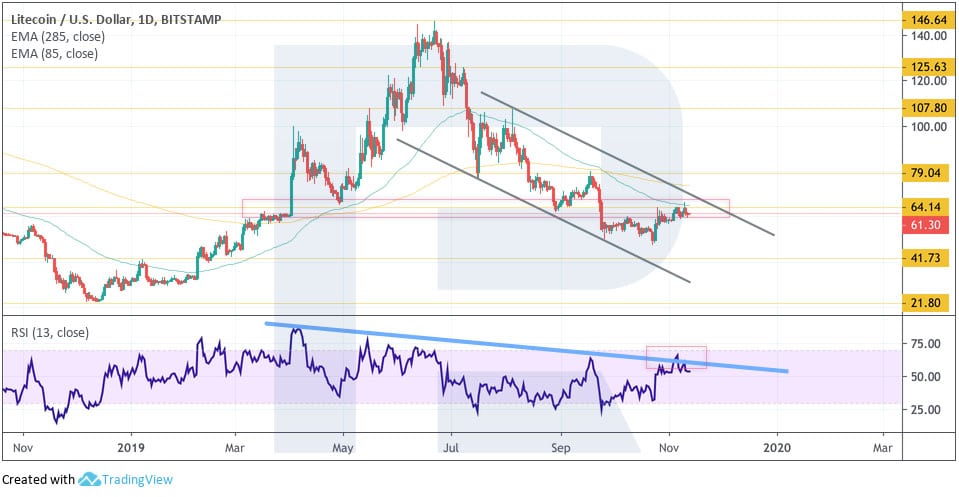 On H4, the quotations are moving inside an ascending channel. If the quotations secure below $55, it might mean the beginning of a decline, a breakaway of the lower border of the channel and the end of the ascending correction. This movement might additionally be confirmed by a bounce off the resistance line on the RSI. The scenario may no longer be valid if the area around $68 is broken away, which will mean the growth of the Litecoin. 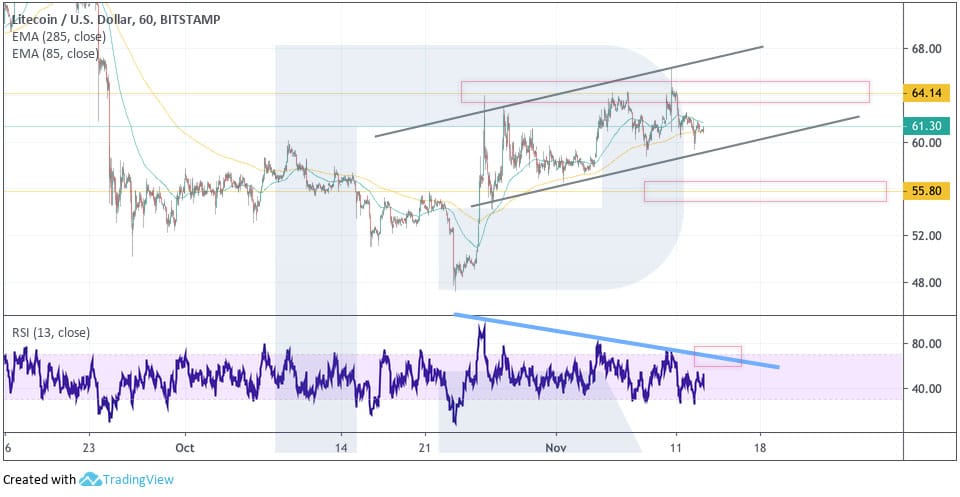 On D1, the quotations are pushing off the middle line of the Bollinger Bands. As we may see, after a bounce off the lower border of the indicator, the price managed to break through the upper one, which indicated bullish pressure. Here, we can also see the neck of the reversal Head and Shoulders pattern, which suggests an upward movement as the execution of the pattern. The nearest aim of the growth is at $0.0272. The positive scenario for the buyers might be canceled if the price falls below $0.0150, which will also cancel the reversal pattern and bring the price down to $0.0109. 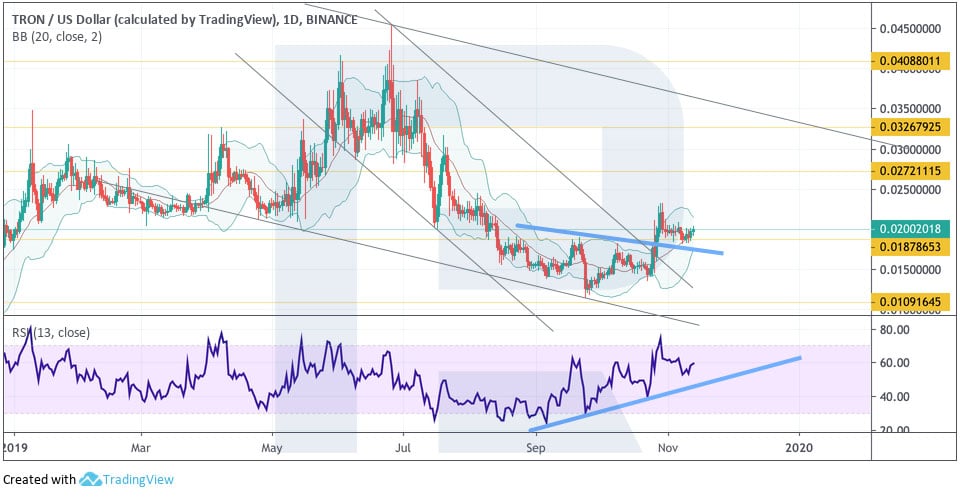 On smaller timeframes, the price is pushing off the lower border of the ascending channel, which also points at the potential continuation of the growth to the first aim at $0.0272. The growth is also confirmed by a bounce off the support line on the RSI. The growth might be canceled by a breakaway of $0.0187, in which case the aim of the decline will be at $0.0109. 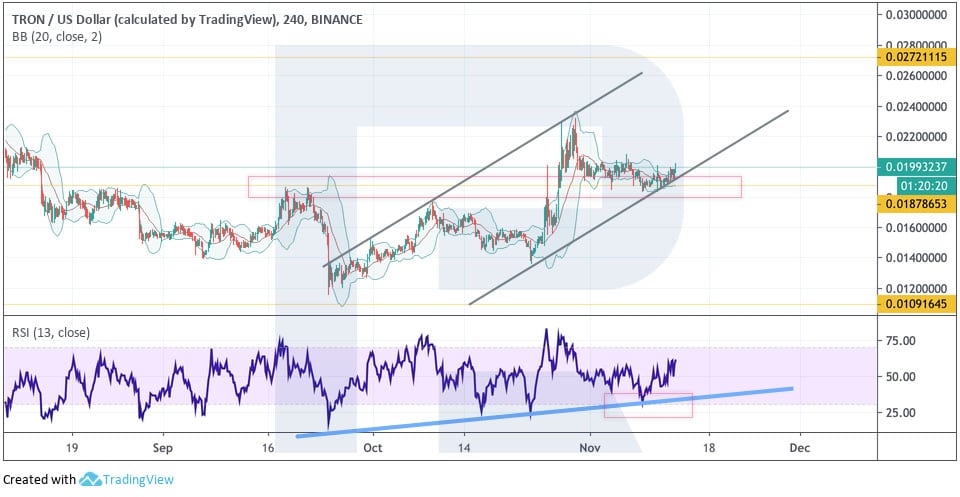