The crypto market remains under the bearish control, all assets – BTC, ETH, XRP, LTC and BCH – are renewing the nearest minimums.

As we see, on D1 of the Bitcoin there is a reversal Wedge pattern forming, promising a reversal and an attempt of growth rather soon. For the bulls, it is important to secure above $7670, which will confirm the development of an uptrend.

What is more, similar patterns are forming on the charts of the Ethereum, Litecoin, Bitcoin Cash. Of course, the main part here is played by the leading digital asset that will pull the whole altcoin market after itself. Unfortunately, the XRP chart looks too weak for a reversal to begin there.

The quotations of the leading cryptocurrency keep declining. Unfortunately, the buyers failed to execute the reversal pattern Failed Swing on the RSI. However, now we are watching a Wedge forming, which in the end might provoke the growth of the cryptocurrency with the aim at $9800. Yet another signal confirming this scenario might be a test of the support line on the RSI. As we see, earlier such a test provoked an insignificant growth of the asset, and currently, with the Wedge forming, we might see a reversal. It will be confirmed by a breakout of the upper border of the pattern and securing of the quotations above $7670. The scenario may no longer be valid if the price falls below $4375, which will cancel the pattern and mean further declining of the Bitcoin. 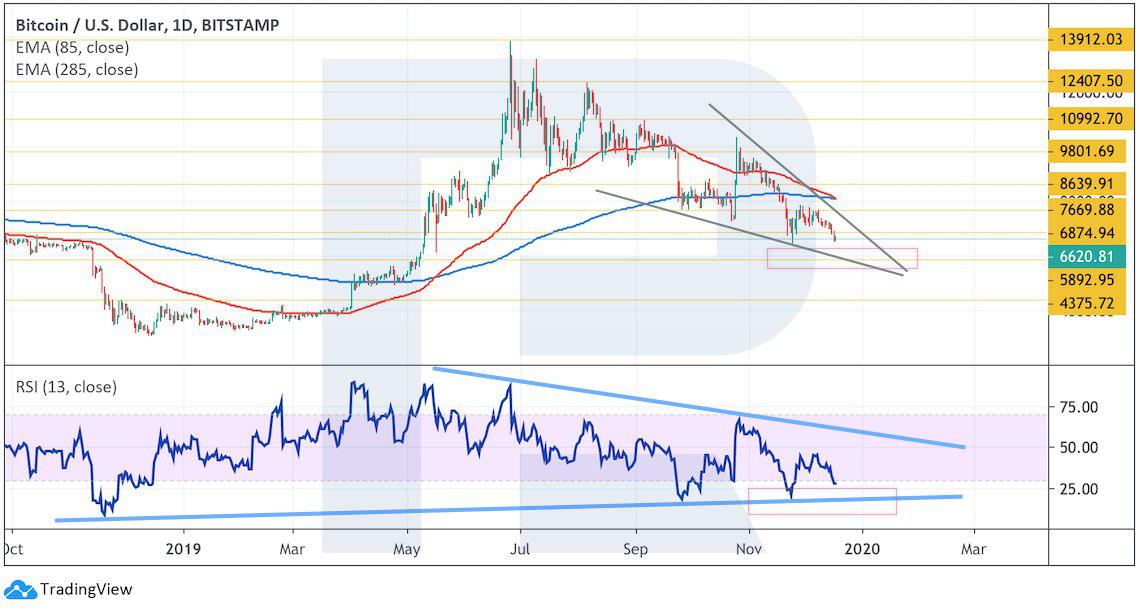 On H4, there is also a potential for a bullish pattern the Wolfe Wave. Its lower border is near $5890. Before the growth starts, we should expect a test of this area. As we see, the RSI values are above the support line, that is why it is important to see the test before the growth. If the prices secure below $5890, falling will continue. 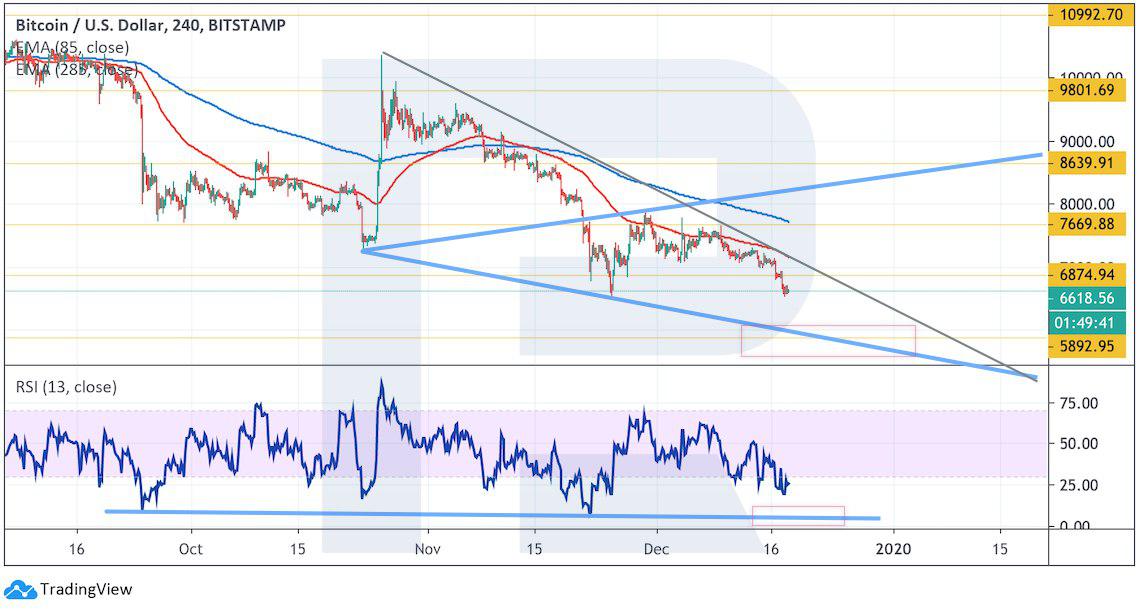 On D1, the cryptocurrency is still declining, the sellers have managed to secure under the support line. The nearest area for a bounce up is at $100. As we see, the Moving Averages still indicate a bearish trend. A reversal might happen on a breakout of the upper border of the descending channel and securing above $200. A bounce off $100 is confirmed by the test of the trendline on the RSI. If the support area is broken away and the quotations secure below $100, the downtrend will continue. 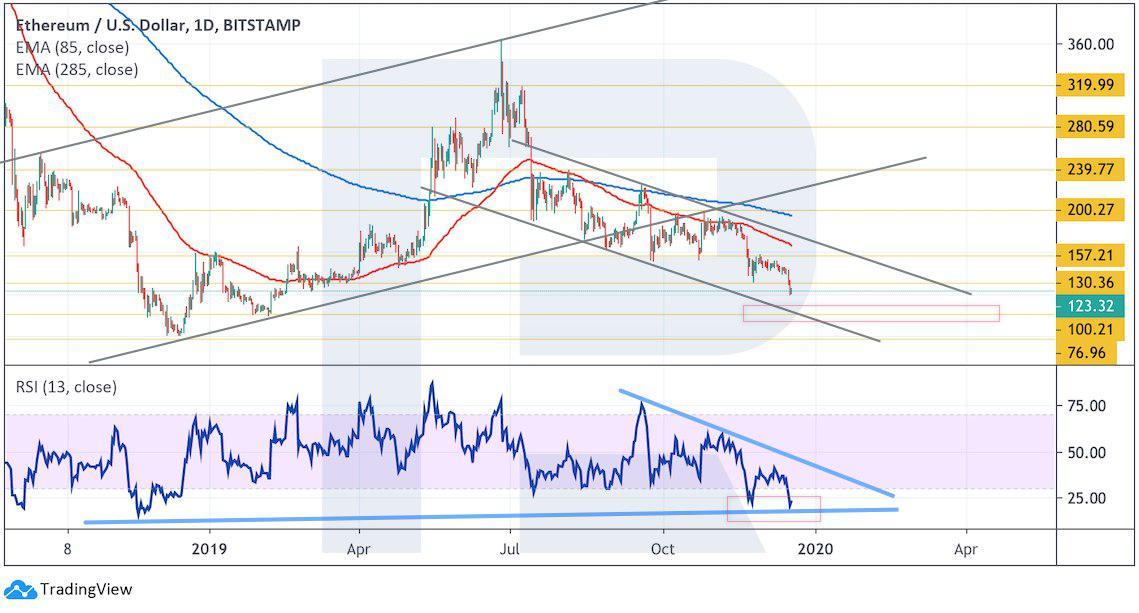 On the smaller timeframes, a bullish Wolfe Wave keeps forming, which suggests the growth of the price above $157. A pattern against the current trend looks aggressive but it may help the bulls stop the decline. Another signal confirming this scenario might be a breakout of the upper border of the Wolfe Wave and securing above $140. The scenario may be canceled by a breakout of $100, which will cancel the pattern. 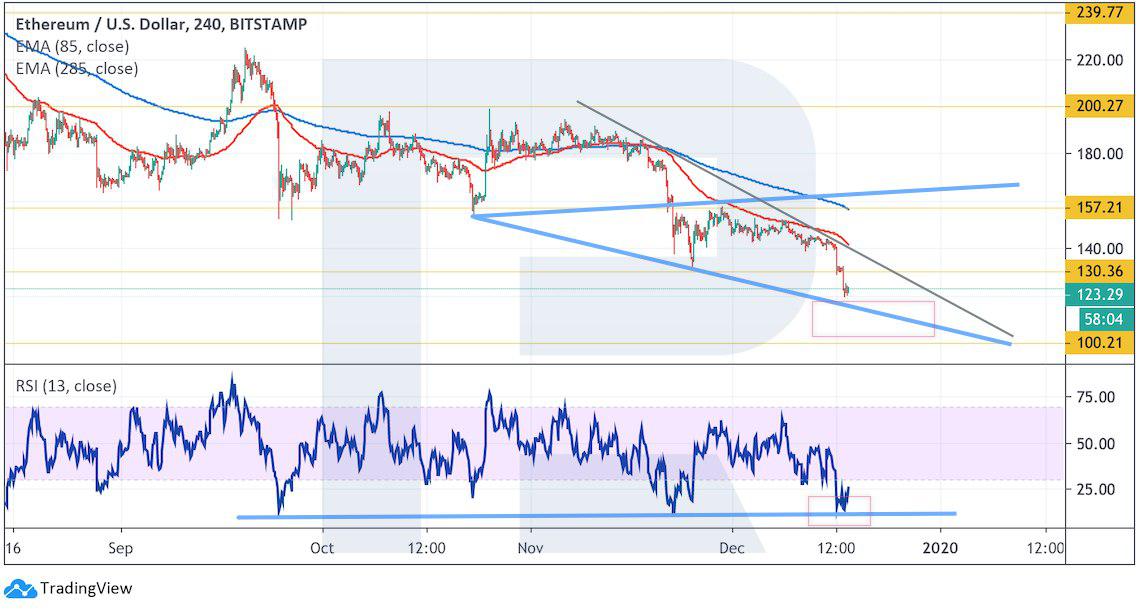 On the XRP chart, the quotations have also broken out the support area. As we see, at the latest test of the upper border of the Bollinger Bands, the prices bounced and broken out the lower border, which signifies a strong declining impulse. However, here the RSI values were supported by the trendline. We should expect minor falling with a test of $0.1485 and the beginning of growth of the quotations. A full-scale reversal might only happen with a breakout of the upper border of the descending channel and securing above $0.2740. The scenario may be canceled by a breakaway of the lower border of the descending channel and securing below $0.1000, which will provoke strong falling even lower. 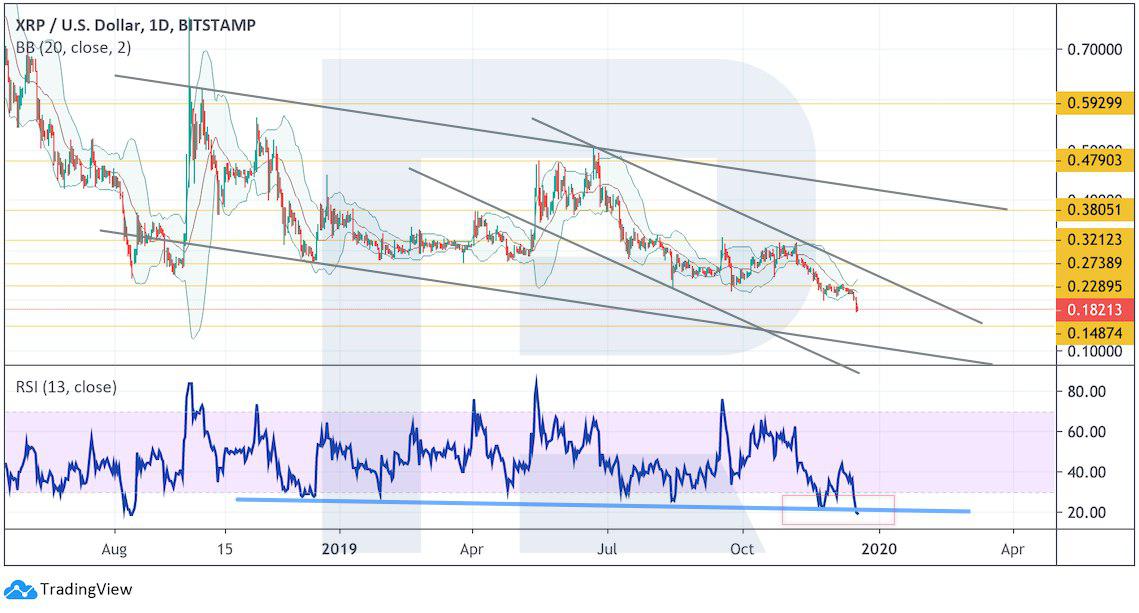 On H1, the quotations are declining in a descending channel. There are all chances to see a test of the lower border of the channel near $0.1600, after which an ascending correction might start. Short-term falling will be confirmed by a test of the descending trendline on the RSI. However, as soon as the bulls secure above $0.2290, an ascending impulse should start developing. 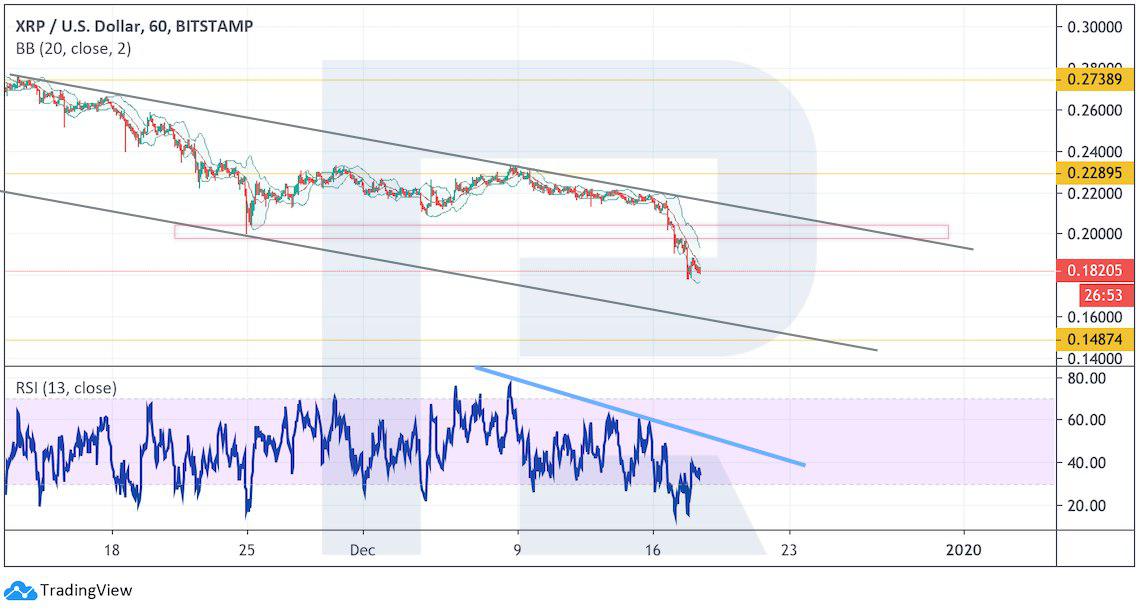 The Litecoin quotations are developing a strong descending movement on D1. But even now, regardless of the bearish pressure, there is a potential for a bounce and the beginning of growth. The RSI values are testing the support line again. So, falling with a test of $42 and an attempt of an upward movement should not be excluded. The growth will be confirmed by a breakout of $50, which will mean an escape from the descending channel. If falling continues below $30, a descending impulse should form. 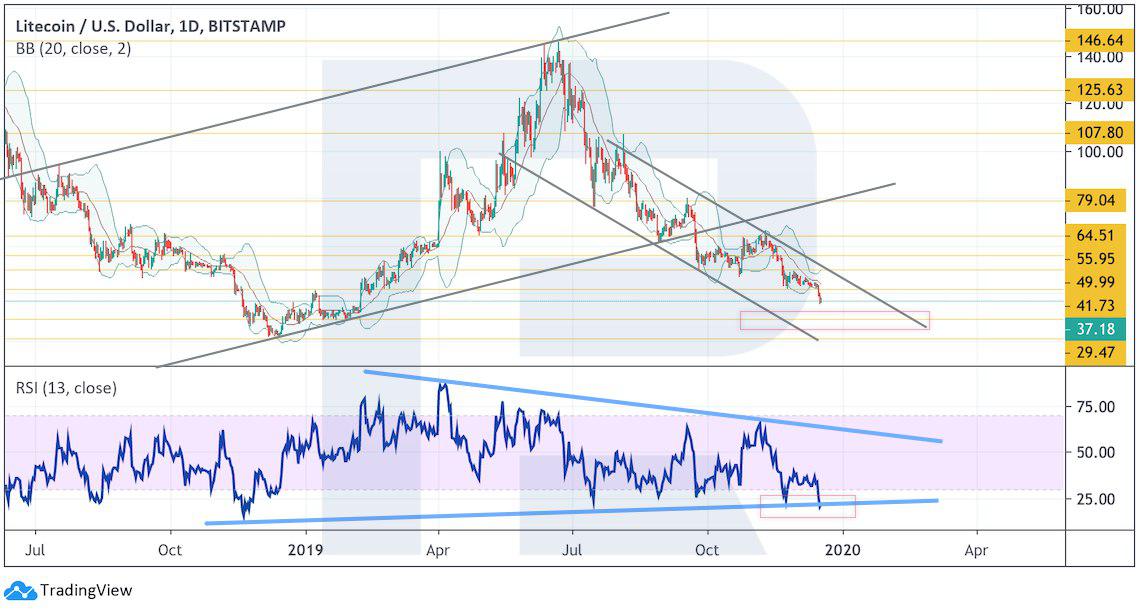 On H4, a bullish Wolfe Wave is forming, pointing at the potential of growth with the aim at $50. A strong signal confirming this scenario will be a bounce off the support line on the RSI. The growth will be confirmed by a breakout of the upper border of the pattern and securing above $42. The scenario may no longer be valid if $30 is broken out, which will cancel the pattern and confirm further falling. 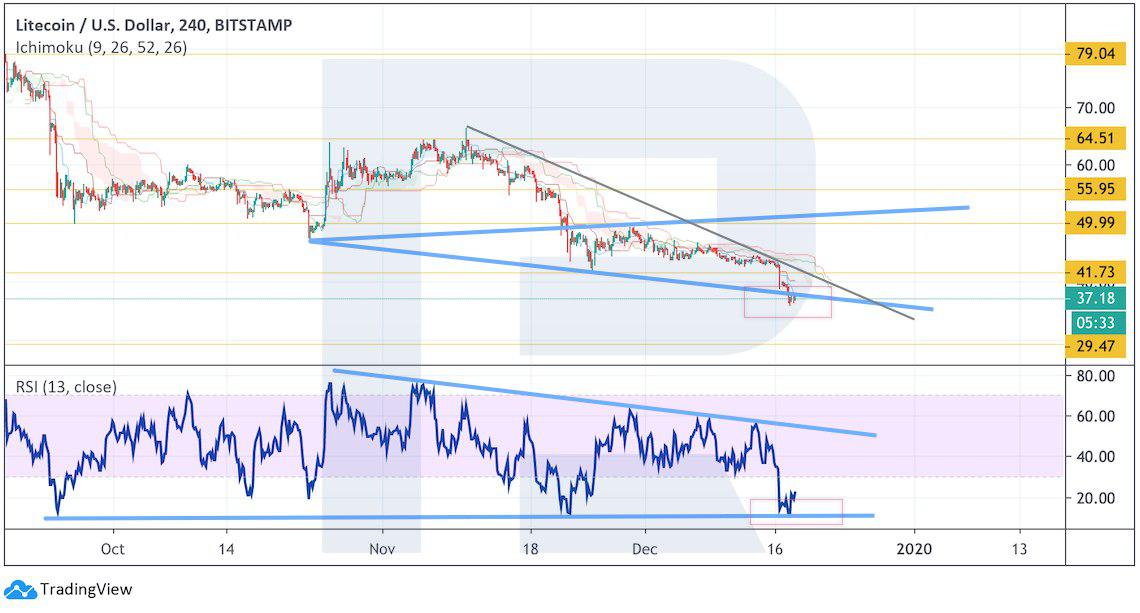 On D1, the prices are squeezed in a Wedge forming. The support line on the RSI is also quite close, which points at falling of the price to $160, after which growth should start. The growth will be confirmed by a breakout of the upper border of the Ichimoku Cloud, which will mean the end of the downtrend and further growth. The scenario will be canceled by a breakout of $160, which will also cancel the pattern. 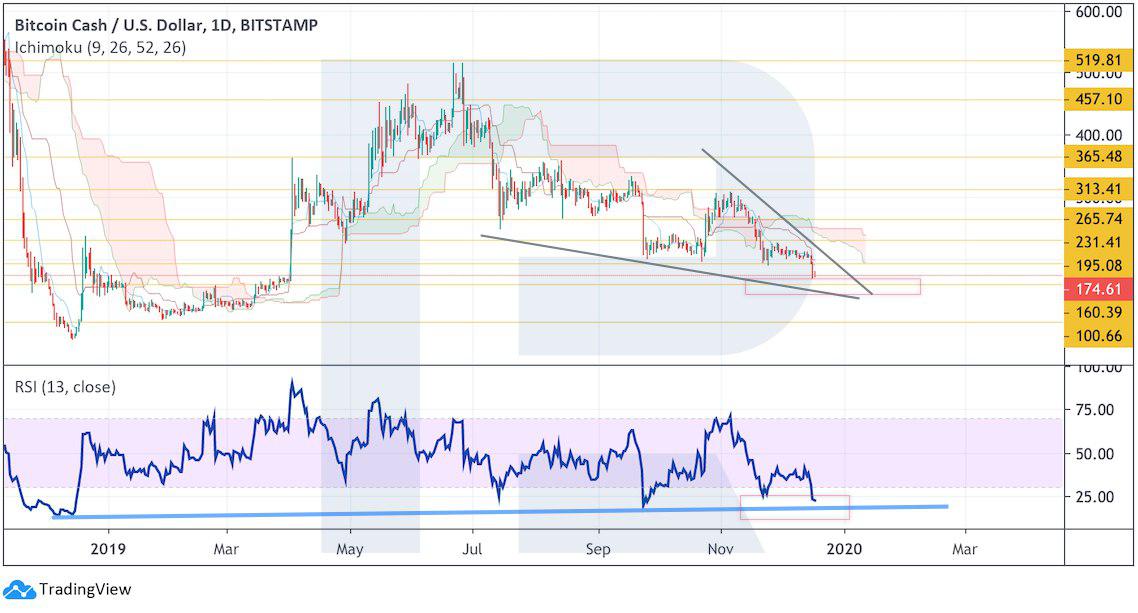 On the smaller timeframes, the prices have managed to break through the support area. Currently, there is a risk to see a test of $160 before the beginning of the growth. Another signal confirming a bounce will be a test of the support line on the RSI. The reversal should be confirmed by strong growth above $195, which will mean an escape from the descending channel. 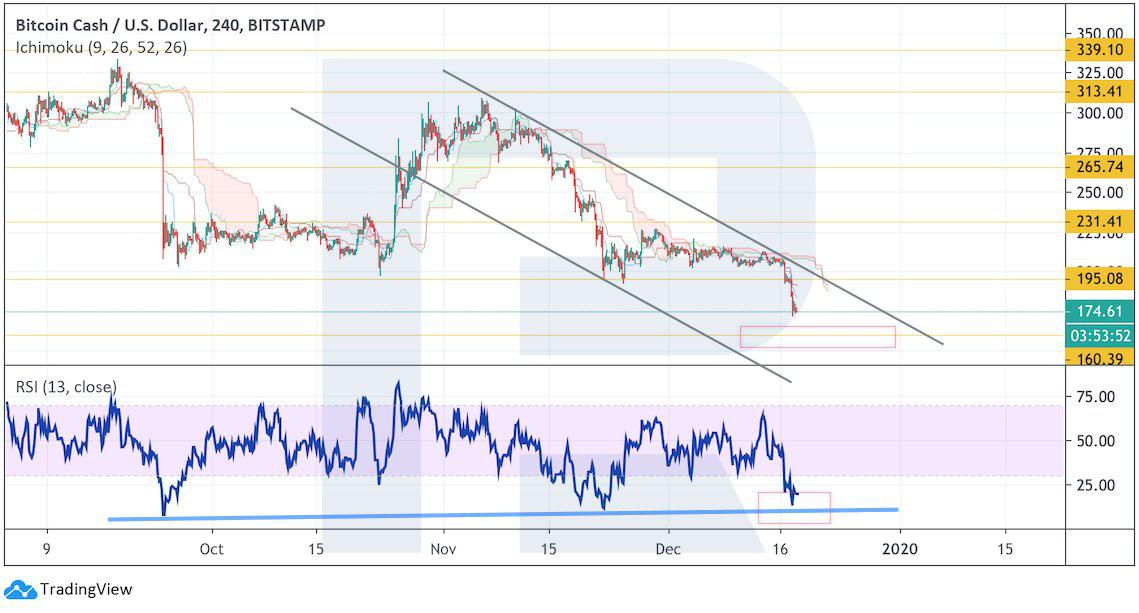