The buyers of cryptocurrency have yet failed to secure above the local resistance levels.

The buyers of cryptocurrency have yet failed to secure above the local resistance levels. There is a risk of a descending correction if the bulls do not move the market even higher in the nearest future. However, even such a correction will provide conservative levels for long positions. As we can see, with a small decline, the market pushed off and the quotations start growing, which signifies strong bullish pressure. The XRP currently looks very weak. It has performed a test of an important resistance level on D1 and has formed a reversal pattern on smaller timeframes. If the market does not demonstrate a decline once again, and the pattern will be canceled, we can be sure about further growth and the presence of influential buyers on the market, who are not ready for the smallest decline.

On D1, the quotations have failed to break out the resistance area yet. At the same time, the prices keep pushing off the middle line of the Bollinger Bands indicator, which signifies bullish pressure and the strength of the current ascending impulse. The key support level is at $9195. A breakout of this area may provoke a serious descending correction with the aim of $7785. As the main trading idea, we should expect a test of the broken border of the descending channel at $9195 and further growth of the prices. Full-scale development of the bullish trend will be confirmed by a breakout of the resistance and securing above $11005. For now, the area between $10500 and $11000 is a high threshold for the buyers. 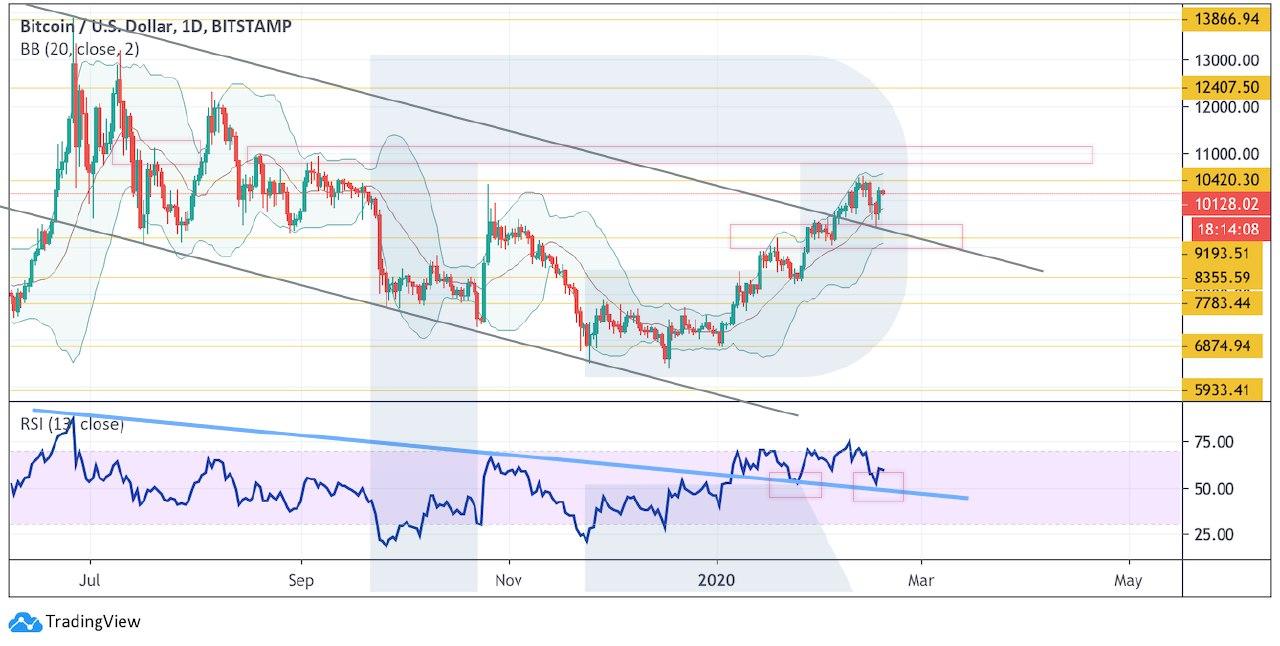 On H4, the quotations are also pushing off the resistance level. The key support level is at $9355. A breakout of this level will signify the end of the growth and the beginning of a descending correction with the aim of $8355. For now, the buyers’ pressure remains strong: as w can see, the buyers pushed off the ascending support level again. So, another test of the lower border of the ascending channel near $9355 should not be excluded, followed by further growth. 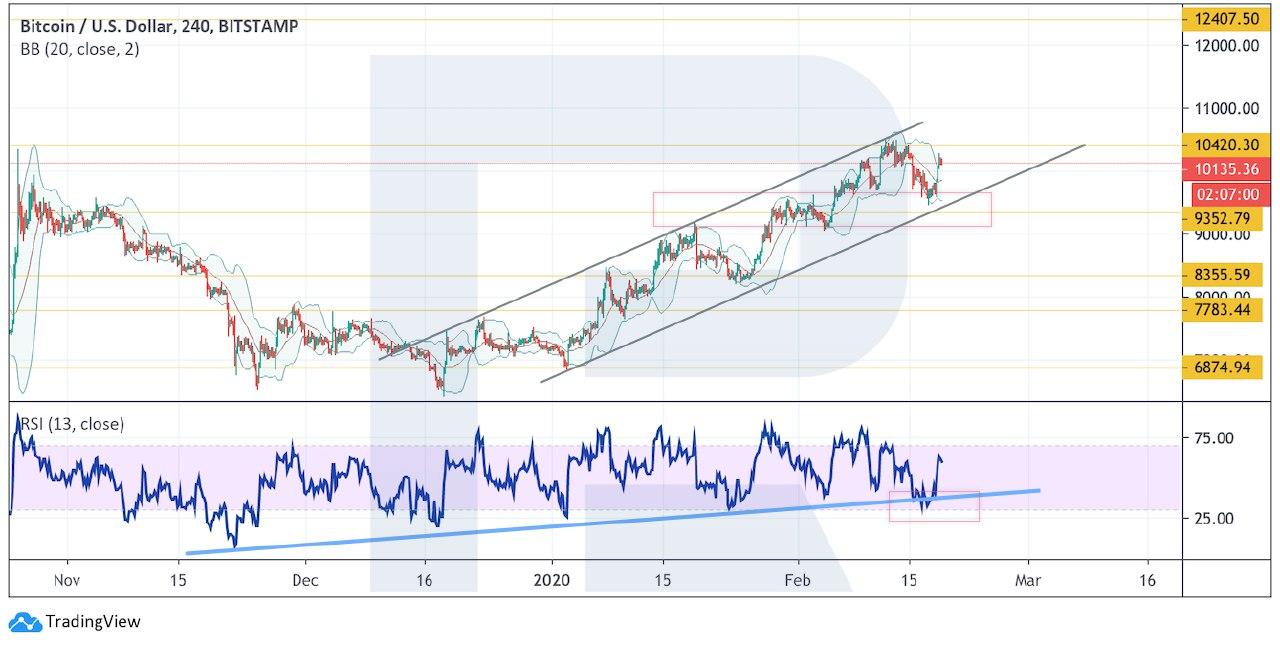 The Ethereum quotations keep going up and are currently testing the resistance area near $285. As we can see, the prices have escaped the descending channel, and further growth with the aim of $385 is highly probable. A strong signal confirming this movement will be a test of the broken trendline on the RSI. The Moving Averages are also revealing the presence of a bullish impulse. The scenario may be canceled by a decline and a breakout of $245, which will signify falling to $200. The growth will be confirmed by securing above $295. 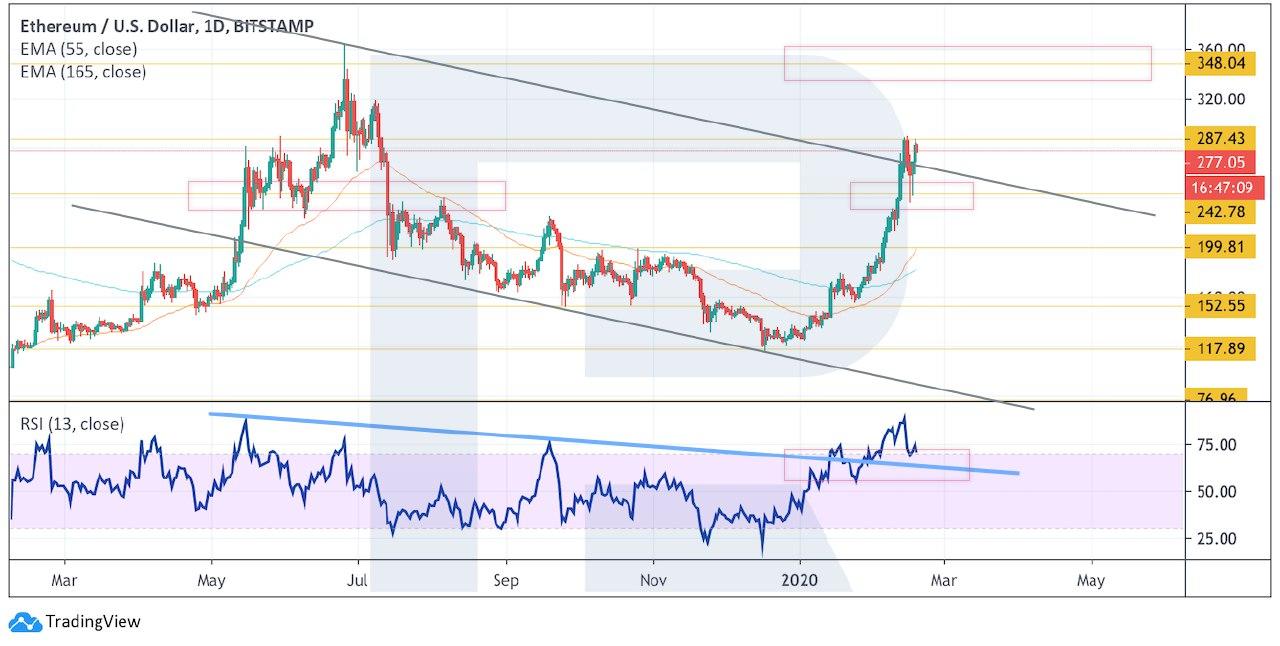 On smaller timeframes, the prices bounced off the MAs for the second time, revealing strong pressure from the buyers. The growth is also supported by a bounce off the trendline on the RSI. The scenario may be canceled by a breakout of the lower border of the ascending channel and securing under $242, in which case we should expect a reversal Double Top pattern to form and the quotations decline to $200 and $155, executing the pattern. 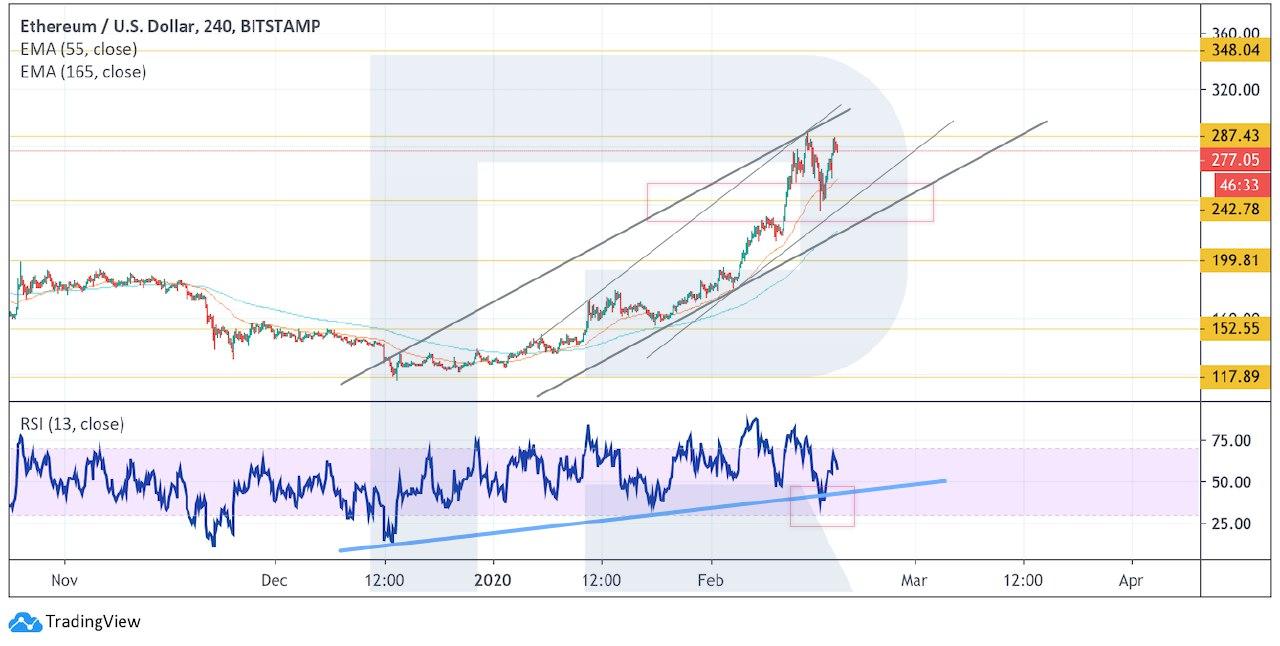 On D1, the buyers again managed to provoke a bounce off the signal lines of the Ichimoku indicator, demonstrating the strength of the bulls. However, the prices have yet failed to rise above the upper border of the descending channel. Such a breakout would be a strong signal of further growth with the first aim at $125. The scenario will no longer be valid if the quotations decline and break out the level of $50. Such a move will provoke a breakout of the lower border of the Ichimoku Cloud and further decline to $35. On H4, the prices have also managed to push off the lower border of the ascending channel. The key support level is at $65. As long as the prices are above it, moving inside the channel, we should expect further growth with the aim of $102. An additional signal confirming the growth is another bounce off the support line on the RSI. If the lower border of the channel is broken out and the quotations secure under $65, we should expect a correction with the goal of $50. 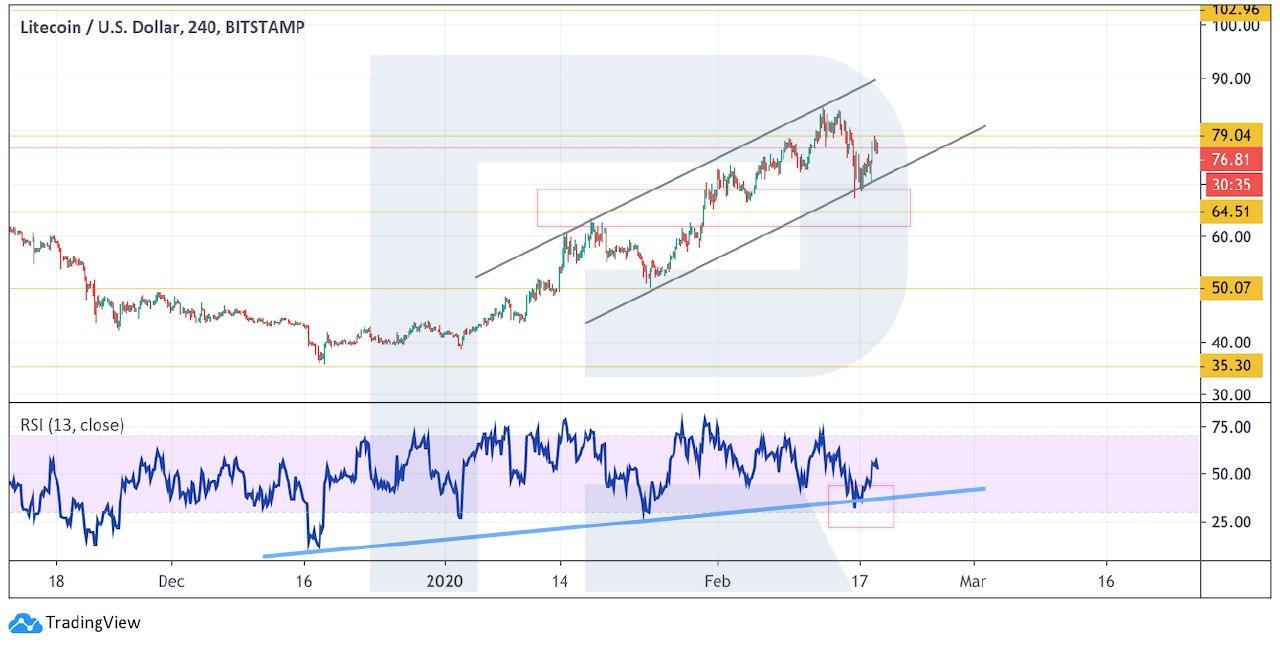 On D1, the quotations have failed to break out the resistance area. Currently, there is a risk of declining to $0.2185. This scenario is supported by a bounce off the trendline on the RSI. Conversely, it will be canceled by a breakout of $0.35, in which case we should expect growth to $0.40. The decline will be confirmed by securing under $0.2685. 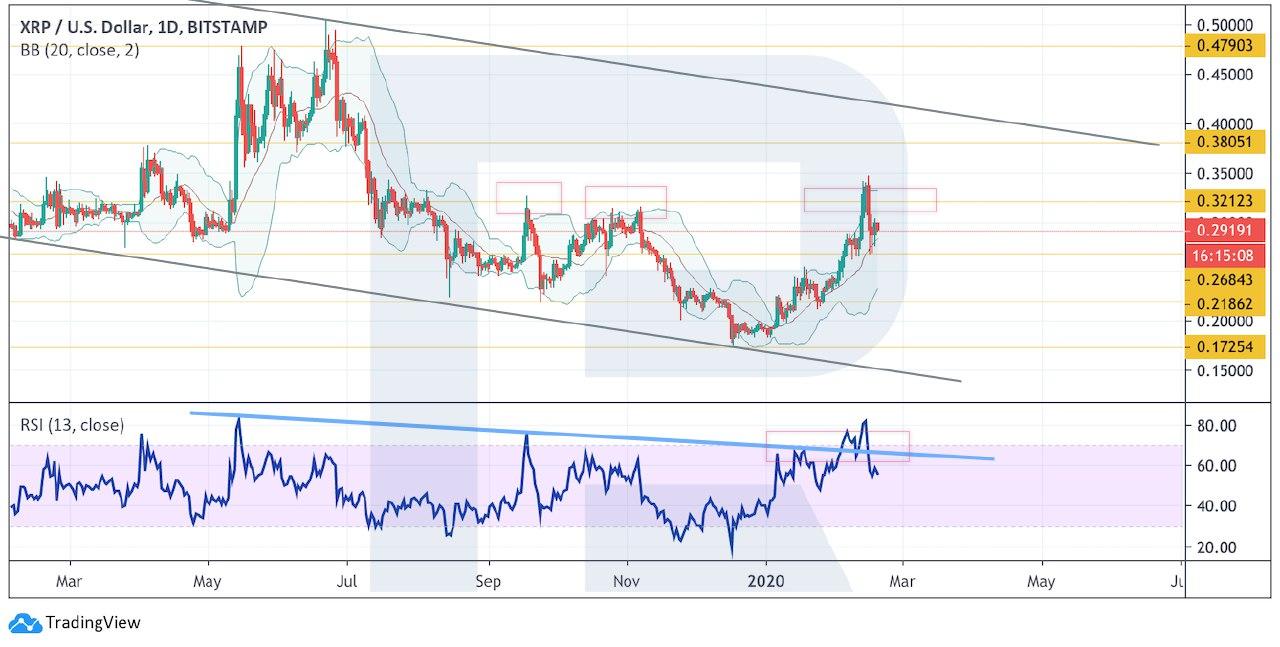 On H4, a reversal Head and Shoulders pattern is likely to form. The completion of the pattern will be confirmed by a breakout of the neck and securing under $0.2655. Another signal confirming the decline will be a test of the resistance line on the RSI. The negative scenario may be canceled by strong growth and a breakout of $0.35, in which case the reversal pattern will not be completed and growth will resume. 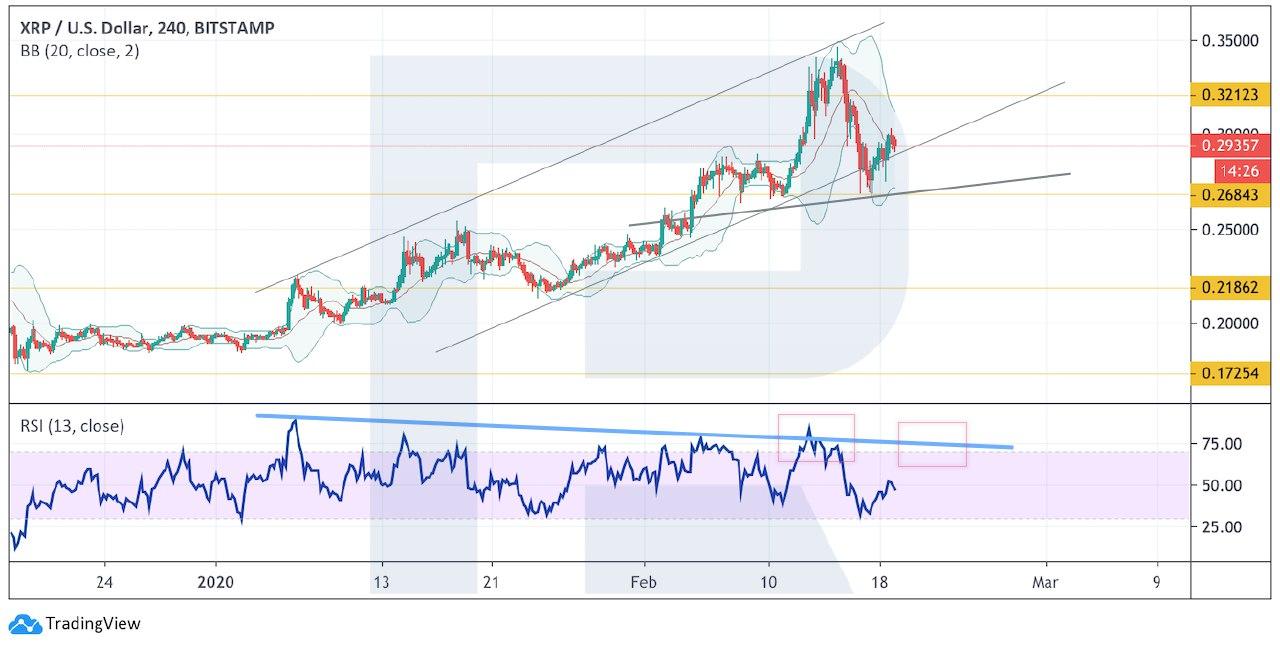 The buyers have failed to secure above the upper border of the descending channel. Currently, there is a good chance to see the development of the descending correction to $410 and then – to $290. As we can see, the support line on the RSI also lies lower, so it might be tested before the beginning of a new wave of growth. The growth will be confirmed by a breakout of $500, which will mean an escape from the descending channel and further growth to $600. 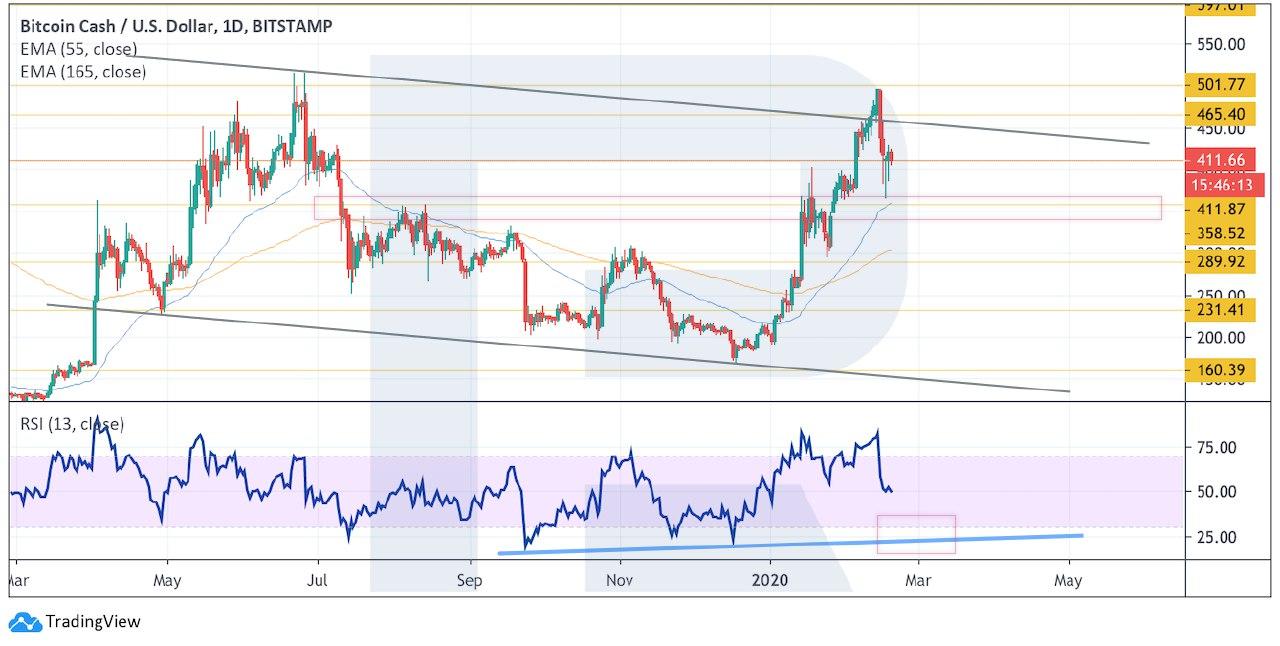 On H4, the prices have bounced off the lower border of the descending channel. They might try to go on growing to the level of $500. Another signal supporting such a movement will be a bounce off the support line on the RSI. The idea will be confirmed by a breakout of the upper MA and securing above $465. The growth may be canceled by a breakout of $405, which will mean further falling to $290 and full-scale development of a descending correction, as indicated on the D1. 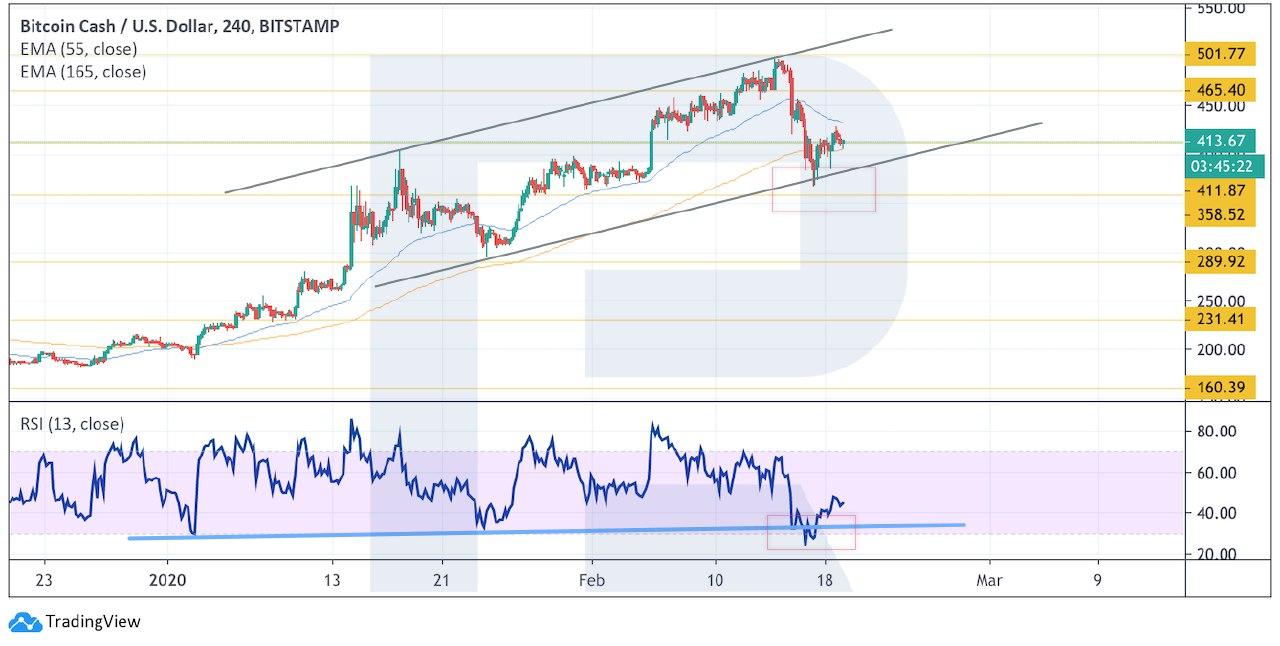 Central American country El Salvador has now almost made a culture out of buying Bitcoin at every possible opportunity.

JPMorgan believes that the worst of the crypto market is over and expects Bitcoin to show potential upside along with the S&P 500.