CU (Crypto Universe) IDcard is committed to providing users with the first ID card in the encrypted world. It enables users to obtain the governance and identity rights of the encrypted world. From then on, the identity on the chain is not only a string of codes but also represents the decentralized spirit of blockchain across international and regional areas. Cu IDcard welcomes players from all over the world to join in and form a family.

The Background of the Metaverse CU ID Card

Metaverse (meta-universe or virtual world) is regarded as a new digital form, an upgraded iteration of the Internet, and may become the technical basis for promoting the operation of the future world. It’s a continuous virtual space that can be shared. In this virtual space parallel to the human physical world, metaverse acts as a bridge between the real and the virtual, It allows us to play, socialize, consume, and so on through virtual identity.

At the same time, it also expands our vision, hearing, and touch, integrates digital objects into the physical world, and allows us to enter a completely immersive 3D environment at any time. This series of technologies are collectively referred to as extended reality, extended reality (XR). 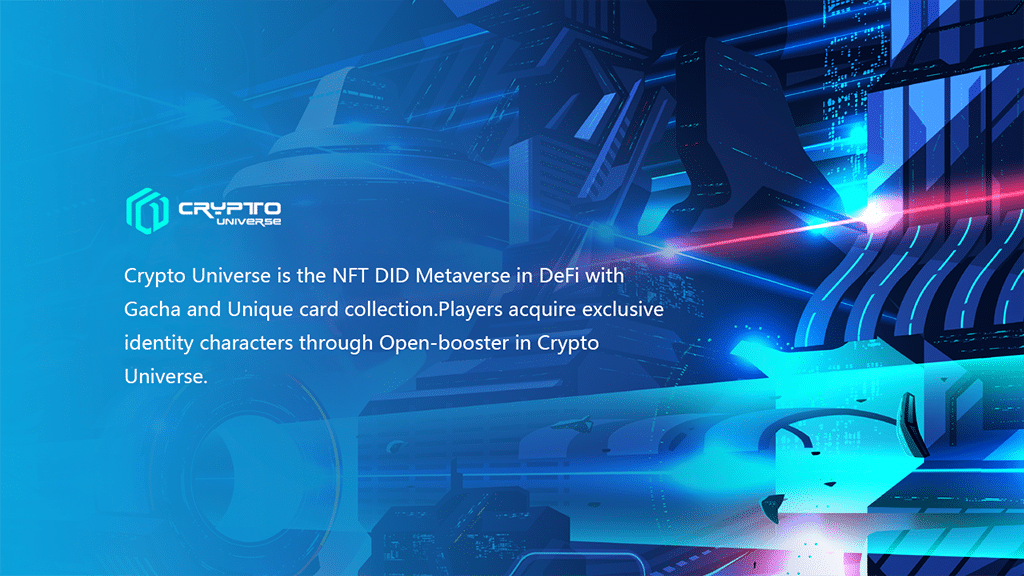 Overseas industries will invest trillions of dollars in the metauniverse, this emerging field is shaping a new Internet paradigm!

What Is CU ID Card?

CU (Crypto Universe) IDcard is a set of on-Chain ID cards. By integrating the information on the user chain in NFT, a set of unified on-chain identity systems used in metaverse is constructed. The first batch of IDcards is limited to 100000, and each NFT is given different roles in advance. In order to distribute fairly, the blind box method is used for random extraction. If interested about this,pls stay tuned on our website.

By connecting a validated social profile (web2 ID) with a blockchain (Web3). Use encryption proof and zero-knowledge proof to create blockchain proof: encrypted proof connects verified identifiers (such as email, phone number, or social data such as Google, Apple, Twitter ID) to the wallet. It allows you to use social identity through smart contracts and other web services, with no harm to privacy.

Cu IDcard reshapes the game through NFT, and players can create and obtain value in Crypto Universe; Developers can develop interesting games based on the identity of Cu IDcard to capture the value of Crypto Universe.

Why Do We Need CU IDcard?

In metaverse, identity is the most basic component. This identity is equivalent to the account of your game. In the traditional Internet, your game accounts are not interconnected with each other. However, due to its highly social characteristics, metaverse can transcend space limitations and share virtual environments with people from all over the world. Players can explore on metaverse with a unified identity, Unified management of objects acquired in the process of multiple world explorations will profoundly change the way we communicate and interact with each other. It has great scalability and can make hundreds of millions of virtual characters coexist in the world. 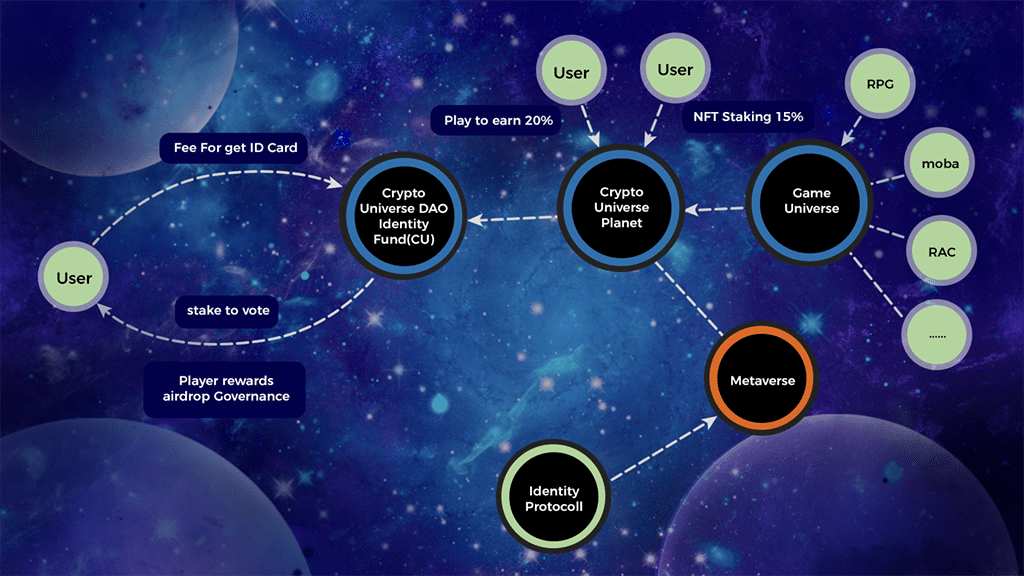 Two identities NFTs can generate a new identity NFT, and eventually create a cyber universe. In this universe, there will be multiple kings and multiple identities. Identity NFT will continuously airdrop governance tokens based on crypto universe Dao. Different identities will reproduce, and it is possible to generate new advanced NFT. This kind of play has a social effect and you need to find a new address (new person) to get your identity.

Encrypted World Pass NFT is characterized by scarcity of quality, limited initial issue quantity, and only one auction for the first issue. The rare NFT is designed by famous designers and has high collection value.

New users in the encryption circle need to participate in a more friendly way, but CU IDcard does not have complicated financial logic and helps users to establish encrypted identities in the form of games. The threshold for participation is low, which is easy to accept. Users get CU IDcard, which means they have acquired the identity in the chain, become a member of the encryption world, acquire the identity and governance rights of the encryption world, and have social attributes. It can be displayed and interacted through social media, so it is very likely to become an explosive application for hundreds of millions of new users.

Users can create and link a game ecology based on identity ecology, and constantly build new games on the basis of identity. Through unified identity management, they can accomplish almost everything in the real world in different virtual spaces-go to school, entertain and socialize with others in the virtual world, and buy products of their favorite brands. Watch your idol’s live concert, even make money in virtual work and convert it into real money, link other game universes, etc. 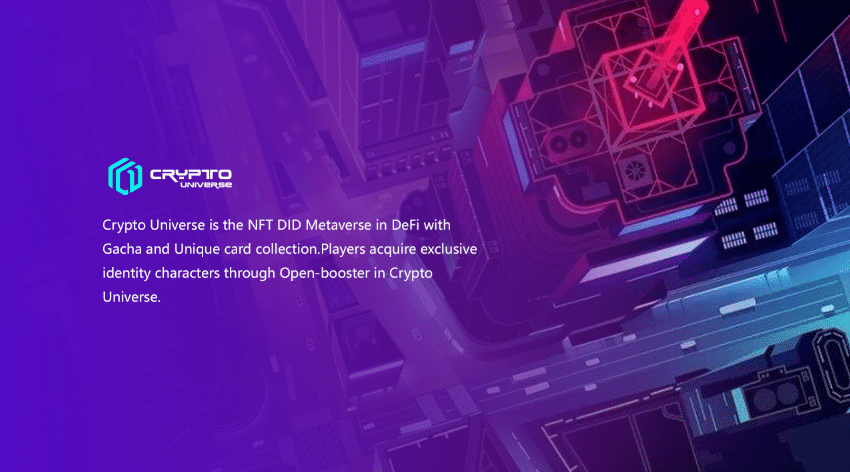 Crypto Universe is an encrypted meta-universe, where there are many livable planets. When chaos first started, it was just a wildland, uninhabited. A group of adventurers came here to explore, accidentally acquired a livable undeveloped planet, and became kings, but the planet needed to be developed, so there were later builders, governors, destroyers, and residents. There are many planets in the universe, and each planet goes through this process. After all the planets are occupied, they gradually prosper (corresponding to reproduction) through the continuous construction of players, and are constantly divided into many countries.

In this process, new kings of the kingdom are born constantly. After the construction, the universe is very prosperous and full of all kinds of rare treasures. Attracted many residents of other universes, Come here to settle down and play, so the universe has formulated a unified identity rule (identity agreement) and world rule (governing DAO). People who come here to live can live legally only if they have the identity of the universe. Newcomers will expand their territory and build their own kingdom and ecology here. CU IDcard is the unified identity system of the universe.

The adventurers refer to the first batch of players participating in the project (the first batch of players are ancestor IP, with a limited number of 10,000). The adventure process is similar to blind box lottery. The extracted identity characters are king (owner), builder (hacker), governor (minister), ecological destroyer (whale), and resident (player). Each king can build a NFT machine gun pool belonging to his own kingdom. Players and new explorers can participate in the machine gun pool to obtain the profits of the kingdom. The first batch of player identities is limited to 100,000. After the subsequent open identities are activated, players can directly activate the player identities, but the character attributes are no longer generated, and can only be obtained by reproduction.

How to Participate in CU IDcard?

According to the information in the white paper, the project will build a set of game ecology in Crypto Universe based on identity system in the future. Each character will have different game background and authority, and play different roles in different planets. Meanwhile, other games will be introduced to carry out ecological cooperation, and a game ecology of the whole meta-universe will be established.

If you haven’t got the collection avatar of cryptopunks, you can get your own encrypted ID card. Besides the collection attribute, you can also get the identity right and governance rights of the encrypted world. It is Cool to think about it!

To encourage platform growth and further expose its benefits, Crypto Universe (CU) is hosting the worldwide NFTs Artwork contest in website. We look forward to asking artists and creators to build with us, and bring in even more creative minds to expand this great innovation to unprecedented heights. If you would like to know more about us, please click here.