Bobby Lee, one of the co-founders of the Chinese BTCC exchange, has recently shared his opinion and called on the public to focus on the drastic difference between blockchain and the traditional database.

People don’t realize that Blockchain should be distinct & different from Databases, invented decades ago!Bitcoin’s real Blockchain was only invented in 2009.
Everyone using a digital ledger is calling it Blockchain, w/o regards to functionality.
Complete intellectual dishonesty!

To tell the truth, he pointed out an exceptionally common mistake that, pretty much, 90% of media is reproducing one article after another — that blockchain is a digital ledger, no it’s not.

Blockchain contains the whole history of all the changes in the database, while digital ledger only processes the final condition of the accounting. This is fundamental.

Yet, in the arguments, there is another widespread mistake, virtually claiming that the only difference between blockchain and “Databases, invented decades ago” is an ultimately trustless environment, like that in Bitcoin. Some may explain this by the fact that opinions differ and it’s just a yet another subjective idea of one of the influencers in the sphere. But, here in this article, we will come up with arguments and try to explain why we don’t agree with Bobby Lee.

Let’s Start With the Base

The Scale of Decentralization

We have reviewed the definition of the technology, in general. Yet, it doesn’t contradict with Bobby Lee’s claim. More than that, it rather confirms it. But the fact is that the above-stated definition doesn’t determine the level of decentralization that should necessarily be encountered in every blockchain-based accounting system.

We affirm that blockchain makes sense in the accounting systems with absolutely different scales of decentralization. 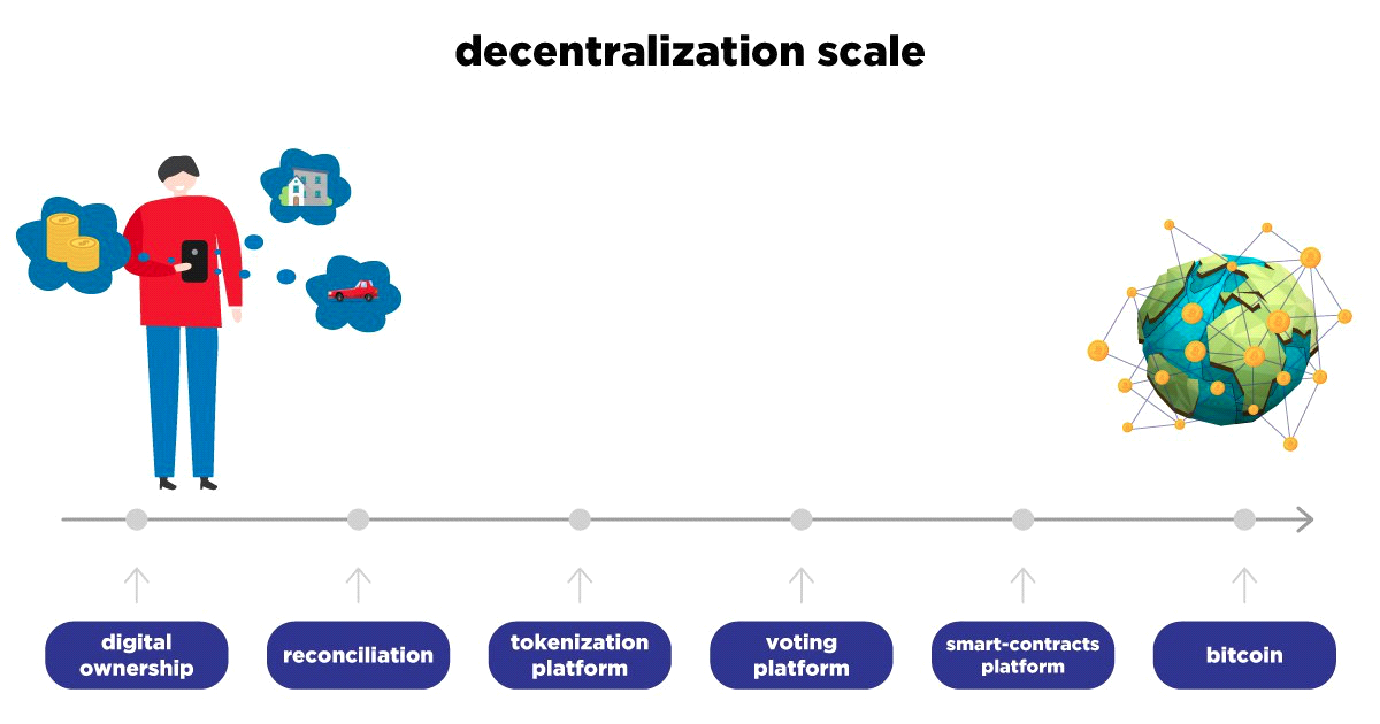 In each case, participants have to reach consensus. Depending on the terms, different mechanisms can be applied:

Let’s consider the two basic edges of our scheme.

Here, decentralization is on the uppermost level. The amount of validators is never defined because anyone at any time can become one. Essentially, you have an unknown amount of anonymous validators. So, how would you make them work seamlessly, as a single organism? Before the advent of Bitcoin, there was basically no way of solving this issue.

Satoshi Nakamoto did solve. Blockchain technology (that provides a flexible data alignment) in combination with proof-of-work (up to this day, the most reliable mechanism of reaching consensus) allowed for an ultimately transparent environment, where users are highly motivated to independent and honest work. Indeed, that’s an incredible breakthrough in the way we interact. This is the case of a complete decentralization, where blockchain introduces the utmost of properties it may ever give. Still, it doesn’t mean that blockchain application becomes senseless as the level of decentralization decreases.

Even if we speak of a complete centralization, where all servers of the system belong to one owner whom you should fully trust, blockchain still enables certain benefits against the traditional databases:

Let’s say, the platform of digital proprietary rights. Obviously, such accounting system would require complete trust towards the organization that maintains it. But the owner may grant regulators (or anyone else) with auditor nodes that would be assuring that all changes in the database are carried out correctly. This is done autonomously and in real-time. While, having a traditional database, we usually deal with annual auditor checks or other scheduled inspections. They take a lot of time and efforts and presume the digging through the archives because digital ledger only stores the final condition of the database. Blockchain stores the whole history of all changes.

Properties that Blockchain May Give

Now, let’s examine the heart of the matter. How the properties that blockchain provides vary according to the environment where it’s being implemented. 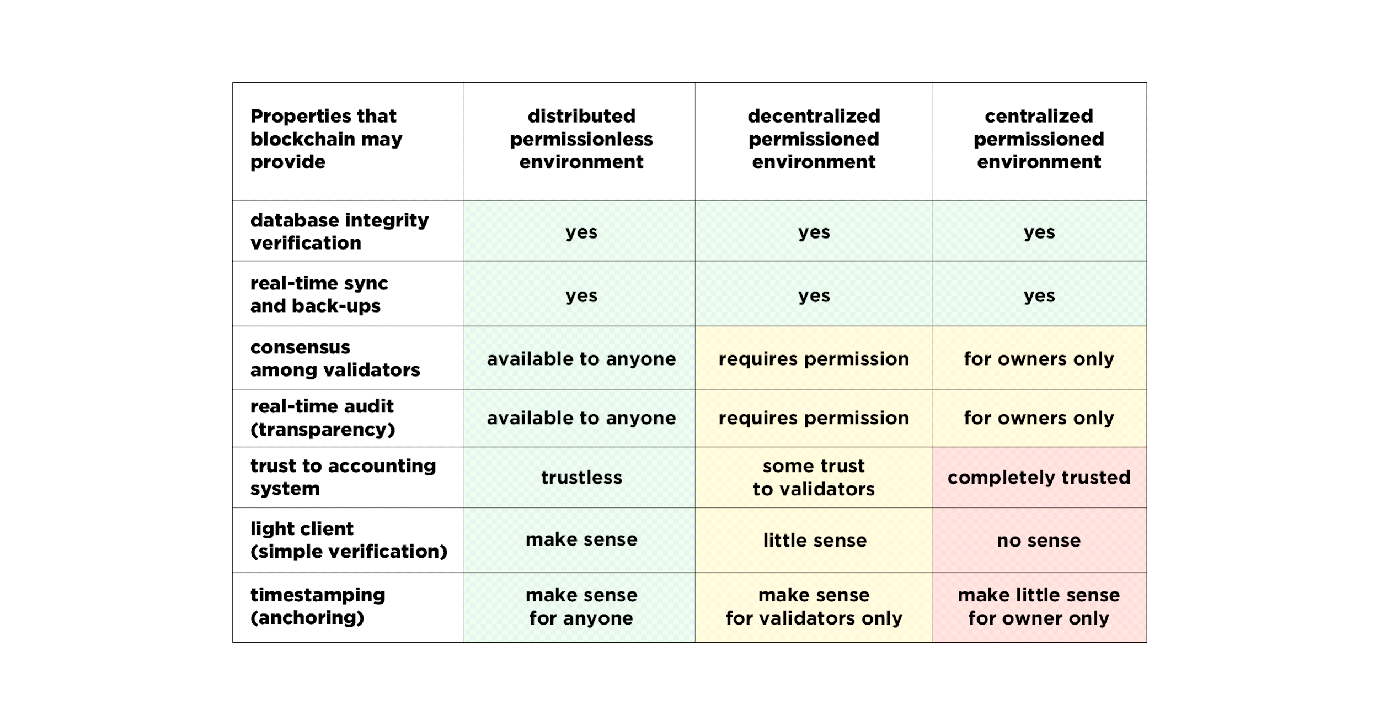 Basing on the chart, we can point out three levels of decentralization (Left to right):

It’s remarkable that in each specific case, the level of users’ trust towards the accounting system is different. This is the most significant distinction that primarily relies on the total amount of validators and their motivation to independent work. Not even honest work, but independent. Because namely the sufficient amount of independent validators can almost ultimately eliminate the trust factor towards the system.

Up to this point, we can conclude that blockchain-based accounting system achieves its maximum advantage in a completely decentralized environment. Though, in business, you hardly ever need complete decentralization, as it’s in Bitcoin. Still, it doesn’t mean that blockchain is not applicable to business. In fact, it’s more than just applicable, because provides for certain absolute properties regardless of the decentralization level. Let’s review them again:

Obviously, it is a misconception to claim that the only blockchain is the cryptocurrency case. And of course, it isn’t right to count on such blockchain in terms of business perspective, because you cannot monetize what is completely decentralized. Well, that’s what many ICOs try to do today, but that’s not a long run game 🙂

For the record, Satoshi Nakamoto never defined blockchain as an anonymous decentralized accounting system. Blockchain is a technology. The methods of its application can vary, while the level of decentralization is only the parameter, the value of which relies on the requirements.

The key problem today is that people cannot agree with each other, due to the reason that all speak different languages. The whole industry might experience negative consequences unless we define the clear terms. Those who see blockchain as a revolution cannot cooperate with those who make use of the current hype just to pump money out of the ‘hamsters’. For starters, they at least need to start understanding each other.

Dr. Pavel Kravchenko is the founder of Distributed Lab, blogger, cryptographer and PhD in Information Security. Pavel is working in blockchain industry since early 2014 (Stellar). Pavel's expertise is mostly focused on cryptography, security & technological risks, tokenization. He considers the company's mission in a creation of an open ecosystem that uses uniform payment and asset management protocol - so-called ”financial web'’.

RoboApe (RBA), an upcoming meme coin, and Shiba Inu (SHIB), an established cryptocurrency, are the two coins we’re taking a look at today.