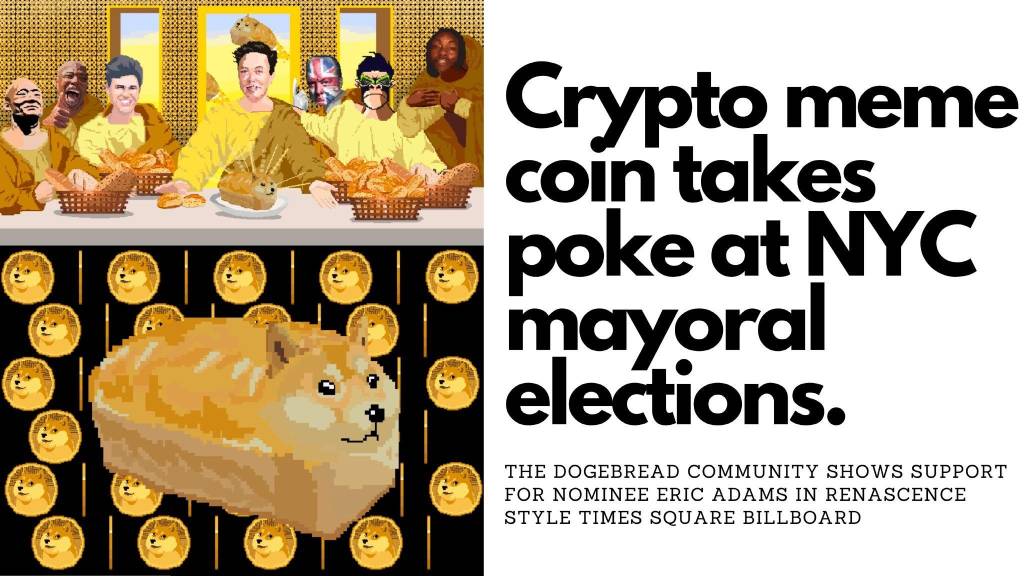 The billboard also hosts crypto influencers tech mogul Elon Musk, Crypto Messiah, The London Crypto, Jason CryptoApe and Da Crypto Monkey. Individually well known for their support of cryptocurrencies, these titans of crypto have been brought together for the first time in homage to Leonardo da Vinci’s The Last Supper. At the centre of the table under the dazzling Elon Musk sits the humble DogeBread – a loaf of bread with the face of a Shiba Inu photoshopped onto it. For Doge fans, it can’t get much better.

The billboard artwork will be available as a limited mint NFT, and all proceeds will go to further development of the DogeBread project.

DogeBread is a passion project by the crypto developer and entrepreneur Kyle Sperling, a 21-year-old Australian living in a mechanics garage in Cairns, Australia. Kyle is single-handedly making a stand against the trend of anonymous developers that can too quickly vanish with investors’ money.

To promote 100% transparency, Kyle is on live video 24/7 in the DogeBread official Telegram. He even sleeps on camera so investors can feel safe knowing where their developer is at all times. The video stream is used as a platform for guest speakers and AMAs (Ask Me Anything). Kyle is rapidly emerging as a rising star in the DeFi space and could be the next viral sensation.

DogeBread is a meme coin that is the first Dogecoin reflection token to reward 10% of fees to holders. Any size of hold is eligible for the free Dogecoin drops. Even though it’s still a new meme coin, DogeBread was only launched on August 1st, 2021. DogeBread has already grown an extensive community thanks to a concentrated influencer marketing effort. It has over 2500 ‘diamond handed’ followers on Telegram. DogeBread reached a market capitalization of over $1 million six days after launch. It plans to add NFTs to the arsenal of goodies it has in store, and the team is working on delivering a stellar roadmap in the coming days to reveal the bigger picture of the project.

DogeBread has a 15% tax overall. 10% Doge redistribution to holders, 3% to liquidity and 2% to marketing. The DogeBread contract also features anti whale mechanisms, including 10 million token max sell/buy in a single transaction and a 30-second cooldown between transactions.

DogeBread hit an all-time high of $0.0015 within a week of its launch. Considering the value proposition for yield hunters with auto-claiming rewards and incentive structures that punish sellers and strongly reward holding, it’s not unthinkable for DOGEBREAD to hit $1.00 eventually. That would imply a market capitalization of $1 billion. In comparison, the popular meme coin Shiba Inu has a market cap of over $3 billion as of August 2021 and hit $19 billion at its all-time high in May 2021.

DeFi Tokens Poised for a ...