Ethereum is generally maintaining its bullish trend and should the current accumulation be sustained, the digital currency is billed to test more ambitious price levels in the coming weeks.

Ethereum (ETH), the world’s second-largest digital currency by market capitalization has extended its lead amongst altcoins as it inked a new All-Time High (ATH) of $4,366.09 today. While Ethereum has joined the uptrend since the beginning of the month, it has largely met with a lot of resistance in its bid to break its previous ATH record.

At the time of writing, Ethereum is changing hands at $4,216.52, up 5.1% in the past 24 hours, atop a market capitalization of $495.8 billion. This growth point has been sustained in the past month in which Ethereum has inked over 41.4%. Ethereum’s growth takes backing from many factors ranging from the increasing adoption of Decentralized Finance (DeFi) to the increasing hype surrounding Non-Fungible Tokens (NFTs).

On-chain data also shows the increasing accumulation of the digital currency by market whales. Per data from Santiment, whale wallets have bought up about 13.9% of the total Ethereum in circulation.

“#Ethereum’s top addresses have accumulated $ETH steadily since early August, and it’s no surprise to see the #2 asset approaching an #AllTimeHigh of its own. In the past 10 weeks, addresses with 1M to 10M $ETH have accumulated 13.9% more to their bags,” Santiment said in a tweet just before Ethereum attained the ATH.

In addition, the Open Interest (OI) of CME Ethereum Futures notably topped $1 billion today for the first time, further lending credence to the inherent bullish trend in the Ethereum market.

The current growth of Ethereum is a bullish factor that has sent a broad reverberation to the general market. Riding on the bullish ride of Ether, other altcoins including Binance Coin (BNB), Solana (SOL), Cardano (ADA), and XRP have also printed impressive growth runs. Solana, co-driven by its massively growing ecosystem is currently trading at $183.97, up 12.34%, Chainlink (LINK) has soared by $28.40 to 5.39%, and other top altcoins are also seeing good growth runs at the moment.

Undoubtedly, there is a likelihood of price retracement as Ethereum is currently close to its overbought position with a Relative Strength Index (RSI) of 67.98 as shown in the digital currency. 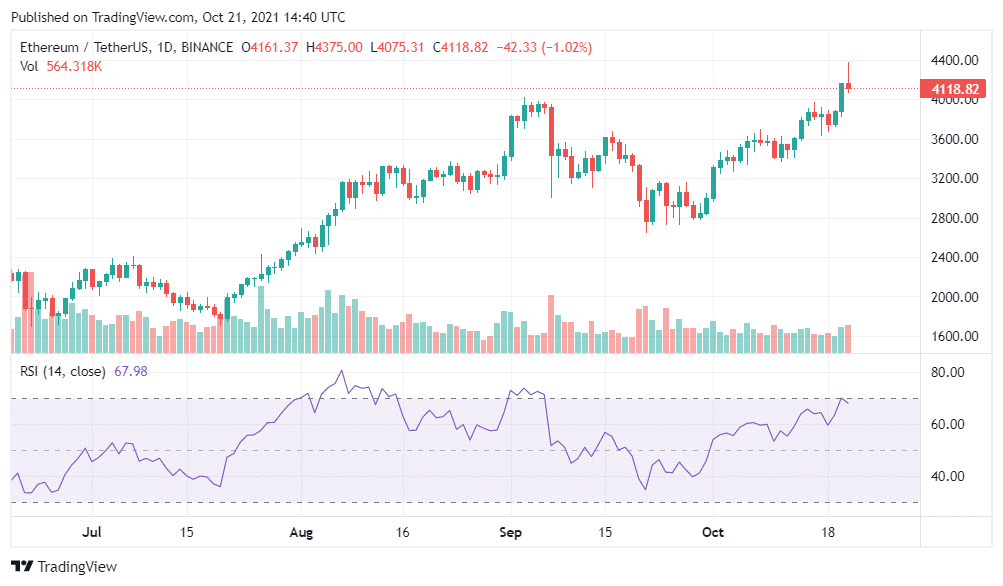 Ethereum is generally maintaining its bullish trend and should the current accumulation be sustained, the digital currency is billed to test more ambitious price heights in the coming weeks. One of the major bullish projections for Ethereum was spelled by the popular self-acclaimed crypto technical analyst, CryptoBirb who forecasts a high of $20,000 for the coin in the next 4 months.