On February 5, the Reginald Fowler’s case got an important update regarding three bank accounts in Santander UK. The assets held in them have been restrained.

The U.S. Government has issued a sealed post-indictment restraining order. In the document added to the CourtListener on February 5, 2020, there is an update regarding the case against Crypto Capital Co. functionary Reginald Fowler, presumably working for Bitfinex. It appears that Reginald had some bank accounts related to him in the UK. Because of the new document, strangely gathered no attention from the news outlets, three bank accounts will likely be seized. 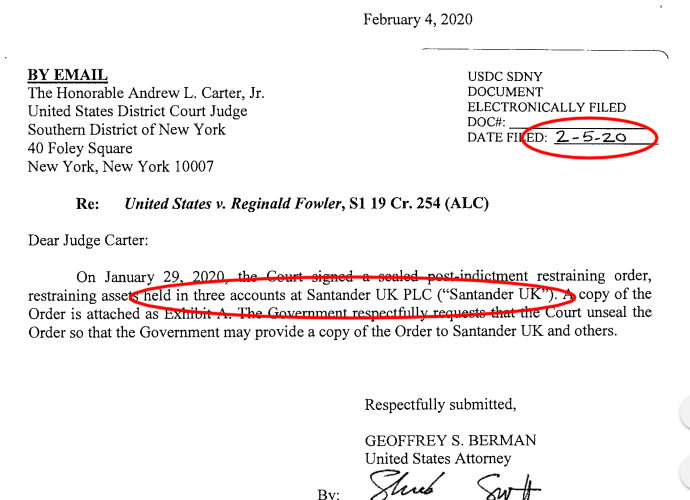 According to the document, on 29 January 2020, the court has ordered to freeze money held in the Santander UK accounts.

That money presumably belongs to Fowler, who recently declined plea deal with the court. It looks like there are motives that go far beyond what the judge can imagine regarding this deal. Fowler is accused of running a crypto-related shadow bank, but it seems like there’s a ton of shady secrets to hide.

Reginald Fowler seems to have lots of money now going to the U.S. government’s agents. The stockpile may act as evidence against Fowler, the operational manager from the U.S. He was accused of money laundering and fraud during an investigation related to Bitfinex, Crypto Capital Co. and others. Crypto Capital is a shady banking organization presumably stating behind the majority of the companies in this space.

Pick any large company, and there is a high probability it has connections with Bitfinex, Tether, iFinex, or Crypto Capital. Even your favorite crypto firm may have ties to the Crypto Capital money.

The only problem with Crypto Capital, after all the drama, is that it has the roots. Some journalists did shed light on the hidden USDT–BTC manipulations in 2017. For instance, the lawsuit by Roshe and Leibowitz refers to a scientific study made by University professor John Griffin.

It proves that Bitfinex was using Tether to manipulate prices back in 2017. Then, Bitcoin was worth almost 20,000 at the end of the year. And the transaction mempool was bloated, with fees up to $80 not working at all. Also, Polish authorities seized bank accounts belonging to Bitfinex. The bank was a wash mate for the Colombian drug cartels.

There are many other details and the New York Attorney is doing all that it takes to uncover the schemes. Bitfinex claims that they have no relation to Crypto Capital’s operations. However, they have financial transactions with them, as well as a set of broken obligations. For instance, Bitfinex gave $850 million of investors money to Crypto Capital. Then, the CC representative told Bitfinex that they lost the money. Such a situation is unbelievable in terms of traditional banking and markets.

Exchanges fake incoming volumes. Some of them conduct wash trading. OTC traders fool each other. Some of the coins going off from DarkNet markets. All this mess ends up as bitcoins in the hands of institutional investors, and your average moms and dads. Soon, there will be no way of evading the ‘dirty’ coins. Have you seen the recent wave of whale transactions? We can only make guesses where the market’s steam coming from.