HitBTC recently in a press release announced that they are lowering the exchange trading fees, presenting a new fee adjustment system. The fees have been lowered as much as 1,3%.

HitBTC which is a leading cryptocurrency exchange just announced in a press release that they are lowering the trading fees on their platform to a “market-leading lows”. By doing this, HitBTC has repositioned as one of the most beneficent places to trade crypto. The exchange has come up with a “maker-taker” fee tier system. This is a very common practice in the industry which, basically, means that the users who generate more liquidity, get rewarded.

“When a user places a buy or sell order that is outside of the existing range on the order books, they are in effect making liquidity. By doing this they are paving the road for further asset movement on the exchange, whereas, if a user completes an order that already exists on the books, they are in effect taking liquidity off the board,” reads the release.

Considering all this, HitBTC wants all of its users to receive benefits when trading with them, so they massively lowered the fees for operations under 10 BTC. Previously, the fees for makers were 0,1% and 0,2% for takers, but now these figures have been lowered to 0,07 to both. That makes it a massive rate cut, especially for takers.

Here is an explanatory image of how the tier system is going to work: 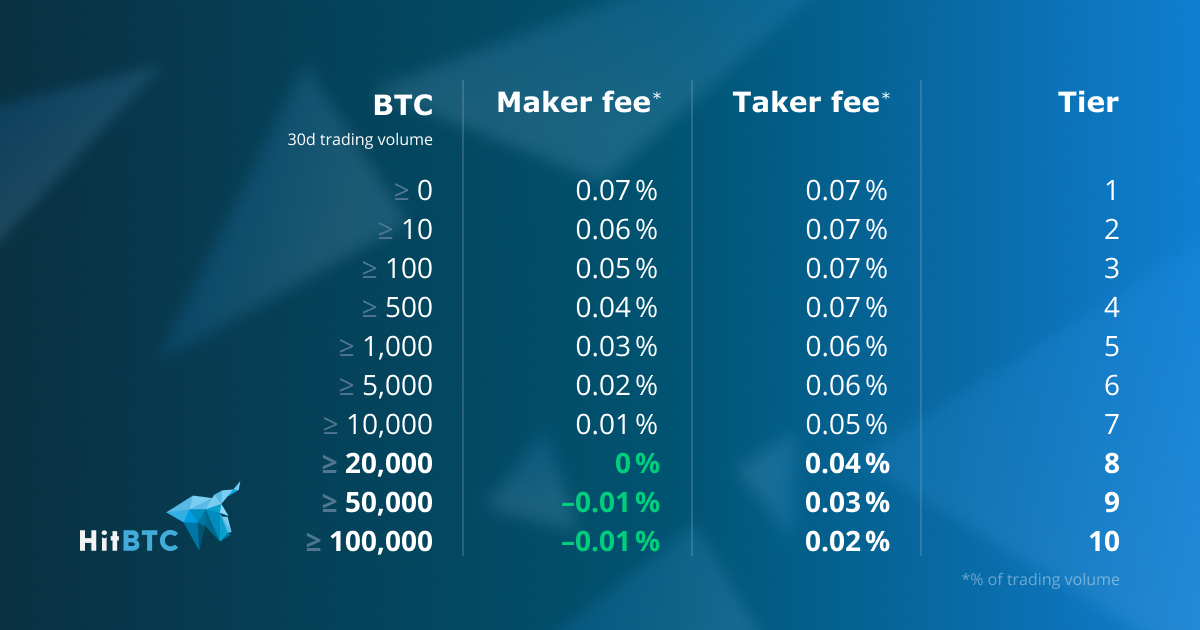 However, to be eligible to use this fee system, you have to have an account with 30 days of trading volume. That’s not 30 days of account existence, but 30 days of actual trading. Also, only upgraded accounts can apply to this tier system. As for starter and general accounts are left with the old fee system which is a fixed rate of 0,1% for Makers and 0,2% for Takers, as mentioned above. HitBTC backs it’s incentive by saying that they want to “reward community members for high volume trading.”

Janis is a cryptocurrency enthusiast and a bitcoin adherent. He has a background in video production, but for the past couple of years, he is a full-time crypto researcher and writer. He has a good understanding of multiple cryptocurrencies and loves to cover daily news. He considers himself a semi-bitcoin maximalist but always is open to any kind of new ideas that could be put on the blockchain. In his free time, he likes skateboarding and cars.

The wallet is fully compatible with HitBTC exchange. Traders with active HitBTC account can easily link it to their wallet app and use both of them simultaneously.

After successful registration with UK’s top financial regulator, PayPal is all set to offer crypto trading facilities to its UK customers.

The statement also revealed that the crypto trading platform will create a post-trade infrastructure with a network of digital asset custodians.