Cryptographer and PhD in Information Security Dr. Pavel Kravchenko shares his insights into the nature of crypto and non-crypto assets, and explains why it’s critical to understand the difference between them.

Current situation on the digital currency market is both: extremely advanced and unbelievably comical. In short, incredible demand provokes the appearance of a great abundance of cheaters. In order to bring matters to a head, let’s contemplate on one very short example.

In some time, we’ll be passing through the period when fuel cars will no longer be in fashion because new models of electric vehicles will be much more efficient, that said faster and even cheaper. E-vehicles will be the new trend to which everyone would strive. By this time, you’ll be able to find a lot of market offers, when something quite distinct from an e-vehicle is presented as nothing more than it.

An old push-bicycle introduced as a ‘Tesla-killer’ is very similar to how many ‘enthusiasts’ today try to present something which is nowhere near cryptocurrency as the very one.

So, in today’s highly speculative market, one could either make a big time or fall very short of their expectations. Whilst the failure is mostly contingent on the lack of knowledge and a number of misconceptions about the concept of cryptocurrency. Let’s consider what’s what.

The Definition of Cryptocurrency

The definition of cryptocurrency is exceptionally simple. It consists of three basic keywords.

Cryptocurrency is an independent digital currency. Independence is the main point here and is achieved by virtue of decentralization of the following processes:

Needless to say, that the initial code and specification of a cryptocurrency should be in the open source. Eventually, all the properties we have just considered can only be possible in case of a sufficiently big and open community: Even if you copy the initial code of Bitcoin, which is kind of designed for a decentralized digital currency, and launch your own — it won’t be a cryptocurrency if there won’t be a fairly big and open community around it, eventually.

As you can see, it is specifically decentralization the main attribute of every cryptocurrency. If at least one of the above-mentioned processes takes place in a centralized manner — it’s not a cryptocurrency, because it’s no more independent.

Bitcoin, Litecoin, Monero — these are good examples of cryptocurrencies, where all the above stated processes are decentralized, which makes them as much independent as possible.

Having analyzed the Ripple (XRP) currency, you’ll see that transaction validation in it is not really decentralized (only a limited number of parties can validate), while the process of emission is totally centralized because creators are in full control of how the coins are issued and distributed. So, it’s fundamentally wrong to call Ripple a cryptocurrency. But it is not good or bad, it’s just the way it is. Because Ripple aims to solve other problems.

What is a Token?

It’s important to understand that token is never a currency, while its definition is extremely vast and even abstract. So that in each particular case it can undergo certain contextual changes.

You could’ve never known, but you’ve already dealt with tokens. For example, the subway token that grants the right to using the subway service. Another example is American dollar at the gold standard times. It was a token that presumed the right to a certain amount of gold.

This term is much more narrow, so it’s easier to give it a clear and comprehensible definition.

A cryptographic token is an accounting unit that is being used to represent digital balance in a certain asset, whilst the ownership of a token is evidenced by the aid of certain cryptographic mechanisms, for example — digital signature. Bitcoin (coin) is a cryptographic token. But, it’s important to understand that …

Once again, the cryptographic token represents a unit in certain digital accounting system. Meaning that tokens can not only represent some digital independent currency like Bitcoin but also be backed by something physical or digital:

For example, agribusiness company can tokenize its grain receipts, so that seeds are situated in the warehouse, while the tokens are being easily traded.

Most commonly, the accounting of cryptographic tokens is realized with the aid of the blockchain technology, while the access to them is carried out through special e-wallets that use the digital signature schemes.

Now, Let’s Have Our Knowledge Structured

The last thing we’re going to do is puzzle out this, at first sight, complicated scheme. In reality, it’s a piece of cake. 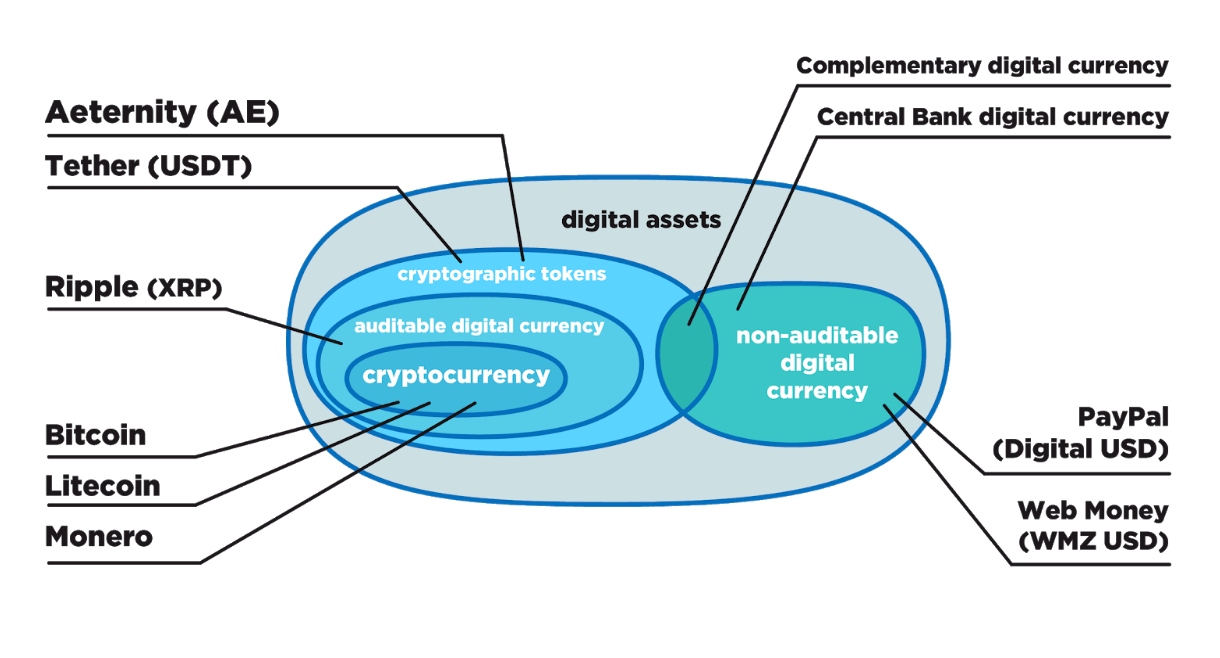 As you can, see it’s all about digital assets. Let’s first define the right side of the picture:

Sometimes people find it hard to distinguish what is cryptocurrency and what’s not. We aimed to show that it’s not that difficult when you have your main focus on the criteria of independence and decentralization. Because it is specifically they that define the true freedom of the currency and of those who own it; they that triggered a tiny (or maybe even not) revolution of the accounting systems; revolution in people’s minds.

P.S. At the same time, it’s important to be objective and understand that cryptocurrencies are only the part of the game, because there’s the blockchain technology that is applicable for both: open (public) and private (corporate) systems. The workability field is so broad that triggers a vast flow of thoughts that we usually love to share on our blog.

Dr. Pavel Kravchenko is the founder of Distributed Lab, blogger, cryptographer and PhD in Information Security. Pavel is working in blockchain industry since early 2014 (Stellar). Pavel's expertise is mostly focused on cryptography, security & technological risks, tokenization. He considers the company's mission in a creation of an open ecosystem that uses uniform payment and asset management protocol - so-called ”financial web'’

Investors pulled out billions of dollars in value from the Tether circulatory supply after regulators raised red flags around stablecoins.

The growing popularity of cryptocurrencies has continued to attract a lot of prominent fintech firms with PayPal coming off as one of the many.