Binance, Block.one, BitMEX, BiBox, KayDex, BProtocol, Status and TRON Foundation received the class-action lawsuits. The lawsuits claim that those companies were selling or helping with the selling of unregistered securities.

Binance, Block.one, BitMEX, TRON Foundation, BiBox and others received an astral hit. Well, not quite astral, but rather juridical. Because the regulators are mad when someone is doing things wrong.

All the lawsuits are filed to the Southern District of New York. Per the documents, the exchanges were selling the crypto tokens via the so-called IEO and ICO models. The lawsuits claim that KuCoin, Block.one, Quantstamp, Civic, and Binance were issuing and selling the ICO tokens. As for the BitMEX exchange, the documents claim they have participated in the selling of unregistered securities.

The SEC claims that tokens in the list are unregistered securities. Here’s what the lawsuit against Binance states:

“Within the last year, the SEC has clarified, with the benefit of labor-intensive research and investigations, that the Tokens were securities.”

The lawsuit indicates that most of the ICO offers can pass the Howey Test. This test determines whether an asset is a security. Many of the exchanges who sold unregistered tokens still don’t possess the broker-dealer license in the U.S. You could perform an ICO and vanish away with investments in 2017. But not in 2019.

It’s the same law firm standing behind the recent lawsuits against Bitfinex and Tether. The Roche Friedman firm named eleven companies like the ones responsible for illegal token issuance. They also attached several notable crypto personas to the case. Those include Changpeng Zhao, CEO Binance, Vinny Lingham, CEO Civic, as well as Brendan Blumer and Dan Larimer from Block.one/EOS. 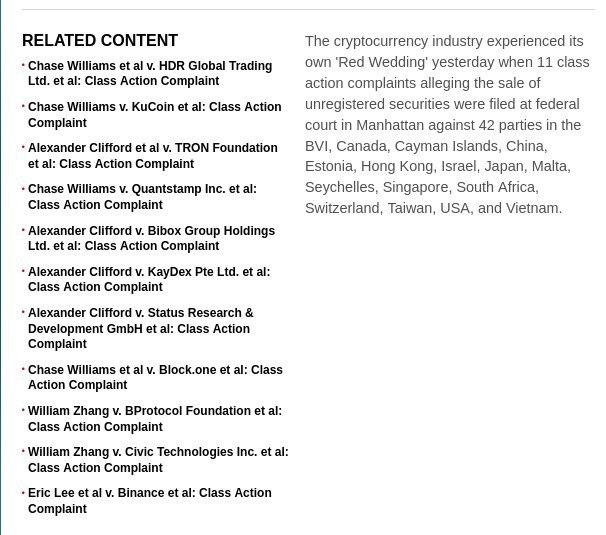 Roche Freedman is the top-level lawyer firm with a specialization in the blockchain. They have participated in cases against Craig Wright and Bitfinex. However, this time the lawsuit features new plaintiffs. Those are Chase Williams, Alexander Clifford, and Eric Lee. Plaintiffs have been investing in tokens like ELF, CVC, TRX, TOMO, SNT, and others. They used the named platforms.

It looks like we are witnessing the beginning of the new era of crypto exchange regulation. Because, no matter what will happen with the lawsuits, the state regulators will be following these cases. Imagine the court can find that KuCoin, Binance, and others were selling the unregistered securities. It will only increase the number of possible troubles. And certainly, a number of crypto observers were claiming such things would happen.

Look at the allegations made against Justin Sun‘s TRON Foundation:

“The creation of TRX tokens thus occurred through a centralized process, in contrast to Bitcoin and Ethereum. This, however, would not have been apparent at issuance to a reasonable investor. Rather, it was only after the passage of time and disclosure of additional information about the issuer’s intent, the process of management, and success in allowing decentralization to arise that a reasonable purchaser could know that he or she had acquired security. Purchasers were thereby misled into believing that TRX was something other than security when it was a security.”

Similar allegations made against Binance, as they have several agreements with the token issuers. Those issuers didn’t register their tokens as securities. They also made agreements with exchanges in violation of Section 5 of the Exchange Act.

The latest development comes after the world’s largest cryptocurrency exchange secured preliminary approval from the Astana Financial Services Authority back in August.

The SEC has filed a complaint with a Texas court regarding the alleged facilitators of a crypto Ponzi scheme.