Despite statistics indicate that the Lightning Network has shown quite satisfactory performance, some sectors of the cryptocurrency community are not as happy as others with what has been achieved so far.

It was December 2017, the Bitcoin was at almost 20k US dollars and I had just made my first transfer of 100k satoshis to a friend. The satoshis were supposed to arrive in minutes; however, it arrived in 2 days.

The disappointment was huge. It was the first operation that me and my friend handled with Bitcoin and we did not understand what happened. The magic did not occur as expected.

In those 2 days we were like crazy complaining with the virtual wallet and they told us that it was possible that the Bitcoin blockchain could be saturated. That blew our minds because we thought it was prepared for that, but it was not.

Days after the confirmation of the transaction, when the Bitcoin’s price started to dive, I could really understand what was going on: Bitcoin’s blockchain wasn’t prepared for such a huge demand of transactions at that moment, so it naturally created a queue that I felt that last forever.

At that time (December 2017), Bitcoin was in everyone’s mouth and more and more people wanted to enter the system but the Bitcoin blockchain did not want them.

But let’s explain it better starting with the definition of Bitcoin’s blockchain.

Whats Is Bitcoin’s Blockchain and How Does It Work?

The blockchain is a shared public accounting on which the entire Bitcoin network is based. All confirmed transactions are included in the blockchain. In this way, Bitcoin wallets can calculate your expendable balance and new transactions can be verified, ensuring that the payment is being made to the person making the payment. The integrity and chronological order of the blockchain are enforced with cryptography.

Here’s a video that can help you understand it better:

Bitcoin’s blockchain has a very important limitation: it only works 4-6 blocks per second. In simpler words: It only can manage between 4 to 6 transactions every second.

To give you an example of the capacity that Bitcoin should have to really cover the demand that it has, Visa’s worldwide network has a maximum of 56k transactions per second.

Yes, at that time it was the cryptocurrency bottleneck and therefore the entire industry, until Joseph Poon and Thaddeus Dryja published the Lightning white paper in January 14th 2016 and saved Bitcoin from being displaced as an alternative for payments.

What Is Lightning Network About?

Lightning is a specific payment protocol that allows fast transactions between people (nodes) that are part of the network (blockchain) that use Bitcoin. And when I say fast I mean seconds or in the worst scenario few minutes.

Here you can see this detailed video to make it more clear:

Well, the white paper of Lightning Network was published in 2016, tests were done in December 2017 and until it was officially launched from March 2018, so then what?

It’s important to mention that a number of altcoins such as GroestlCoin, Syscoin, Vertcoin and Litecoin now support the Lightning Network scaling protocol in their blockchains. 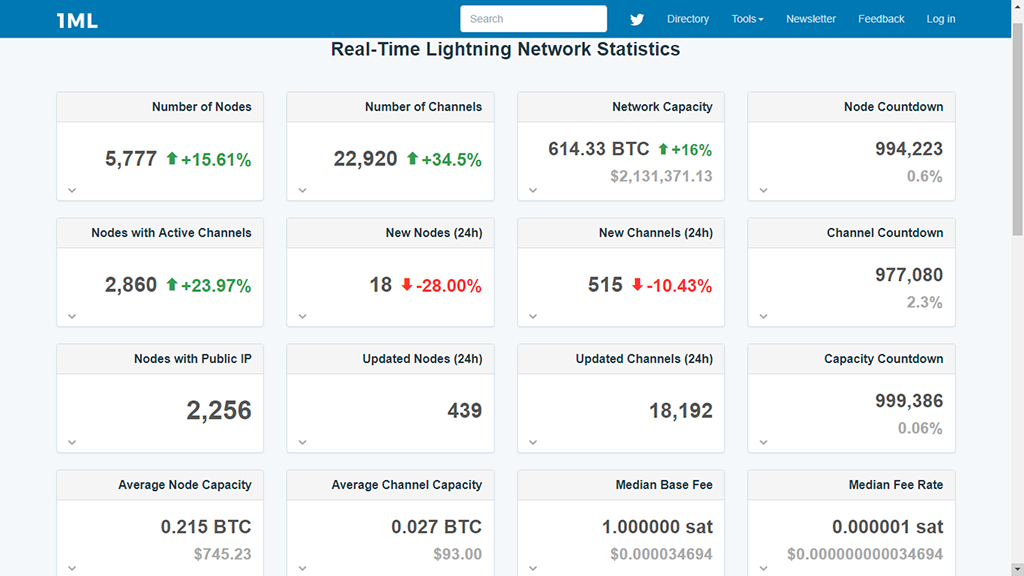 Now a year later, statistics indicate that the scaling solution for the Bitcoin network called Lightning Network has shown quite satisfactory performance. However, there are discrepancies between some sectors of the cryptocurrency community, which are not as happy as others with what has been achieved so far.

Depending on who you ask, Lightning Network is a resounding success or failure that threatens to destroy Bitcoin’s own fabric. In the cryptocurrency community, there are divided opinions regarding the effectiveness of the scaling solution. The positions range from that the improvement achieved by Lightning Network is impressive until now the network is centralized and controlled by banks.

But if really lightning were used by many people, it would have an immediate and sustainable effect on Bitcoin’s price, which currently has no such impact.

On the other hand, seeing the behavior of people when they are interested in something new like Bitcoin and even newer like lightning technology, people (in a massive way) will never be interested in lightning if Bitcoin’s price does not rise steadily before. It’s that simple.

People who are already within the crypto world may be interested in lightning but the global effect will be very little.

Here I leave only 2 statistics about it that proves what I said:

Here is a video to have a better look at this stats:

Victor Delgado is an industrial engineer with 7 years of professional experience. He has always liked technology issues a lot and since he discovered bitcoin and all related topics, his curiosity has aroused like never before. He considers himself as a very responsible person, he likes to discover things and learn something new every day.