A breakout of Bitcoin price above $7,400 renewed interest in the largest cryptocurrency even as the holiday mood began.

The weekend was positive for Bitcoin with another batch mimicking up during late U.S. trading and early Monday morning in Asia.

BTC/USD is currently trading at $7,521 (+ 5.4% on the daily chart). The coin has been recovering since Sunday. During the early Asian hours, the cryptocurrency attempted the area above $7,600.

Sentiment among traders and analysts altered back up again as optimism for “a year-end rally” returned to cryptocurrencies.

Analysts maintained their range during the sudden Bitcoin correction from $6,500 to levels close to $7,500 last week.

Majority doubt that the reversal was fundamentally supported and believe that Bitcoin did not go through with exploring the downside. Moreover, some still say that BTC could plunge to $6000 or even $5,500 before a major reversal occurs.

However, the weekend action where Bitcoin spiked past the $7,400 and $7,600 hurdles, is changing negative views to positive sentiments. A breakout to $8,000 is possible before the new year. Although, Bitcoin may need to sustain the support at $7,500, and maintain large volumes and anchor on $8,000.

Bitcoin remains stationary in its limited-range channel which formed nearly a month ago and until $8,000 is broken this rally is expected to proceed.

Crypto traders and analysts are beginning to turn bullish with support holding steady and retesting the resistance. The last few days of this year will be decisive for the next direction. All that bitcoin needs is to stay above $7,000 and maintain support for the position to gain momentum.

2020 is seen as an answer to the question of whether there will be a halving. This occurrence, which is 147 days from now, may either lead to a rally in May 2020 or lead the BTC overall to a higher high. The current rise in the bitcoin price may be an indication of a halving, as 2020 is now considered a positive year for standardization of cryptocurrencies, although no new highs are ever confirmed. 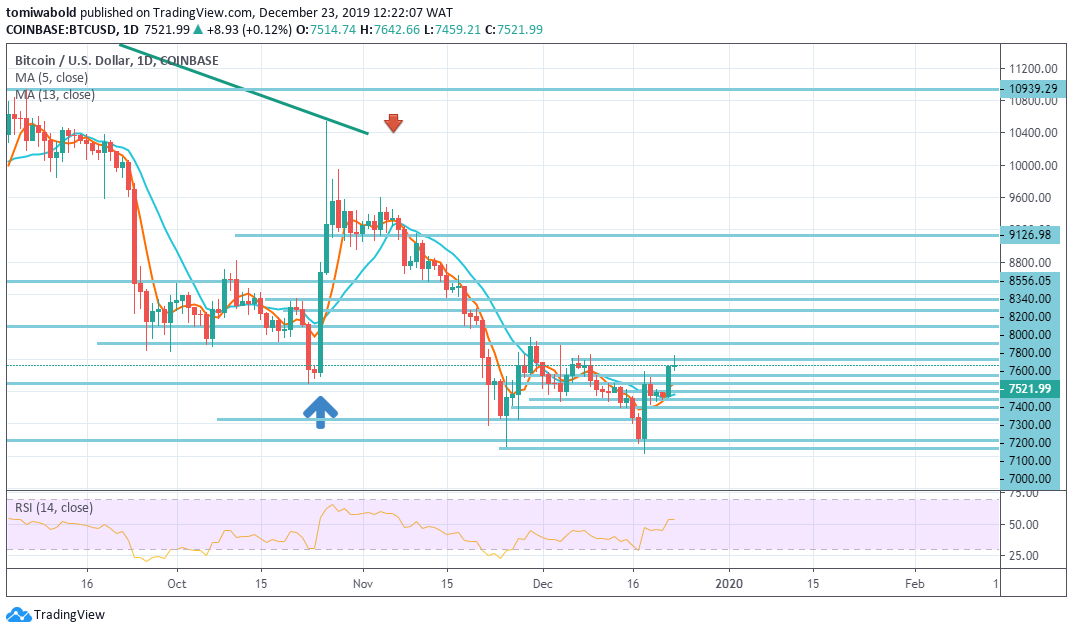 Bitcoin corrected higher over the weekend along with other major cryptocurrencies. After a notable rebound from the price level at $6,500 last week to the highest level at $7,500, BTC held together between a narrow range from the level at $7000 to $7,300. The breakout pushed the price to break through the major barriers at the level of $7,200, $7,400 in addition to $7,600. However, the $7800 price level remains intact and unrestricted although it has been largely tested.

BTC is trending past important resistances that changed into support levels. More movement towards the price level at $8,000 may touch the level at $7,800. A breakout above $7,400 renewed interest in the largest cryptocurrency even as the holiday mood began.

On the downside, Bitcoin is strongly supported after the major resistance has turned into critical support levels. The first support is noticed at the $7,400 level, as shown by the horizontal support level on the daily chart.