On March 19th, P2E encrypted game Pikaster announced that it has received strategic investment from KuCoin Ventures. The two parties will carry out in-depth cooperation in the fields of technology and business to jointly promote the development of the blockchain financial ecosystem. It is reported that KuCoin Ventures is an excellent investment institution under KuCoin focusing on blockchain and distributed technology, and has been a major contributor to many leading blockchain projects, with the aim of promoting the advancement of blockchain technology through capital.

Under the strong offensive of DeFi and NFT, the market has ushered in a frenzy that belongs to GameFi. According to Blockchaingamer.biz statistics, GameFi-related projects will raise a total of more than 1.8 billion US dollars in 2021. Up to now, the total number of users in the GameFi field has exceeded 1.2 million, and the total lock-up volume has reached the highest level of 509.1 million US dollars. The hot GameFi is still profitable.

With the overall activity of the global game industry, the emerging encrypted game Pikaster is showing its vitality. It uses a 100% decentralized architecture to balance the ratio of playability and financiality, and forms a complete closed loop with convenient operation, stable currency system, and diverse gameplay to establish a door for more enthusiasts to easily enter GameFi. At the same time, it gives market participants a chance to play a fair game. When the continuity of user income is guaranteed, Pikaster, which has been invested in for a long time, will also remain prosperous, and eventually the entire chain game economy industry will develop soundly.

Pikaster is Metaland’s first Polygon chain based card GameFi game. It covers DeFi, NFT, games, Metaverse, DAO/Social and other elements, and is highly scalable and interoperable. On the basis of the “draw card” gameplay, this game additionally adds NFT pet training, NFT equipment enhancement skills, pledge NFT to obtain income, etc. The introduced PK battle mode allows players to buy their own NFT (Piaksters) to participate in battles and complete tasks to gain Get multi-token rewards.

Pikaster has set up a trading market, a rental market and a blind auction market in the game system. The pyramid-shaped structure allows players to choose whether to conduct free trading, idle rental or auction according to their actual needs and economic level to maximize the acquisition of NFT. At the same time, the community-driven Metaland gives players governance and voting rights for platform development. Users who hold platform tokens can participate in community building and share the huge dividends of the community.

When the fusion of financial attributes and interesting attributes becomes a mainstream trend, Pikaster will bring considerable imagination to blockchain games and even the blockchain world.

Pikaster is a pet card game. The gameplay is very simple. Players can obtain random pet cards by purchasing their own NFTs (Piaksters) in the trading market. The cards have 6 different attributes, namely: grass type, poisonous insect type, Water, electricity, fire, fighting, the combat performance can be predicted according to the restraint relationship between different attributes. Players can obtain upgraded pet card characters through evolution and breeding, and use appropriate card battle strategies or flexible pledge system, get multi-token benefits. This digital asset is an encrypted asset with confirmed rights on the Polygon chain, which is converted into actual income after being sold through the trading platform.

Next, Pikaster will open IGOs of top exchanges and IDOs of MLS tokens in April this year. After the end, it is expected to officially launch the market in mid-April. The strong R&D team supports the platform to continuously output new games in a half-year cycle to help expand Multi-scenario application circulation of player NFT and tokens. More roadmaps below: 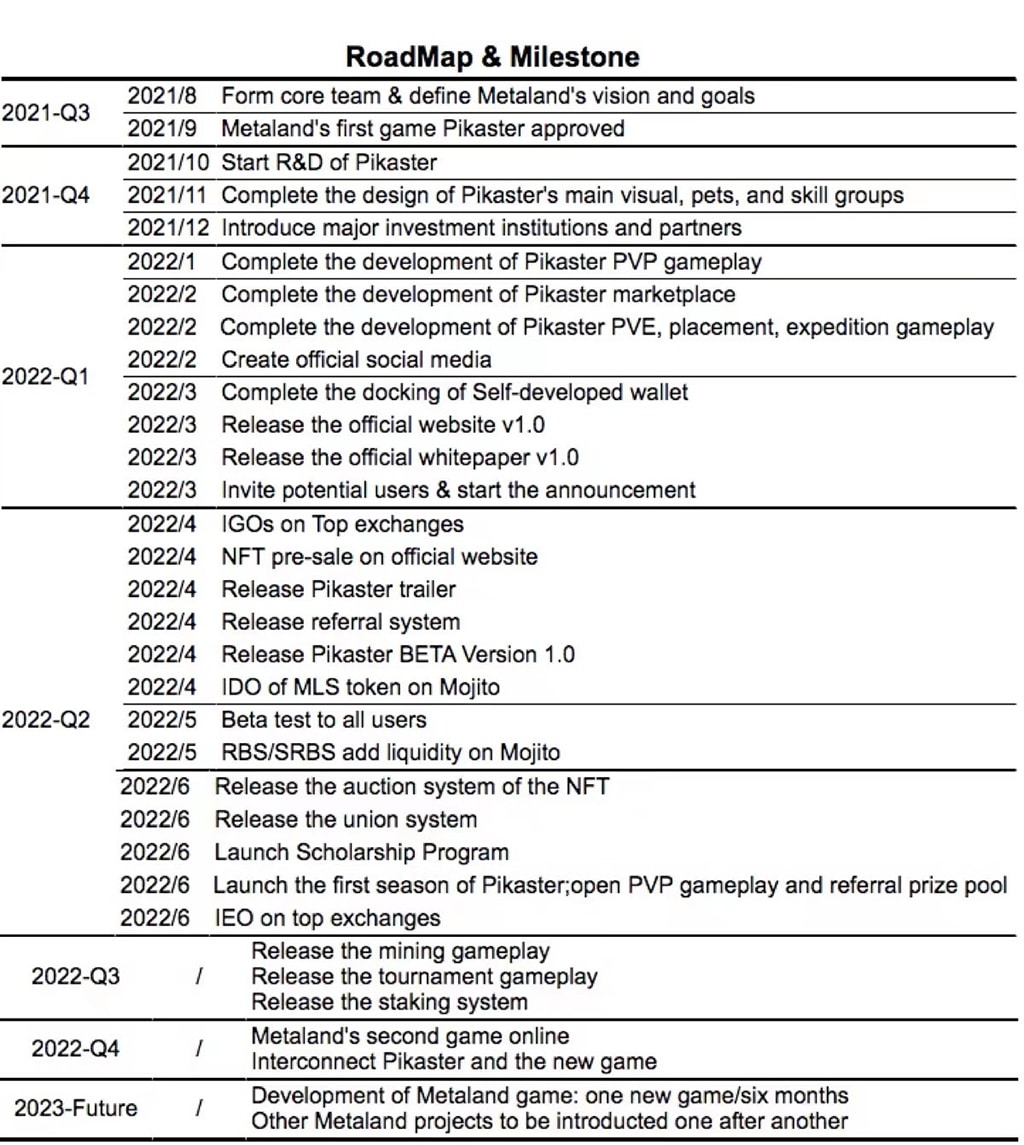 We are in a period of rapid development of the metaverse, and Pikaster’s courage to experiment with more complex visual effects, virtual world construction, user-initiated creation, social models, etc., will bring innovation opportunities to the industry.

In the future, Pikaster will continue to put users first, rely on ecology, and further expand into RPG, development, management and other fields, and use the advanced experience of Truly-play Truly-earn to meet the high needs of users.