It may be the beginning of the end for CoinDesk’s foray into indexing as a whole new ballgame is being served up to the web’s number one bitcoin publication.

Since the beginning of post-$1000 bitcoin there have been two aspects to bitcoin that have become almost as inseparable from the virtual currency unit as the block chain:

The first of these is the CoinDesk Bitcoin Price Index (BPI), up until now a widely referenced value for the digital currency based on the prices set by four exchanges, those being Bitstamp, BTC-e, LakeBTC and Bitfinex. The second is the dependence of BPI-priced bitcoin on the value of two underlying synthetically pegged FIAT currencies whose value is set more or less entirely by the American Federal Reserve Bank’s interest rate policy.

CoinDesk’s BPI makes the assumption that one half of the world quotes BTC in USD and the other quotes it in CNY. It also assumes that everyone uses one of its four constitutent exchanges – one of which has anonymous founders who refuse to reveal their new identity – to trade.

Partly as a result of the disconnect, as well as the BPI’s lack of differential value proposition for BTC from standard USD and CNY transactions, bitcoin’s value has collapsed during 2014.

Nevertheless, CoinDesk’s BPI has become pervasive enough at least to earn its owners a constant mention in the pages of publications usually reserved for only the loftiest of financial topics, such as the Wall Street Journal and Financial Times.

Well then, consider this article the obituary to CoinDesk’s brief-lived foray into providing indexing and digital currency financial data services to the bitcoin community, because the hands-down winners just arrived on the scene. Theirs is a vastly more robust bitcoin index than anything at CoinDesk.

Bitcoin Gets A Brave New Index

BraveNewCoin is a venture founded and completely self-funded – at no small expense – by Croatian-born New Zealand-based CEO Fran Strajnar, a veritable Richard Branson of the tech era who serves as part of a senior management committee team comprising two other tech professionals whose accolades include, among other notable achievements in tech history, being on the first development team for Apple’s hit Macintosh computer back in the 1980’s.

Strajnar, as with many financial professionals who have gravitated to bitcoin, has always been frustrated by the limitation of CoinDesk’s simplistic approach to compiling bitcoin price data.

Impatient when challenged to offer a real-life example of his frustration, Strajnar points out that in yesterday’s trading (October 27, 2014) CoinDesk BPI represented less than three quarters (74.06%) of all USD trading volumes in its index price. Further, on that date, USD trading comprised just 10.76% of all trading volumes. According to those metrics, CoinDesk’s BPI represents at most a puny 7% of the global bitcoin market.

That, Strajnar maintains, is a margin of omission too large for any serious provider of financial data to live with.

Indeed, it’s hard not to agree: on Wall Street, if an index provider was portending to a market that under a tenth of the total trading activity were in any way meaningfully representative of the overall price of the asset class being represented, there would be swift lawsuits against the firm in question for professional negligence.

It was this frustration with the gap in professional standards elicited by bitcoin and altcoin data and news providers that principally drove Strajnar to create BraveNewCoin’s efficient, user-friendly index price which flashes in real-time updates at the top of the site 24/7 just like any other index does while concealing the awesome mechanics behind its functionality.

Instead of giving up at four exchanges and two currency pairs, to empower the performance of the BNC index, Strajnar and his team spent a year compiling data for 50 exchanges and 28 FIAT currency pairs that calibrate BNC’s Index value while repetitively reviewing the data for signs of stray baggage that needs consistent weeding out.

As if to make the point clear that his efforts are starting to bear fruit, Strajnar points to a series of incidents in the late Asian evening this week when CoinDesk’s BPI has jumped around erratically, creating mass-confusion, as a result of its more limited calibration and overall lack of sophistication technologically speaking . 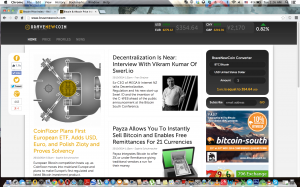 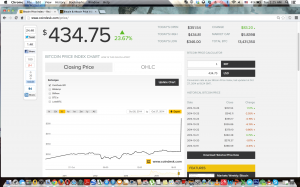 Sunday, a situation on LakeBTC where the exchange maintains that old data trapped in the live order book gave its servers a $1000 price, temporarily upset CoinDesk’s BPI so suddenly, the number one bitcoin publication by monthly unique visitors was spitting out the wrong bitcoin price, off by some 25% or so in value.

Inexplicably, the same thing then happened on Monday in the Asian evening, too. CoinSpeaker contacted LakeBTC for comment about whether it has been having further problems, but the exchange maintained that since Sunday, everything has been running smoothly. Its doubly-troubling then that CoinDesk’s BPI should have spiked again so erratically, as this time there is no explanation for the event.

If you ask Strajnar, this sort of anomaly is simply because the global bitcoin market has become significantly more complex in terms of its core trading dynamic. A much more complex algorithm is required to filter the wheat from the chaff and handle that pricing process for investors, says Strajnar.

“Our index didn’t budge [on either occasion] when CoinDesk’s did because we have layers upon layers of algorithm that scrub for bad data,” explains Strajnar. “We’re encountering bad data so many times due to some of the crappy exchange APIs, that we now know the behavior to look for.”

“And then sometimes the wild data is correct – some idiot does buy 10 bitcoins for a thousand bucks [when the price is only half at market]. In this case we would encorporate this trade, but so many data points in our index calibration means we get no misleading graph spikes like the ones on CoinDesk that are starting to appear.”

As if to drive the point home, Strajnar points out that during the CoinDesk BPI’s price discrepancies over the last couple days, BNC’s bitcoin index held firm (see pictures above).

“[Because] you settle to a particular index price [in the case of leveraged products], that’s why Tera Exchange created their own index and the CFTC has to approve it, and all exchanges included in that index need to share info with them – it’s to fight market manipulation [that disrupts leveraged trading],” a LakeBTC spokesperson said in an interview over Skype.

Now however, Strajnar notes that initiatives such as those of Tera will be much simpler due to the fundamentally clean data that BNC is spewing out for free to bitcoin’s trading community. “We haven’t even released half of the technology we are going to make available to everyone yet,” Strajnar, 28, promises mischievously.

Asked about whether he would consider selling or licensing out to CoinDesk or to owner Shakil Khan’s tech and media franchise if a representative came knocking with an offer, Strajnar won’t go on record to disparage his competition. BNCs Index, after all, already speaks for itself.

Update: Since going to press, LakeBTC has admitted responsibility for the second price discrepancy that roiled the index. As a result, CoinDesk has dropped LakeBTC from its indexing catalog for 30 days pending review. This leaves CoinDesk BPI tracking 3 index components now: BTC-e, Bitstamp and Bitfinex.

Editor’s Note: CoinSpeaker does not calibrate its own index nor does it have plans to due to the technical complexity of such an endeavor. Thus before now we have used CoinDesk’s BPI as a measure of bitcoin’s value when compiling our reports. Having been given a full demonstration of the technology that BNC employs, we will henceforth cease to use CoinDesk’s index as a price metric for the digital currency, and will from now on reference only BNC’s index, which is by far the most powerful and sophisticated any of us here have ever seen in action.