Greg Waisman, the co-founder and COO of the fintech company Mercuryo, shares his insights about the Bitcoin (BTC) and Ethereum (ETH) weekly price movements.

Bitcoin price has stabilized as the weekend arrived, although this period of calm is likely not going to last. Based on some recent news reports, BTC might soon go sky-high once more. At the same time as BTC is trading sideways, Ethereum seems to be taking on the stage, as the coin tried to breach one of its more troublesome resistances.

Bitcoin Gets Its First ETF in Latin America – Is the US Next?

Bitcoin ETF has been something that the crypto world has been looking forward to for years now. While some countries have already launched several, such as Canada, which recently got three of them – the US SEC still has concerns and refuses to approve any proposal coming its way. However, there is no doubt that institutional investors are interested in Bitcoin, and the SEC cannot deny this any longer.

Recently, VanEck took another shot at getting the regulatory approval to launch BTC ETF, and soon after that, the CBOE sought approval to host it. While the SEC has not yet agreed to anything, this might just be enough to give that game-changing nod that would see the launch of the first BTC ETF in the United States. Not to mention the fact that the pressure to do so has risen even higher after Brazil got its first Bitcoin ETF only days ago, making it the very first one in Latin America.

The fact that institutional interest is surging rapidly was also reported by JPMorgan, which recently announced that institutional and retail BTC flows balanced out in Q1 of this year. Meanwhile, an analyst from Deutsche Bank stated that Bitcoin is too important to ignore.

Another hint at this is the fact that Atlanta-based Bitcoin ATM provider launched more than 110 new ATMs in 24 different US states. Since Bitcoin ATMs only appear there where there is great need for them, this indicates that there is a growing demand for the machines in the US. Even Ben Shapiro, a prominent American conservative political pundit recently endorsed BTC, presenting it to his audience of 2.87 million subscribers. This is a massive thing for cryptocurrency, especially since he explained it in simple terms that anyone could understand. Furthermore, Shapiro is not a billionaire public figure like Elon Musk – he is considered to be ‘a man of the people’, with a great following among the conservative, republican, working-class Americans.

Meanwhile, there was some interesting news regarding Ethereum, as well. For example, a Messari analyst said that Ethereum actually has a chance at overtaking Bitcoin after Ethereum 2.0 comes. The analyst, Ryan Watkins, said that Bitcoin has been dominating over ETH because it has a predictable monetary policy and a secure blockchain. When ETH transitions to PoS, it may become more secure and more predictable than BTC, which could bring it to the leading spot.

Ethereum has also seen a real NFT-related token price soar, as everyone seems to be getting into NFTs as of late. Even Elon Musk announced he is selling an NFT song as an NFT, although he backed out of it at the last moment.

Bitcoin Price Stabilizes while Ethereum Tries to Go Up

Over the past seven days, Bitcoin price managed to reach $61k, and then crash to $54k  After this, it spent several days trying to rise, but it was unable to break a resistance at $56.5k, until late March 17th, when it suddenly skyrocketed to $58k, and after a short correction, to $59.9k, nearly hitting that $60k mark for the second time in a week.

Unfortunately, the price got rejected again and the coin dropped back to $57,000, only to once again bounce back up and stabilize at $59,000. 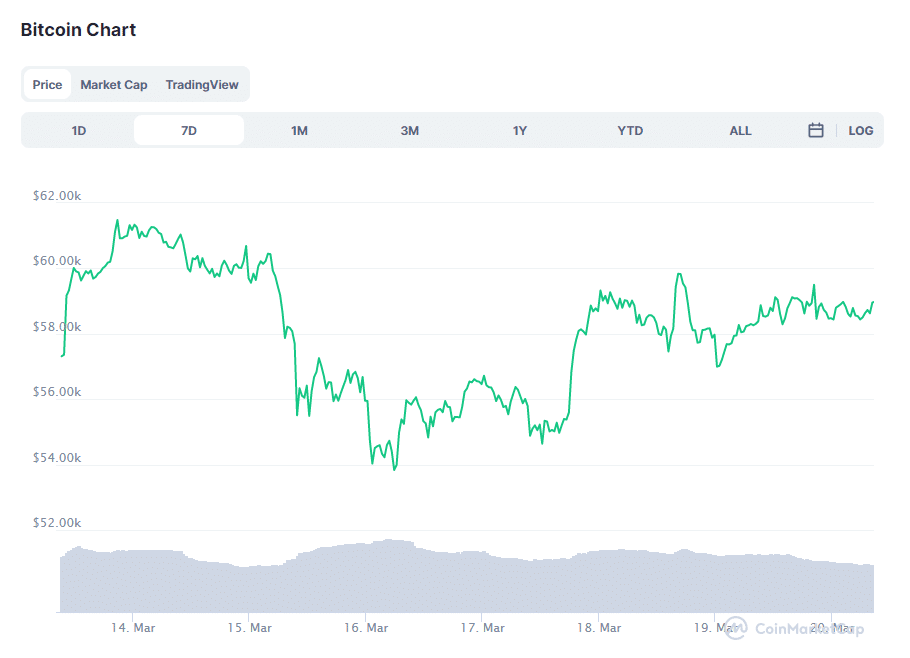 Ethereum’s chart looks fairly similar, as the coin crashed from $1930 last Sunday, eventually hitting a new bottom at $1735. After that, it attempted to go back up but was held down by the resistance at $1800. Like Bitcoin, it managed to breach the roadblock late on March 17th and nearly climb back up to $1850. In fact, it attempted to do so four times, between March 17th and Saturday, with the last one finally allowing it to touch this mark. 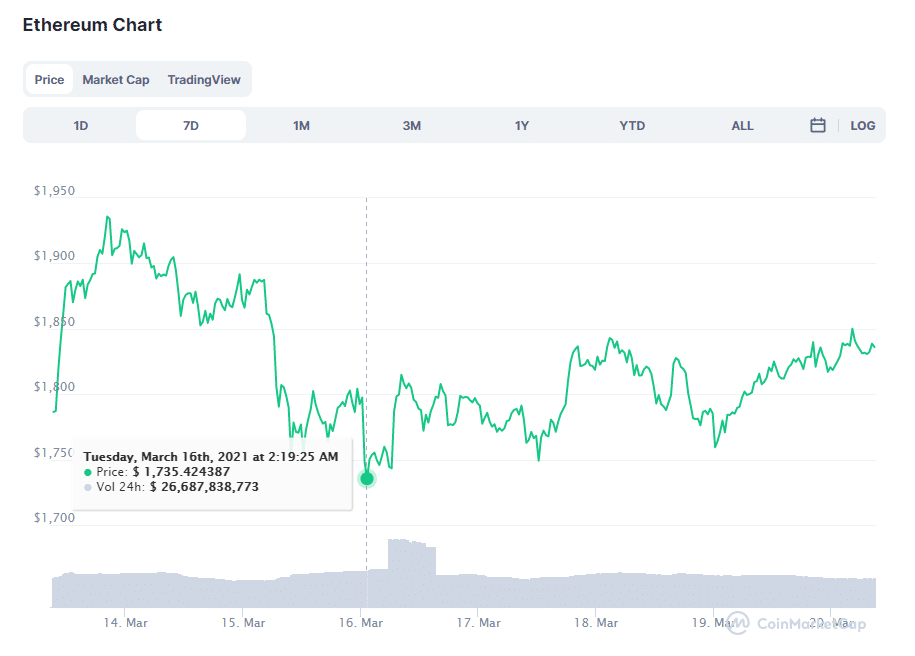 With all that has been going on, it is very likely that both BTC and ETH will see a significant price increase in the near future. The hype regarding Ethereum 2.0 and the NFT and DeFi sectors will help the coin attract new investors and users, while Bitcoin’s new ETF in Brazil is likely to attract Latin American institutions. And, if the US SEC finally does give green light to VanEck, BTC will likely skyrocket past $60k without even slowing down.

The major excitement around “Shanghai” is that this hardfork will allow investors to withdraw their ETH staked with validators.