It is believed to be a correlation between USDT’s market cap and Bitcoin’s price movements. The majority of investors expect a rise in Bitcoin price after a significant boost of Tether (USDT). What can traders do while waiting for the bull?

Years later, when we looked back to 2020, we might call it “The Year of Cryptocurrency”, for we get to not only experience the third halving of Bitcoin but also witness an unprecedented surge of stablecoin supply since March. Up to May 3, the total market cap of six major stablecoins reached $8.7 billion, among which Tether (USDT) made up most of the total, amounting to $7.52 billion.

As indicated by the data of Coincodex.com, the total market cap in March was just $5 billion (it had stayed at $5 million for 8 months), then it surged to $8.7 billion within two months. Such a significant boost naturally aroused heated debates about the cryptocurrency market and a majority of investors believe the boost of stablecoins’ supply suggests a Bitcoin binge. 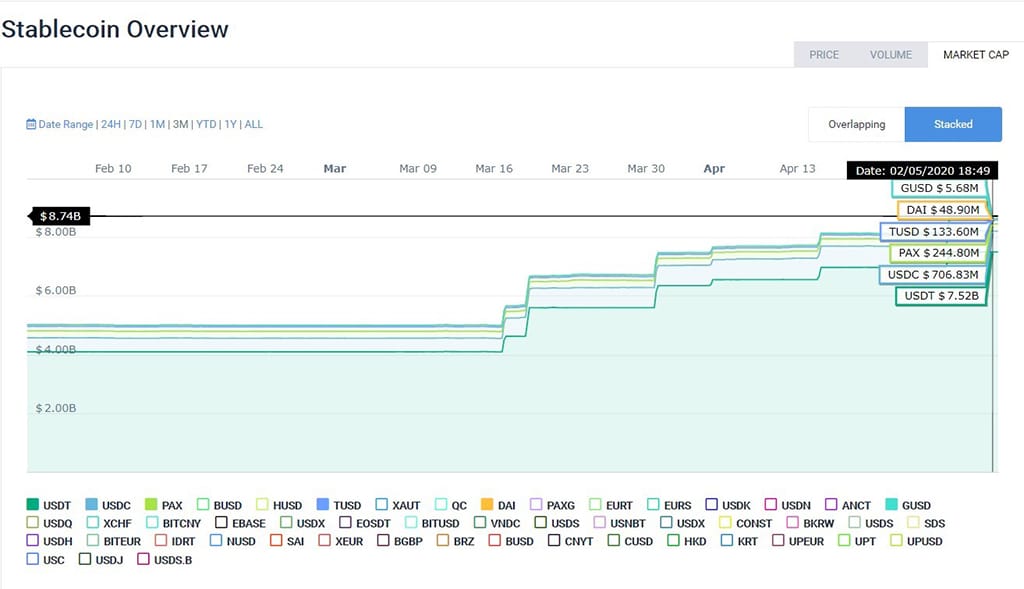 Stablecoins are widely used as a de facto form of cash in the cryptocurrency market. Since their market value is pegged to some external reference, they are more “stable” in price compared with Bitcoin. Comparing with fiat money, they have the advantages of blockchain digital assets in instantaneous money movement and easier payments, which enable traders to easily convert their stablecoins into fiat money or other cryptocurrencies. Besides, in some countries such as China and Russia where Bitcoin is banned from banking transactions, traders tend to exchange their fiat into stablecoins, hold them, and buy other cryptocurrencies when the right time comes.

Over the past few years, there seems to be a correlation between USDT’s market cap and Bitcoin’s price movements. One side of USDT’s Bitcoin buying power is that when the price of Bitcoin goes up, the same amount of Bitcoin requires traders to pay more, so more fiat money would need to flow into the market, thus driving the supply of USDT up. In turn, the increased supply of USDT could indicate a rise in Bitcoin’ price.

The Market is Preparing For a Bitcoin Peak

Before March 18, the total volume of USDT was just at around $4.11 billion. Within two months, Tether minted $3.41 billion USDT, almost doubling the market cap of USDT. 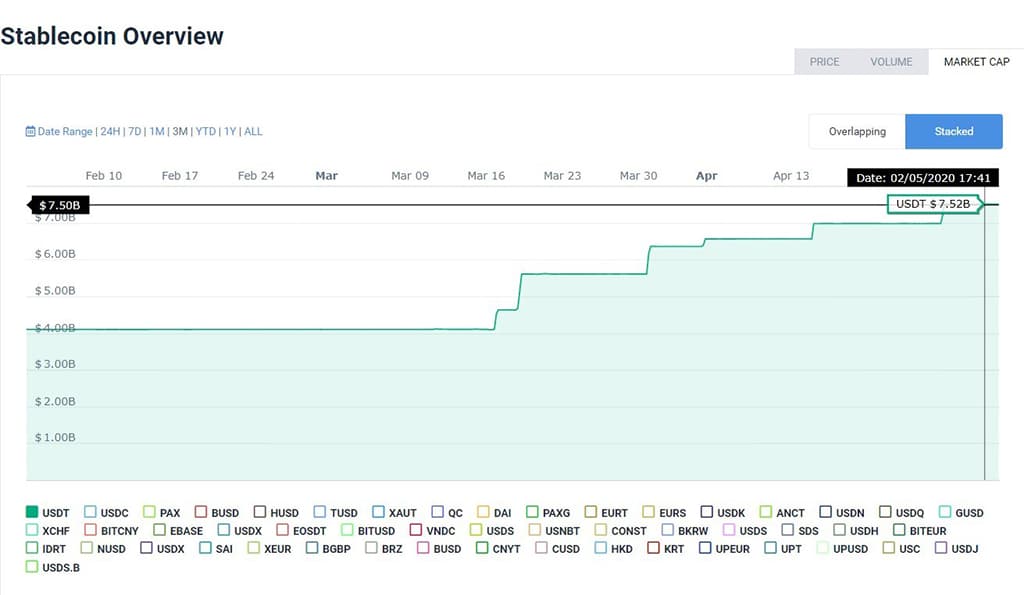 Many critics consider the new issuance of USDT the result of growing confidence in Bitcoin’s price expansion after the halving, as traders in anticipation of a bull market will get prepare to funneling their USDT into Bitcoin. This hypothesis is supported by a survey by Glassnode, in which data showed an increase in Bitcoin whales who flocked to the Bitcoin market since Bitcoin took a nosedive in March. Besides, the increase of USDT could attribute to the boom in new investors in the hope of benefiting from the rebuilding boom of Bitcoin.

Planning Ahead for the Bull Market

Each USDT could be the momentum Bitcoin needs to skyrocket. If we take a look at history, Bitcoin bull run always came after the previous halving events. At the first halving, Bitcoin’s price surged from $11 to over $1,100 in one year. As for the second halving, the price soared from $600 to $20,000 by the end of 2017. The same could be applied to the third halving, however, this process might take months to happen, so it is advised to diversify our strategies – be bold while staying safe.

Here are two options worthy of trying while waiting for the bull:

Option 1: A Wallet Designed for Traders and Holders

You might want to continue to hold your BTC and wait for the bull market to come after the halving. However, as we don’t know how long it will take, meanwhile you could consider storing your BTC into an interest-bearing wallet, where your deposit could gain up to a 30% annualized interest rate. Here you can learn more about Bexplus Wallet.

Besides buying more BTC and wait for the bull market, you could earn additional BTC with leverage trading, which allows traders to open a leveraged position X times more than their actual capital. By predicting the right trends of Bitcoin’s price, traders can earn greater returns within a shorter period of time. Bexplus, a leading cryptocurrency leverage trading platform, even offers a 100x leverage. Even at times of great volatility, you can generate profits with the help of Bexplus. And its Stop Loss & Take Profit options could help you lower the risks and lock in profits.

Bexplus is a recommended leverage trading platform that doesn’t require any KYC. Registration is being done through E-mail verification within a few minutes. Bexplus provides demo account with 10 BTC for traders to get familiar with leverage trading. Bexplus platform provides its users with a 100% bonus for every deposit, an affiliate program with up to 50% commission reward and 24/7 customer support. The application is available on Apple App Store and Google Play.