How the decentralised digital exchange is not so much making waves as it is shipwrecking it’s own green-ticked tokens.

We’ve already asked Waves Platform for comments on this story. We will update this article later.

“After this article was first published, the owners of Coinspeaker grilled me for at least an hour about my case. One of the CoinSpeaker’s co-founders asked me pointedly: “Daniel, we need the objective truth now because this situation is hard. 5000 BTC is big money!” I told them everything I knew and gave them what I had substantiating the claims in this article.

They suggested adding a token (no pun intended) paragraph defending myself against claims in the comments section that I did not deliberately try to wreck the long term prospects for my token prices. I did not. I can say that honestly. Achievement in this project for me is about building something that is here in 5 years time, not about a million dollars. If I had been that desperate for miliions of dollars, I wouldn’t have called off the ICO fundraise.

In the spirit of cooperation, let’s be fair here – like I say, I am grateful to Waves. They gave me a platform upon which to launch my ICO. All I have wanted since the start is to work with their team more closely – not against their team. I don’t want to sabotage Waves. This is an open invitation then for Waves senior management to reach out to me. I can sell well; they build great technology. Why don’t we work together on building blockchain? There are only a few of us in this business after all.

At the end of the day, there is room for all of us. At least for now. That won’t always be the case so let’s take advantage of it while we still have the chance.”

The last few weeks have posed something of quite a drama. Those of you who know Monkey Capital will know what I am talking about; for anyone that doesn’t, just drop by either the official Telegram for the company – or, if not that one, then there are, so I hear, numerous hate versions around full of anti-Monkey nutjobs.

Much of this drama, and, it must be said, most of the howling lunatics causing it, has been as a result of Waves. Waves is a decentralised exchange – which is to say, a peer-to-peer market for token trading.

I have mixed feelings about Waves. On the one hand, their platform is in major part what enabled me to get the Monkey scene going. When I started out preparing in late June for what was going to be an Initial Coin Offering of a “decentralised hedge fund” by the name of Monkey Capital, no one knew about the Monkey brand at all. Today, we can’t launch a token without it being snapped off the market in seconds. It’s been a pretty incredible past month and a half. Waves’ instant token-creation system – which costs next to nothing to use – combined with the ready-made market on its platform – is extremely easy to use.

That positive outweighed the negative of its crappy user interface for me back in July when I launched COEVAL (COE), a hybrid derivative token that given holders special rights to Monkey (MNY), the core asset of the project.

It is already well-known in Crypto circles how Monkey was the first to ever release a currency before its ICO. Not just that, we managed to create millions a day in daily trading volume. I couldn’t be prouder of the feat, since it is testament to how integrated and well-established the Monkey value model is within its 1,000+ strong community.‘

Despite this success, which should have been mutually-assured between the platform and my own firm, Waves’ behaviour in wrecking things is just too abysmal not to mention. Many in Crypto hear about the Monkey Capital-Waves drama, and, with a vague understanding of the fact that Monkey is a somewhat unusual ICO, they skim past the drama without looking closely at what happened.

On about July 4 or so, COEVAL, the project’s option token, was released to market on Waves DEX. Within a week the token shot up in price around 15,000%. I had testimonials flooding in from all over the world saying how grateful so-and-so was for making them $75,000 off just a fraction of the investment. Quickly, COEVAL established itself on Waves DEX as a mainstay, producing more volumes than even Waves itself on its own exchange.

After that, the price of COEVAL began to wobble, although volumes continued to rise as the project gained momentum. At this point, in another highly controversial move, I introduced a small amount of MNY – the ICO currency – onto Waves DEX. A director resigned. Outcry ensued. All hell broke loose. And then … MNY and COE began to converge and form a very reliable equilibrium price.

COE holders receive 10,000 MNY for every COE held after the ICO period. The market price for COE/MNY in early August settled at about 20,000 to 35,000 MNY per COE. If you think about it, this is a very logical price-point: since you have to forfeit the COE via trading it for MNY on exchange (whereas you don’t in the case of the 10,000 MNY / COE giveaway), COE’s discounted net present value is factored in (in other words, COE itself is priced at about 10,000 – 25,000 MNY, or about double what MNY itself is, which is not a bad guess given the relatively more familiar status of the market with respect to COE).

Then it was apparent that another hell was beginning to slowly freeze over. Slowly, COE and MNY began to trade incredibly high volumes, pushing the Waves DEX volumes over $2 million for the first ever time on August 4. The trouble was, they were trading in death spirals. Their values were diminishing by the day in great chunks.

Increasing volumes and decreasing prices are not a commonality in markets, as any economist will tell you. Usually, the depressed price will draw the volume lower, not pull it higher. So it was very clear that something was amiss for quite some time. Clearly, there was an artificial trading scenario pushing the price lower even as trading remained brisk. 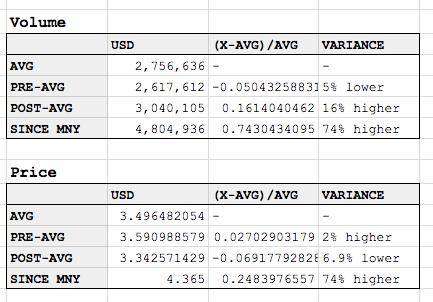 Looking at these tables, it becomes very clear why rapidly depressed prices of COE and MNY and simultaneously aggressively rising volumes were the case for investors in the Monkey camp: quite simply, Waves and its crew were using the Monkey assets to purchase huge quantities of Waves tokens, so they could push up the price of Waves.

At first, the scenario described above is very visible: when COE came onto the scene, Waves average volume shot up 16%. But something else happened, too: it’s currency price dropped 6.9%. Why? Simply, because many users of the Waves DEX were using Waves tokens to purchase COE, which as clearly displayed in the volume data, was significantly higher. The issue with this was that while it was pushing the price of COE up, Waves was getting hammered since technically, people were selling Waves tokens at the same time (even if this was not the intention, it was the effect nonetheless).

What was the response to be of the frustrated members and employees of Waves, who while finally achieving some sort of product relevance, were faced with declining asset values? Clearly, to place trading devices – known as bots – on the platform which would purchase huge quantities of Waves with the same assets that were previously being consumed by Waves tokens. Actually, this was evident in the trading data almost immediately when it was first implemented: simply, the Waves volume pairs were far higher than the BTC or ETH volume pairs, which in the case of BTC, was especially illogical, since most users deposit BTC on Dex, not Waves.

The issue with this strategy is that it meant that Waves had to manipulate prices across all its currency pairs with respect to COE and MNY, or else someone would see the relatively much-lower Waves currency pair and snatch up the bargain. Thus began an unintended – but apparently acceptable within the Waves team – process of constantly undermining the price of COE and MNY to take advantage of Monkey’s powerful marketing organ and influential buying community.

How likely is that? Apparently, as likely as it is that you can trust the exchange that hosts your ICO to make sure you come out ahead winning. Even if they did kind of put you there to begin with.