The investors are currently not very active with XRP, the crypto being bought and sold around $0.3182, reports Dmitriy Gurkovskiy, Chief Analyst at RoboForex.

The investors are currently not very active with XRP, the crypto being bought and sold around $0.3182, reports Dmitriy Gurkovskiy, Chief Analyst at RoboForex.

It’s been almost a month since the XRP started its correction after going up and diverging. The correction phase is obviously protracted, with the new lows being made rarely. Technically, the crypto is trying to break out the descending channel resistance and rise to reach the projection channel one at $0.3641, and then the major one at $0.4334. This should be confirmed with the MACD divergence. The support is at $0.3027, and in case it gets broken out, the coin may fall to the $0.2772 low and beyond.

On H1, after the Stochastic convergence, the price managed to break out the short term channel resistance and move up to the projection channel. The broken out resistance is now being tested, already perceived as support. This is at $0.3100, while the major one lies at $0.3052. After that XRP may rise to the resistance at $0.3250. 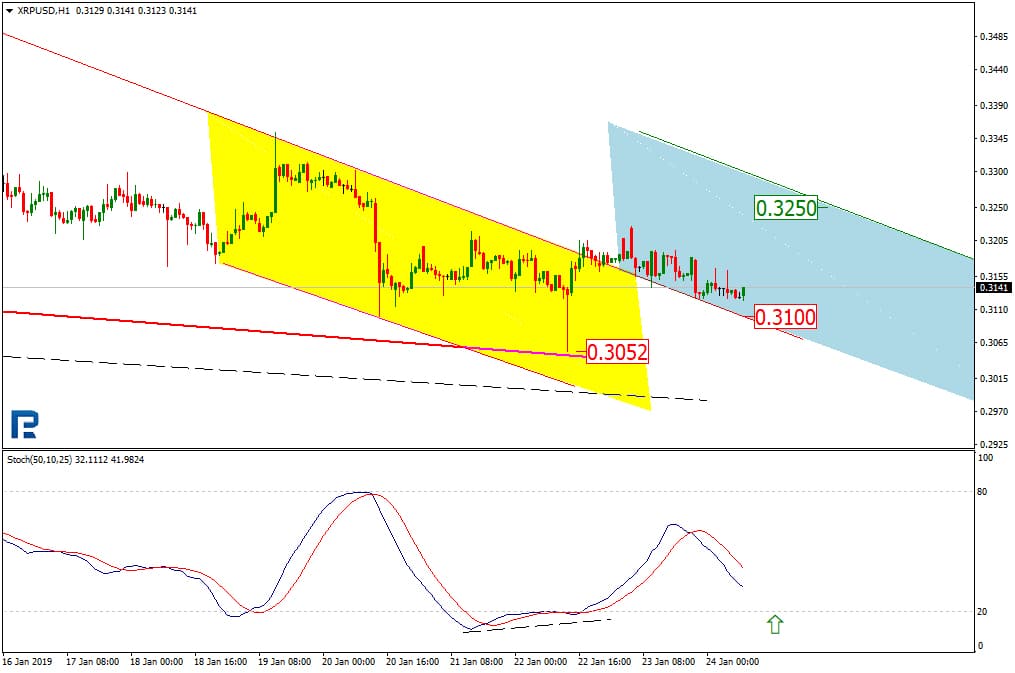 Meanwhile, 13 more companies joined RippleNet, the overall pool now amounting to over 200. Over the year, the network got 100 more new members. Ripple is actively pitching its XRP token for overseas payments, promoting its low fees and high transaction speed.

Rumor has it that Ripple is going to take part in scholarship programs, paying grants for blockchain projects in various universities. At first sight, one may think this has little to do with Ripple Labs interest, but the reality is different. The company is slowly but surely getting ready to the market situation when the crypto sector will be regulated very tightly, like it already is in China. This was among the company’s goals since last year, but Ripple prefers not to make haste here.

In this light, the Blockchain Economic forum taking place in Davos, Switzerland, since January 24, is quite interesting, as Ripple may share some info on its Asia-oriented expansion.

In early January, Ripple was able to partly calm down the panic regarding its blockchain vulnerabilities. The company officials said the issues were only due to the use of dated software released before August 2015. Ripple advised its customers to update their software or log in using the backup keys.

XRP traders are buying up the token amid speculation that Ripple and the SEC might soon settle their legal dispute.

Last quarter, Ripple sold $408 million worth of XRP tokens in Q2, a 49% jump from the previous quarter.

Ripple’s XRP registers a solid move as the Judge grants the company to present its defense in response to SEC’s Memorandum of Law.