On February 21, the Malta Financial Service Authority made an official post about the Binance exchange office address. The cryptocurrency market received a hit.

A bunch of news media was referring to Binance as to ‘Malta-based exchange’. The fact is that nobody saw that office of Binance situated in Malta. Some crypto journalists like Cryptomedication were asking people in Telegram chats for months: Where is Binance’s office? So far, cryptocurrency enthusiasts had nothing to answer.

Despite the press refers to some office, they often just call it ‘Binance office’ so you never ask yourself, where it is or whether it is real at all. And now, after the MFSA official statement, people honestly have no idea where the office is.

What the public is certain about, is that it’s not on Malta:

“Following a report in a section of the media referring to Binance as a “Malta-based cryptocurrency” company, the Malta Financial Services Authority (MFSA) reiterates that Binance is not authorized by the MFSA to operate in the cryptocurrency sphere and is therefore not subject to regulatory oversight by the MFSA.

The Authority is, however, assessing if Binance has any activities in Malta which may not fall within the realm of regulatory oversight. Admission of virtual financial assets to trading and/or for offering virtual financial assets to the public in and from Malta requires an MFSA license in terms of the Virtual Financial Assets Act (CAP 590) of 2018.”

Not sure, but it looks like Maltese authorities have decided to look into what property or assets does Binance holds on the possible local accounts.

So, Where Is Binance Situated?

The real home for ‘innovations’ seems to be the Seychelles and Cayman Islands, according to the report by investigative outlet Decrypt published on February 13, 2020. Per the outlet, Financial Times already made partial mention of the real Binance office location in their piece titled ‘Crypto exchange Binance ordered to suspend operations in Japan’ back on March 23, 2018.

The title itself is very interesting. Japan is one of the best countries in the world regarding how to use and regulate cryptocurrencies without harsh restrictions. For the average person, there are no burdens to create a crypto venture in Japan. But if you try cheating, they’ll kick you fast.

Changpeng Zhao, Binance CEO, was quick to respond via Twitter to the wall of questions that started surrounding the CEO.

BREAKING: Nothing has changed in Malta, for Binance or any other crypto exchanges. No licenses were granted to anyone by Malta, as of yet.

Some media, even crypto media, has such a bad habit of releasing misleading news that only hurts their own credibility and our industry. https://t.co/C9MdCngx70

Worth noting that ‘CZ’ may face certain sanctions from any regulators who will consider re-checking their papers with Binance like the Maltese authorities did. Also, Binance Chief of Growth Ted Lin earlier told the Decrypt during an interview that the exchange has a ‘spiritual office’ on Malta. The main one is, however, situated in another country:

“We have offices in Malta for customer services, and some compliance people there, but it’s not the headquarters per se. It’s the spiritual headquarters”

What is a spiritual office?

So, Financial Times and Decrypt found that Binance is located on the Cayman Islands, as well as on Seychelles. But polls show that many of the market participants didn’t know about this till today: 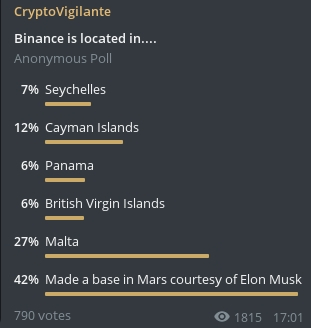 And here’s the survey by Larry Cermak:

Binance is based in

So, many people think that Binance had its office on Mars, or they have only partial information. Interestingly, back in September 2019, Binance made investments in a Chinese company named ‘Mars Finance‘. Do they have a ‘spiritual’ office on Mars? Conspiracy theorists and mediums can draw shiny conclusions on here.

The Binance card is in the beta launch stage, and the crypto company assures that it will be fully available for all users in the coming weeks.

The blog explained that Binance offered a bid of $15 million for the assets, noting that $12 million would be deposited to Celsius estate and $3 million to be disbursed to relocated customers on a pro-rata basis.