Bitcoin price has managed to go above 6,700 again, with the market data showing that the first cryptocurrency is ready to take off. Halving will happen roughly on 13 May 2020. Traders accumulate BTC.

The Glassnode data shows that BTC holders are sending their coins away from the exchanges and even the custodial services. Per the stats, Bitcoin price may be in the accumulation stage. After it ends, the bull run is imminent.

Since March 18, the major exchanges were losing tons of Bitcoins:

Despite the volatility, #Bitcoin holders appear to be withdrawing their funds from exchanges. Outflow has been increasing daily since March 18.

According to our labels, $BTC exchange balances are the lowest they've been in ~8 months.https://t.co/iwiDqNlvuI pic.twitter.com/mnPb5vj6Yu

The exchange balances have reached the 6 months lows, indicating that investors do care about the market dangers. LongHash reports that Coinbase cold wallets had only ~1 million bitcoins by the end of January 2020.

Worth noting that four days before the March 13 market crash, the network analysts registered a record in exchange wallet top-ups. Some of the wise Telegram channels gave reports that the whales are ready to dump a ton of coins onto the market: 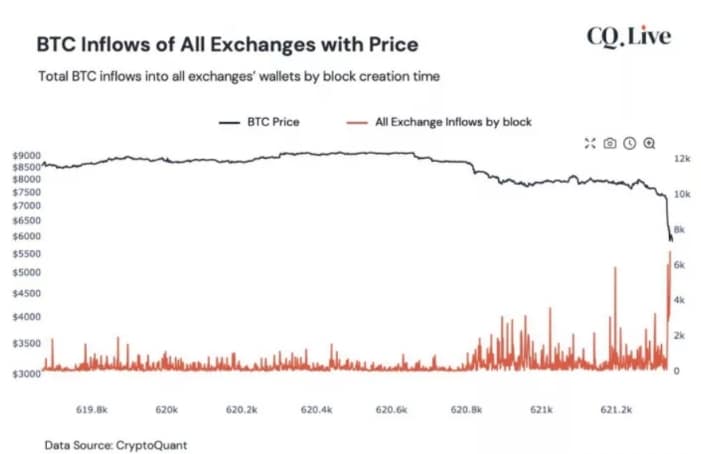 And that’s exactly what happened. Causing the drop in Bitcoin price and hash rate. Both had lost around 40%, causing the domino panic sell. But hash rate regains during the last 24 hours, shows at least 30% plus. Bitinfocharts show 103 EH/s, while Blockchain.info claims Bitcoin possesses 112,4 EH/s in hash power.

Now, the situation seems the opposite. The whales withdraw, as well as many of the investors. So the price is setting itself to go up, but later. Different market analysts claim a lot of reasons behind people’s decisions to withdraw the coins from custodians.

One may think this is thanks to the halving event. It will approximately take place on 13 May 2020. Before the BTC halving, it is better to take full control over the coins. In case you store bitcoins in an online wallet, the secure way of passing different network upgrades is to withdraw to cold wallets. Keep in mind that in case some sneaky actors initiate hard fork, you’ll get a piece of a pie in a new blockchain if you control the private keys.

Too Many Shady Exchanges in the Space

One of the side reasons behind withdrawal may be the carnival of bad exchanges. Recently, firms like BitMex, Bitfinex, QuadrigaCX, Binance, and TRON Foundation received different kinds of warnings from the regulators. MakerDAO and Crex24 suffered sophisticated hacker attacks with huge losses. Yet, they have not reported about the hacking, busting allegations with juridical lingo or giving responsibility to ‘community consensus‘:

“The Maker Foundation, a body charged with getting the MakerDAO network up and running, today announced that it has relinquished all control of its governance token, MKR, to the governance community. That means that MKR holders are the only ones who can vote on the fate of the network.”

This decision follows the recent Ethereum drain from the MakerDAO contract. When will the Ethereum holders learn that anything having ‘DAO’ in its name is ’empty’?

Per John Isige from FXStreet, Bitcoin will have to move below the acceptable minimums before reaching the next $8,000 target. Now, the traders notice Bitcoin is facing a massive downward pressure at levels of $6,700 – $6,900. The congestion zone is $7,000, but if it will not be reached, Bitcoin will have to dive to $5,000 or below. This may be the boost needed to make Bitcoin rise to more substantial levels thanks to whales inflow.

John also notes that the resistance at the $7,000 level is unbreakable, despite the market looks healthy.

Trevor Smith from Bitcoinist says Bitcoin can rise above $7,000 as soon as three problems solved. The first one is global market uncertainty. It makes trades sell more of the assets thanks to coronavirus and the supply chain congestion. The second reason is the need for quick cash. If the U.S. based Bitcoin holder wants to spend more cash than he has, cryptocurrency will probably be spent. Not the credit card, despite the people like claiming that it’s better not to spend the coins.

The final reason, per Trevor, is that young people are working on household things now. Many people are distracted from the blockchain space. They need to buy the toilet paper, and the alcohol, and candles, and maybe some honey. Hence, they are having less time for trading, and prefer to store the coins offline while it settles.

Subscribe to our telegram channel. Join
Related Articles
Work It 5 Ideas on How to Earn on Crypto Portfolio When High Volatile
By Andy Watson February 1st, 2023

Dominant crypto exchange Binance looks to draw on community feedback to shape products and services better in the future.

The co-founder of Bitzlato stated that they will allow 50% of user funds in Bitcoin held in Bitzlato wallets to be withdrawn on the same day we launch.