Anomalous growth of Bitcoin and decrease in the USDT on Bitfinex: what really hides behind the scenes, what does it have to do with mysterious IMMO and whose trading bots in charge of massive USDT sales? Answers seem to be found now.

One Bitfinex employee, with access to insider information, has shared details of the Bitfinex investigation in regards to the anomalous growth of Bitcoin and decrease in the USDT. According to the employee, Bitfinex itself was not connected to the situation. Although, a third-party connected network of trading bots, that were set up for massive USDT sales, were implicated in the Bitcoin exchange rate manipulation.

Bitfinex managed to find a connection between the accounts and, following the transactions of the wallets belonging to them, de-anonymized the possible initiator of the one-day Tether ‘crisis.’ An independent analyst who prepared the report for Bitfinex believes that IMMO was involved in the attack, which many media associate with the dynasty of bankers – the Rothschilds.

At the same time as the price of Bitcoin showed anomalous growth on Monday, approaching close to $7,800, the Tether ‘USDT’ rate fell by about 7% against the US dollar, to which it is theoretically pegged 1-1. It is noteworthy that the Bitcoin spread at its peak moment reached about $1,000. While Bitfinex registered a course at $7,788. At Coinbase, for example, the maximum price of Bitcoin was $6,810. 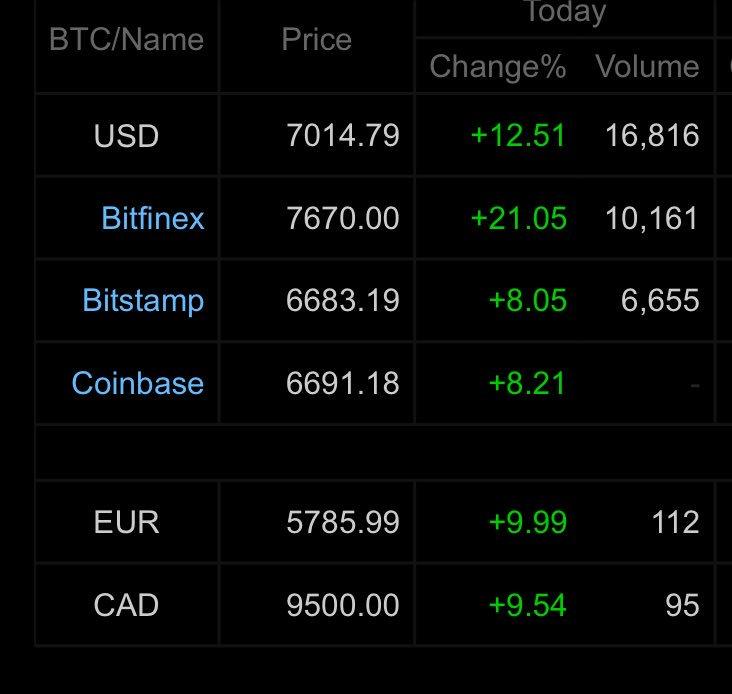 The big difference in the Bitcoin exchange rate on Bitfinex and other exchanges was explained by the divergence of the USDT rate and the real US dollar. The Bitcoin increase was due to the massive sale of USDT on the Bitfinex exchange, which was reinforced by the growing FUD around the Tether situation. 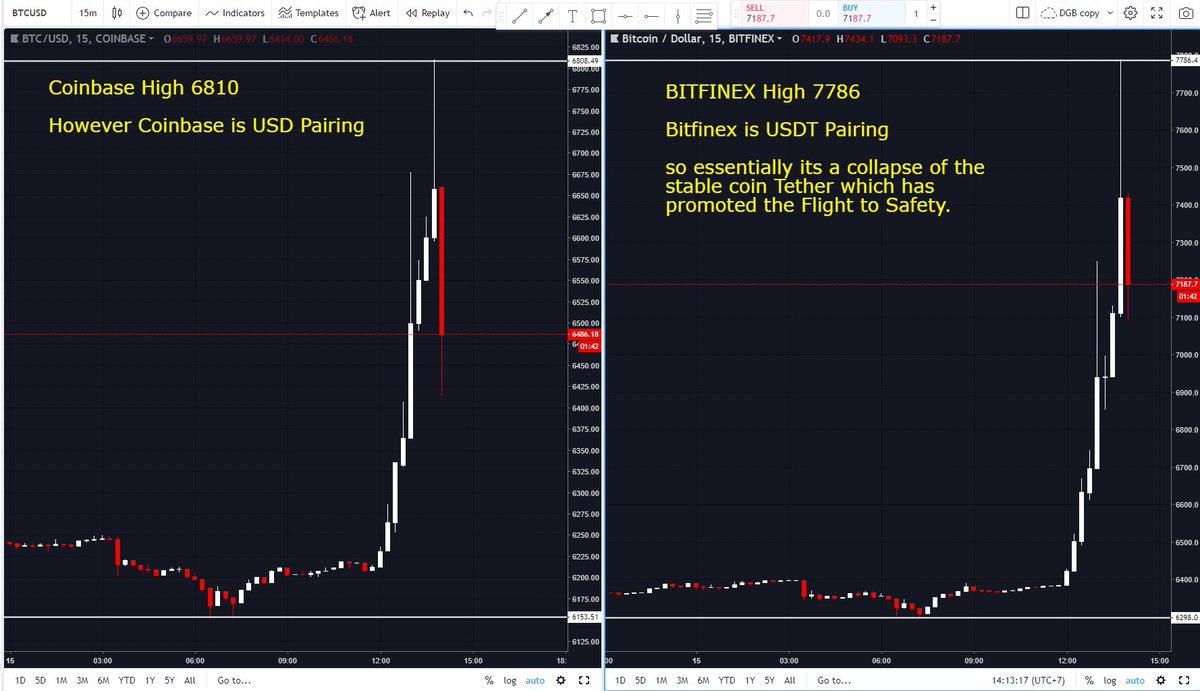 At the moment of the rapid growth of Bitcoin, Bitfinex experienced technical problems due to a sharply increased number of orders. The analytical system signaled suspicious activity – the launch of trading bots. According to our source, the trading bots, apparently, were connected in one trading system and managed centrally.

With accuracy of a fraction of a second on the order of hundreds of accounts. Orders for the purchase of Bitcoin with USDT in large sizes were created, each time increasing the purchase price. This scheme, being quite widespread on the cryptocurrency market, has not worked with such colossal trading volumes until today.

As you know, the exchange has complete information about the book of orders, which is also stored in history, because the exchange is engaged in servicing these transactions. Possessing information about the transactions of their users, Bitfinex employees managed to isolate the total mass of ordinary users who made deals at the moment of the pump, – the trading bots.

According to our source, hundreds of accounts that had not been caught in suspicious activity fell under suspicion. All suspicious accounts were blocked until their activity could be clarified. It is noteworthy to mention that on each of the accounts nearly equal amounts of USDT were distributed.

Thanks to the open blockchain, we managed to find out that the wallets to some degree had common transactions. That is, the funds came from a pair of ‘whale’ addresses with large balances to a dozen other addresses, from which they were partially released onto the Bitfinex exchange, in order not to draw attention to the circulation of large amounts.

Until the moment of this investigation, of course, no one thought to link these transactions in the blockchain. But when suspicions appeared, the method of de-anonymization was applied, which allowed establishing the identity of the wallet to the main suspect accused of manipulating the USDT course.

It turned out that one of the ‘whale’ wallets is associated with IMMO. The creators of which, according to numerous rumors, are the Rothschilds. Back in May, linking IMMO with the Rothschilds, Vitalik Buterin initiated a discussion about the power of the oldest banker dynasty. The topic of IMMO has also been touched on by several crypto-experts, including Tim Draper, Lon Wong, and Jimmy Song.

Why did IMMO Want to Attack Tether?

Since the IMMO project aims to become a reserve cryptocurrency, the Rothschilds have a strong motivation to clear a place in the market for their own global project. Today, Tether is the most popular stablecoin with a huge daily trading volume (~ $ 2.8 billion), and therefore is an important component of the cryptocurrency market ecosystem. 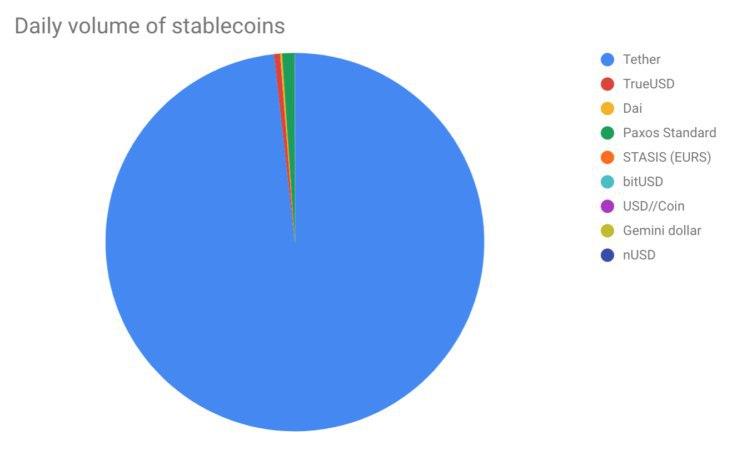 Tether Limited, which is a Tether issuer, has close ties with the largest leading cryptoexchange – Bitfinex. These companies both have the same managers and investors, and the majority volume of Tether passes through Bitfinex. And Rothschild’s IMMO, in order to get the leading position, needed to eliminate its competitor – Bitfinex. To this end, apparently, the attack on the USDT was systematically organized. It is worth noting that IMMO did not make a critical blow, but in tandem with growing problems and doubts from the community, this hit could be the spark that lights the fire.

Increasing FUD around Tether – Are the Problems Genuine?

For a long time, there have been controversies around Tether, since it is not clear whether the USDT is fully supported by equivalent fiat dollar reserves. While Tether claims that their dollar reserves fully support the issued USDT 1-1 tokens, many critics have challenged this statement. One of the reasons being their dubious banking history.

In April 2017, the banking relationship between Wells Fargo and Bitfinex ended. According to Bitfinex, Wells Fargo suddenly stopped processing transactions, as a result of which a large number of user funds were blocked. Then Bitfinex and Tether allegedly transferred their stock exchange business to Noble International at the end of the year, before starting to transfer their balances at the end of this summer. Not so long ago, the public began to discuss the insolvency of Bitfinex, due to the problems that had arisen at Noble Bank.

On October 11, Bitfinex stopped accepting Fiat and “expects the situation to normalize within a week”. On October 12, this information was confirmed by the Director of Public Relations of Bitfinex Cryptobirder Kasper Rasmussen. Furthermore, Kucoin announced that it was going to delist USDT, and there have been rumors that Binance will also delist the USDT. At the same time, Okex, Kucoin and Fcoin announced the listing of new Stablecoins, Tether’s substitutes.

It was not surprising to see that the ‘stable’ coin USDT became unstable in this situation. For several days, a flurry of criticism fell on Bitfinex and Tether from all sides, and as a result, huge sums were withdrawn from the digital dollar. It is possible that IMMO made its main contribution to the blow to Tether’s image. Moreover, the IMMO project has entered the active phase.

This month, according to media reports, the Evangelists of IMMO’s High1000, a community of cryptocurrency experts, held several private events in primary financial capitals of the world. It is already officially known that one of these closed meetings was held in Tokyo. Nevertheless, we must keep in mind that IMMO is positioning itself to become a global reserve cryptocurrency, backed by intrinsic value.

Can Tether provide real evidence of the solvency and security of their token? Or should increased criticism and delisting of the first digital dollar be a correct precautionary measure? If Bitfinex really has proof of the transparency of its business, they will have to provide it as soon as possible. Especially with the advent of a new competitor in the market, Tether must be ready to defend its leading position.

Genevieve Scanlan is currently working as a journalist in Australia, Sydney. Genevieve has been interested in blockchain technology since 2016, and recently started to write analytical reviews on the cryptocurrency market.

Before his latest move to push for crypto payments at Capitol Hill, Cruz has always supported crypto assets.