Bitstamp account holder details may have been compromised after the company advised customers not to send Bitcoin to their hot wallets Sunday, January 4th, 2015.

Since April 2013 Bitstamp has been operating from the United Kingdom. CEO Nejc Kodrič, who co-founded the company in 2011 with Damijan Merlak, currently heads the company.

The problem first came to attention when users were confronted with empty wallets, before later receiving a message from Bitstamp that read as follows:

You should STOP SENDING bitcoin deposits to your Bitstamp account IMMEDIATELY as private keys of your deposit address may be lost.

Your bitcoins already deposited with us are stored in a cold wallet and can not be affected.

We will send you more info as soon as possible.

The user’s empty wallet was then replaced with a message further stating that new deposit addresses will be forthcoming. 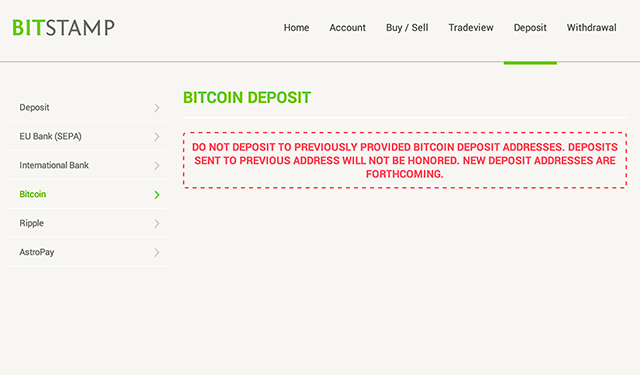 A Bitstamp source has told CoinFire:

We are working to determine what has gone wrong. The majority of our coins are swept and placed in cold storage often so this shouldn’t be a major issue right now but we are still working to determine the breadth of the issue. This seems to be a server issue and not a compromise but our teams are still investigating.

The situation may be compared to the one with Mt. Gox implosion. However, despite the fact that lost bitcoins are involved in both situations, the comparison is considered thoughtless.

Concerning Mt. Gox, almost 99% of all the bitcoins that were stolen from the company last year, were a result of fraudulent activities, according to Yomiuri Shimbun newspaper. Although the company stated that US$370 million in digital currency went missing due to hacker attacks, just 1% of digital currency was actually taken by hackers.

The case is being investigated by the Metropolitan Police Department (MPD), which has already claimed that 650,000 bitcoins disappeared from the exchange in total and only 7,000 due to hacker attacks. According to the article, the remaining 643,000 bitcoins have disappeared through internal means.

The police suspect that an unknown third party may have taken the bitcoins owned by Mt. Gox’s customers. Most of the missed bitcoins were never found, except for 200,000 bitcoins that were discovered then in one of Mt. Gox’s accounts.

The Bitstamp Earn product will offer returns only on staking ETH and ALGO. Note that it won’t be involved with any kind of lending process.

Zagotta said that he will be working towards more listing on Bitstamp to satisfy more crypto customers.