The bearish pressure on the market remains intact. However, the assets are testing the support level, and if the bulls manage to hold the levels, we should expect a good bounce up and an attempt of an upward movement.

BTC and ETH are forming reversal patterns both on the RSI and the price charts. Of course, buying on the falling market is not always a good idea. To be sure, a buyer must see a breakout of the closest resistance lines. The other altcoins follow the leading assets but show no reversal patterns yet. In the case the Bitcoin performs a bounce up, the whole market might demonstrate positive moods and change the downtrend for an uptrend.

The quotations of the leading cryptocurrency are clinging to the support level. However, the descending impulse is not over yet, the prices remain under the Moving Averages. However, the Failure Swing pattern is forming already on the RSI. In this case, with the breakout of the level 50 on the indicator, we should expect a breakout of $7670 on the price chart by the closing prices. As the main trading idea, we should expect another attempt of testing the support area near $6800 and the beginning of growth. The end of the bearish movement should be confirmed by a breakout of the upper border of the descending channel and securing above $9800. With such a scenario, we may think about a test of $13900 in the midterm. The positive scenario might be canceled by a breakout of $5750, which will signify an escape from the channel downwards and a possible decline to $3500. 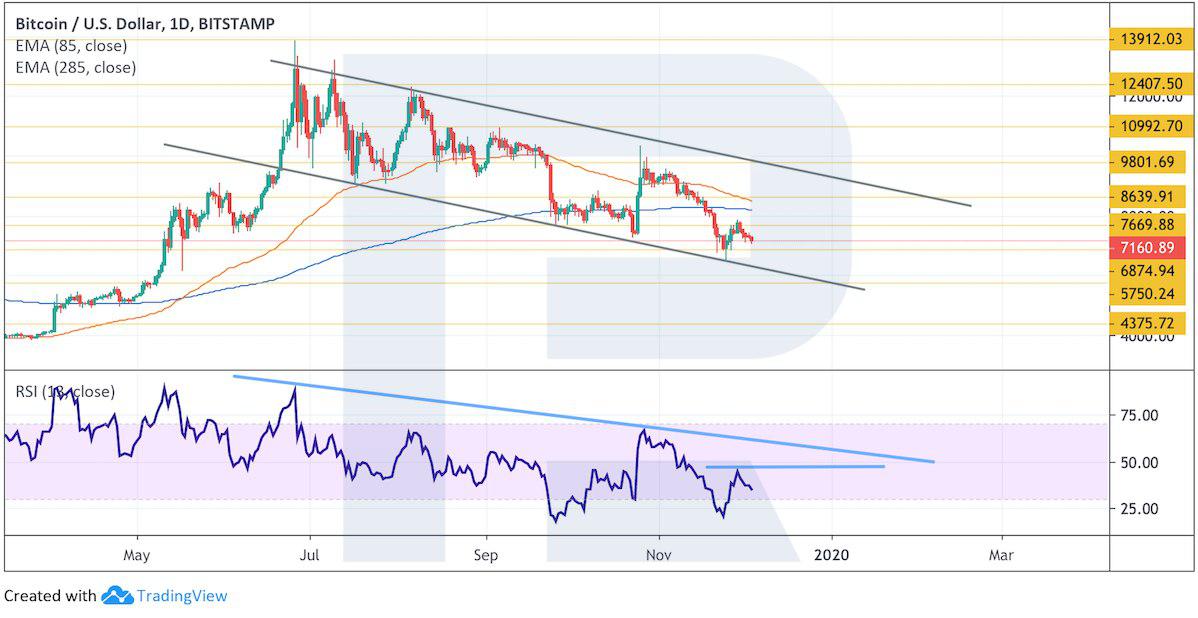 On H4, the quotations are also pushing off the MAs, which means bearish pressure and a descending impulse. The descending may continue from the current levels to $6875. From this level, we should expect an attempt at growth. This scenario may be confirmed by a bounce off the support line on the RSI. The second signal may be an ascending Wolfe Wave forming. The aim of its execution will be at $10990. 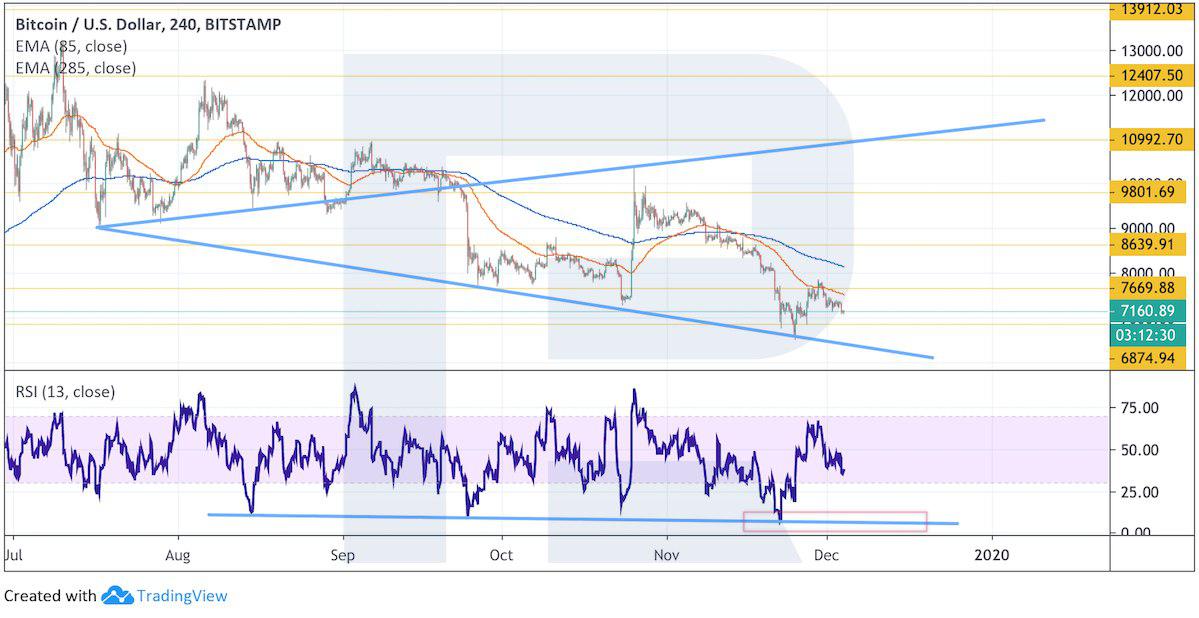 Here, the support level is also tested near $150. On the RSI, there is a reversal pattern forming. On the whole, the Bitcoin and Ethereum charts are similar to each other with the potential for growth. However, there first might be an attempt of falling to $145 and only after that growth may follow. This should be confirmed by a breakout of the upper border of the descending channel and securing above $185, in which case we might expect full-scale growth of the digital asset. The scenario may no longer be valid if the prices fall below $120, which will signify a probable breakout of the local minimum at $100. 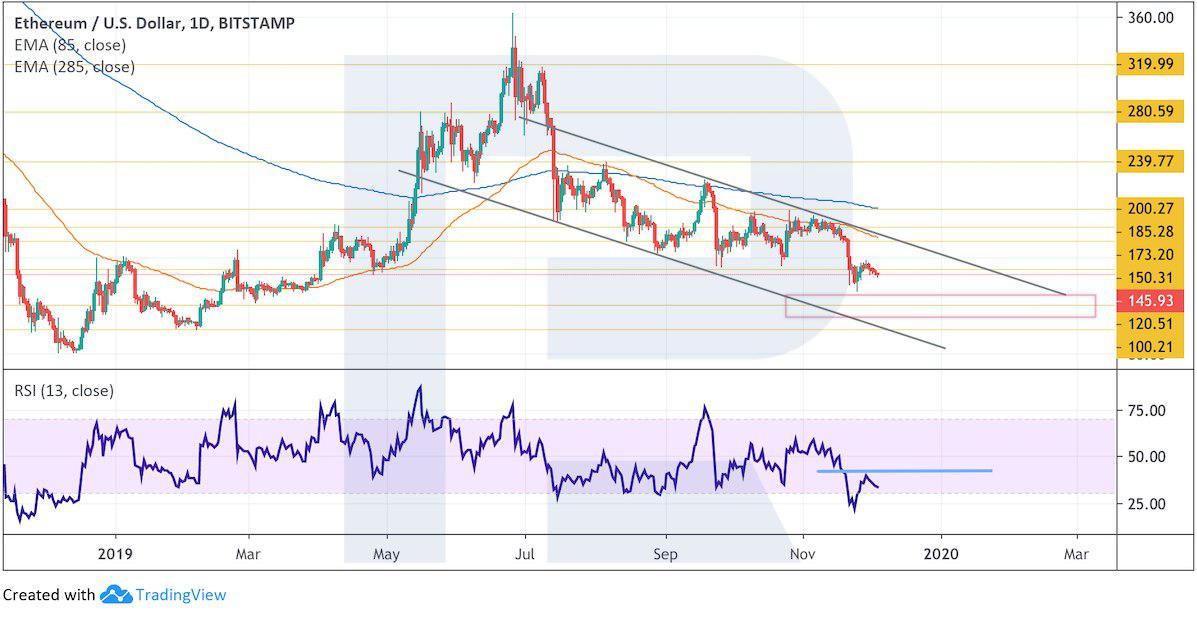 On the smaller timeframes, there is a bullish Wolfe Way and a Double Bottom pattern forming. If the bulls manage to break through the resistance area and secure above $160, we should expect the confirmation of the execution of the patterns with the first aim of growth at $240. An additional signal of growth will be a test of the ascending support line on the RSI. The scenario may be canceled by a strong falling of the ETH below $130, which will mean the cancellation of the pattern and further declining. 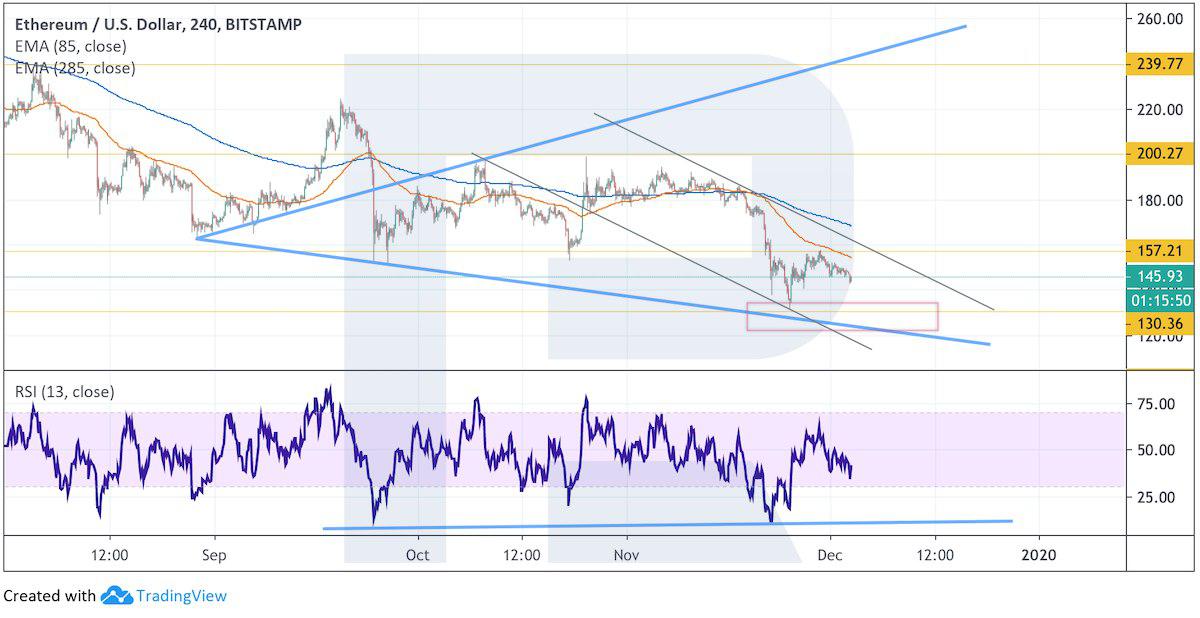 The quotations remain under the Ichimoku Cloud, which still signifies a downtrend. However, we have seen several tests of the support line on the RSI, the prices have not declined too much down. So, there is potential for a bounce and a reversal of the current downtrend. An important support level is at $2.07, if the buyers manage to hold this level, we may start talking about the beginning of growth. This idea will be supported by a breakaway of the upper border of the descending channel and securing above $3.83. The growth may be canceled by further falling below $2.07, in which case the aim of the decline will be at $1.45. 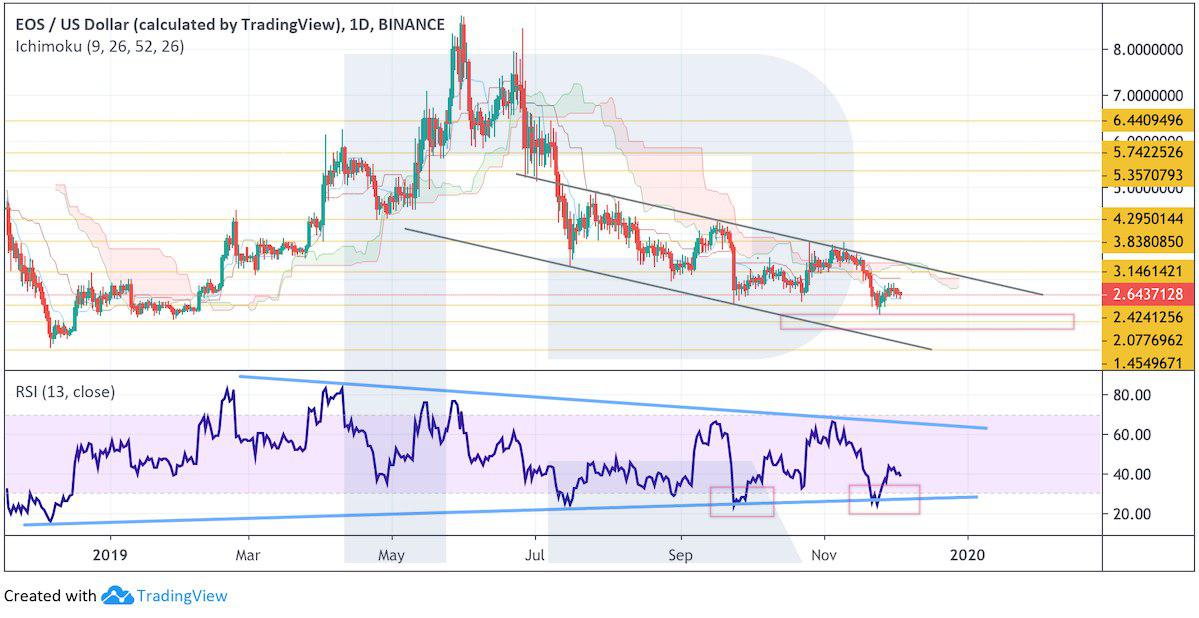 On H4, the EOS is trading inside the Cloud which signifies pressure from the buyers. The growth will be confirmed by a breakout of $2.92, in which case the price might grow to $3.85. The variant, positive for the bulls, might be canceled by a breakout of the support level and securing under $2.42, which will mean the renewal of the downtrend and falling below $2.07. 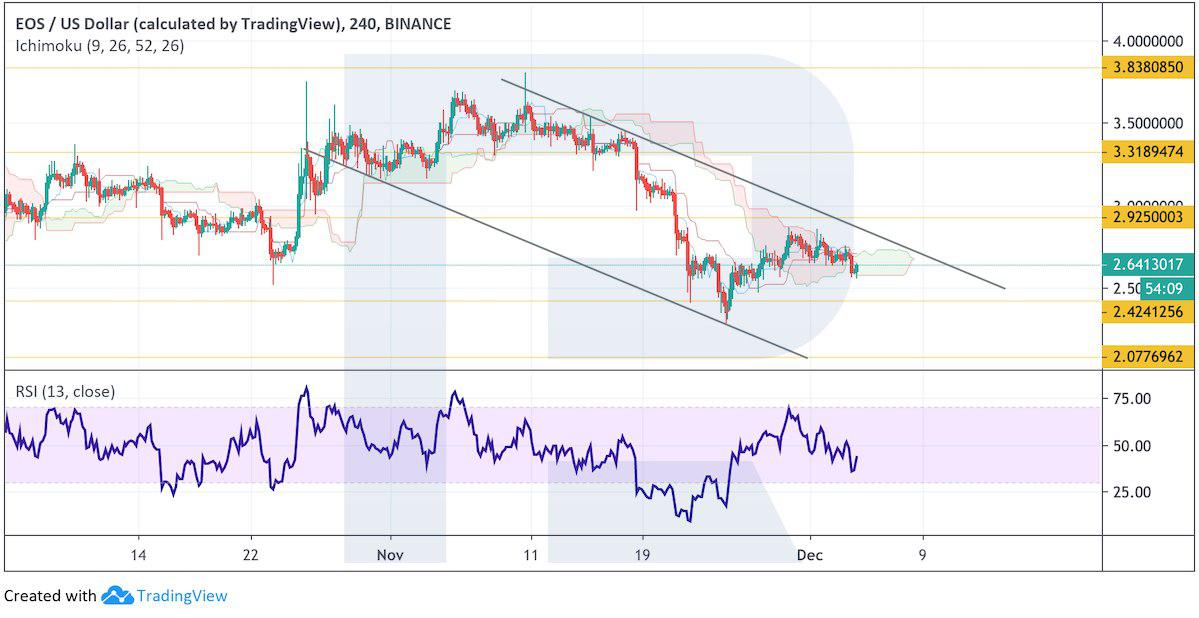 The quotations keep developing a downtrend, the prices remain under the middle line of the Bollinger Bands. Here, an important support line lies as well. A bounce of the trendline on the RSI. The idea of the growth should be supported by a breakout of the upper border of the descending channel and securing above $64, in which case the uptrend will develop on the full scale with the first aim at $79. The scenario may be canceled by falling below $42, in which case we risk seeing the crypto fall below $21.80. 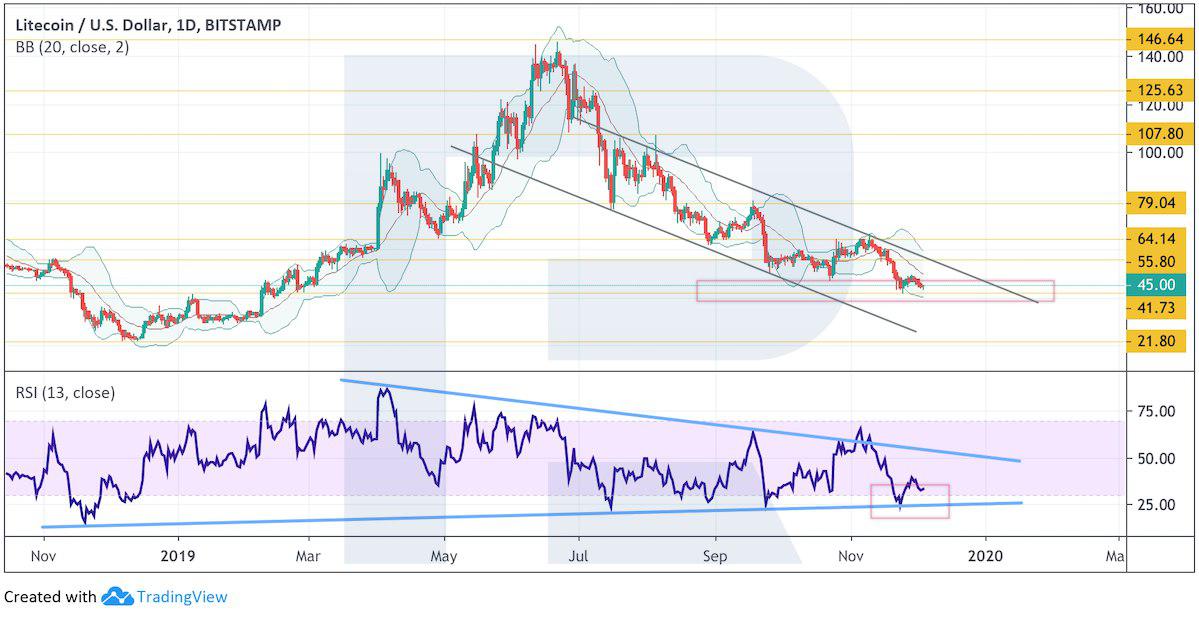 On the smaller timeframes, there is potential for a Double Bottom pattern to form. We should expect a test of the support at $42 and the beginning of growth. This should be confirmed by a breakout of the resistance line and securing above $50. An additional signal here will be a broken trendline on the RSI. The scenario may be canceled by strong falling below $40, in which case we might see further declining. 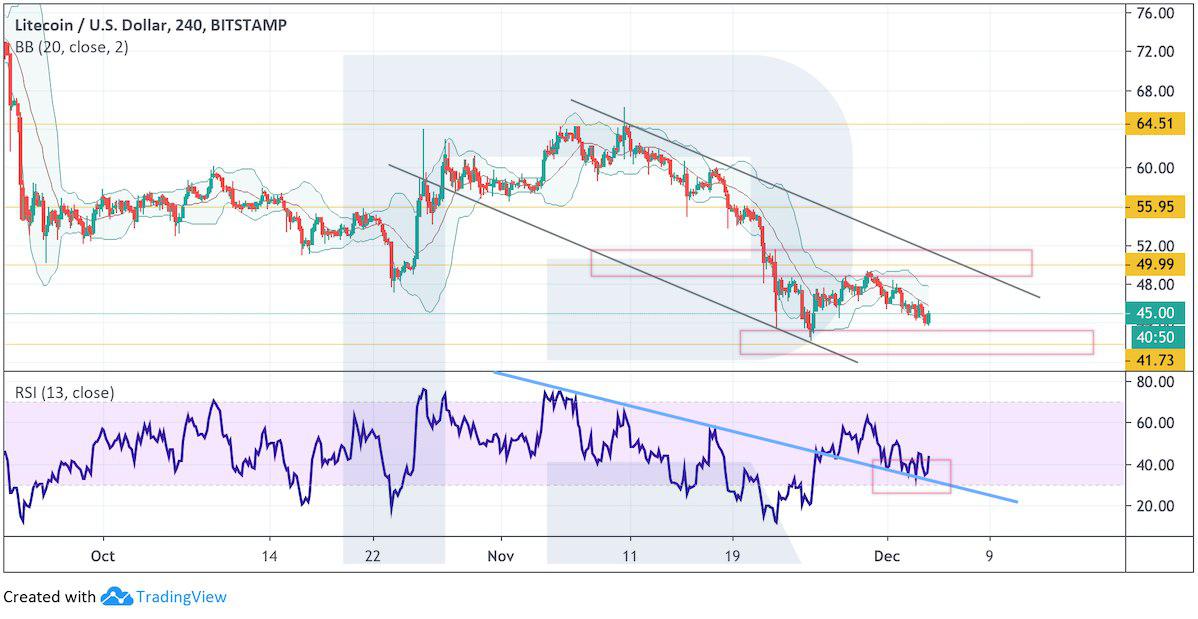 On D1, the price remains under the MAs, which signifies a downtrend. However, the RSI values have bounced off the support line again. Currently, there is potential for testing $200 and the beginning of growth with the first aim at $265. A breakout of the upper border of the descending channel and securing above $340 will confirm the beginning of the uptrend. The growth may no longer happen in the case of falling below $160, which might be followed by further decline with the first aim at $100. 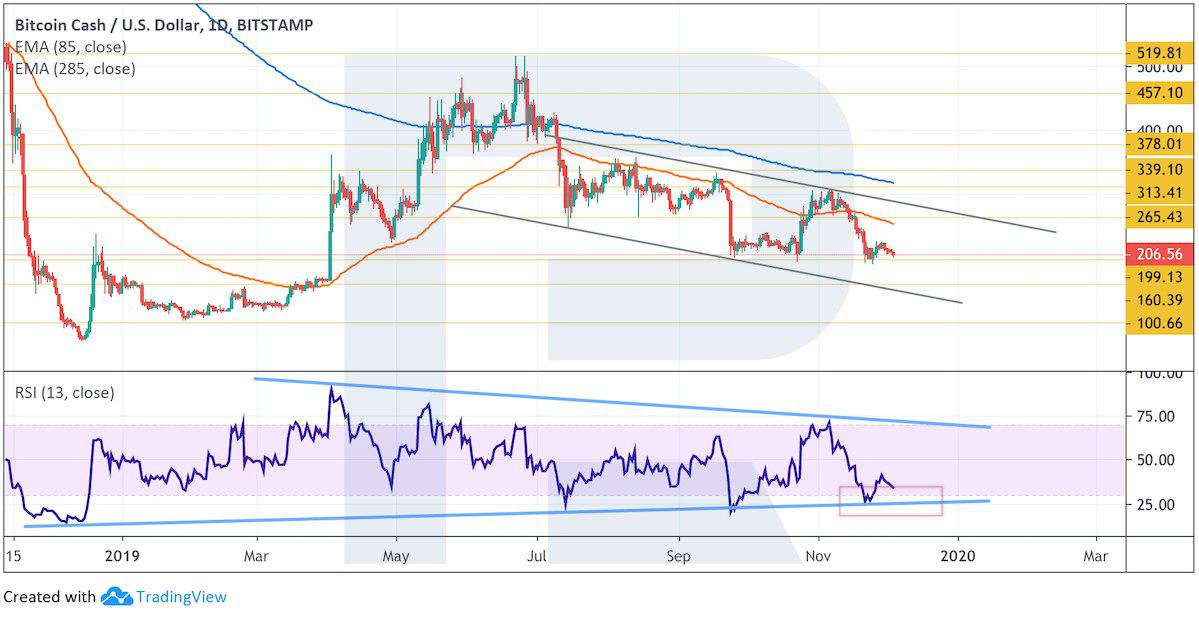 On the smaller timeframes, it is the fourth time that the prices test the support area. If the buyers manage to hold this area, we should expect the beginning of growth with the first aim at $265. This idea may be supported by a test of the support line on the RSI. The current structure of the price movement may be regarded as a reversal Double Bottom pattern forming. The growth may no longer happen if $195 is broken out, in which case the aim of the decline will be around $160. 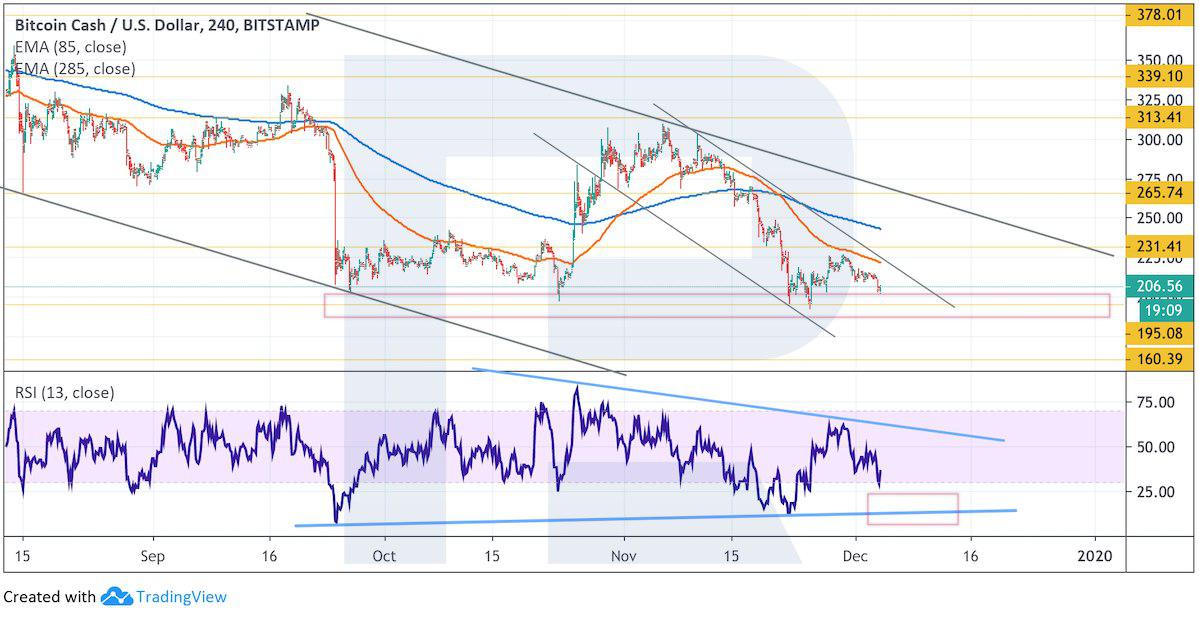 The crypto exchange revealed that layer 2 ETH deposits are also available on the platform.

Block has released its Q1 2022 earnings report amid an overall slump in Bitcoin price which impacted its Cash App business.