Looking at the past trend of the surge in Ethereum’s realized value and MVRV ratio, ETH price could surge another 100% from its current all-time high.

Although Bitcoin (BTC) and other altcoins have taken a step back today after Wednesday’s rally, Ethereum (ETH) price marches forward with full strength. The world’s second-largest cryptocurrency has hit a new all-time high of $2480 as it approaches its new milestone of $2500.

At this price point, Ethereum (ETH) is already trading at 230% returns year to date again beating Bitcoin (BTC) by double the margin. At press time, ETH is trading at a price of $2477 with a market cap of $286 billion. It has also overtaken some of the biggest tech companies like Intel, by market value.

While Ethereum (ETH) enters a new price discovery zone with ATH, the investor optimism is still higher. Some of the on-chain data for Ethereum shows that there’s still some scope for a further price rally.

This multiple arrive by dividing the market value of ETH by its realized value called the MVRV ratio. The MVRV Ratio is a good indicator to determine the mania around the crypto asset. Typically, the mania is blown out of proportion when MVRV tops the value of 4, while MVRV value below 1 suggests a strong buying opportunity.

Below is the chart for Ether’s MVRV ratio since its inception. Since December 2019, the MVRV ratio has an upward trend channel. 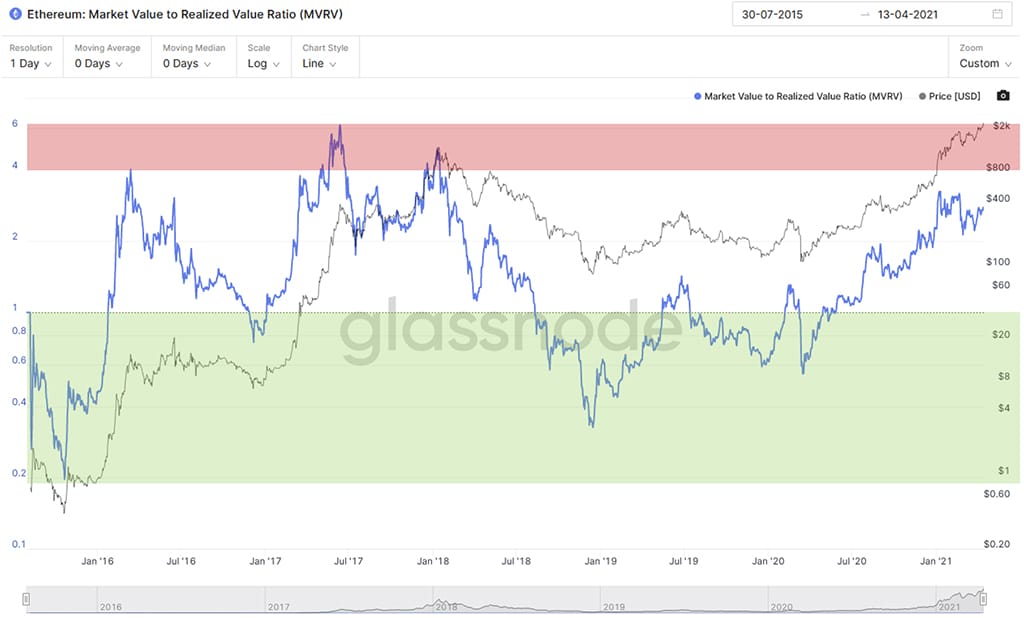 If the trend continues further, we expect the ETH MVRV value to shoot up to 5 by the end of May. Based on its realized value of $800, this could mean that Ether’s market value will climb to $4000. This is an additional 70% surge from its current all-time high.

Thus, with an MVRV ratio of 5, the market value can surge to $5000. Meaning we could potentially witness another 100% price rally just within two months.

Bitcoin Price Slips Despite Strong US Job Data in September