Crypto startup FinNexus is contemplating to use XRP Ledger to build a tokenized asset platform expected to be rolled in the last quarter of this year.

FinNexus, an open finance protocol designed to create a bridge between different blockchains, announced via a Medium blog post plans to develop a tokenized asset platform on XRP ledger. The company will run a pilot project of the tokenized platform in Q4 this year.

To develop the BIP product, FinNexus will turn to Wanchain (WAN) blockchain to get more avenues to connect different blockchains. In the case of PCAP, the startup in contemplating to employ XRP Ledger to potentially “connect different digital currencies including Ripple and XRP.”

Per the announcement, FinNexus wrote:

“We will use XRP Ledger to issue tokenized assets that could be exchanged by stablecoins on XRP. And then we will make this function to be part of Assets Producing Protocol and Assets Trading Protocol.”

The end-goal for FinNexus is to create a “fat protocol” framework that connects public blockchains and their second layer solutions such as exchanges, dexes, payment channels, and legacy financial systems among others.

FinNexus’ spine is built on the Wanchain public blockchain protocol but the company wants to expand and work with as many open blockchain protocols as possible. The firm states that “cooperation and partnership” are very important in its quest for success. FinNexus will disclose more tokenized products in the second quarter of 2020, the announcement said.

The startup is planning to have its FNX token, built on Wanchain’s WRC20 protocol, listed on several exchanges when their Initial Convertible Token Offering (ICTO) ends in February. An ICTO is a variant of an initial coin offering (ICO) albeit with a few modifications to comply with various regulations such as securities laws.

The announcement for building a tokenized asset platform was part of FinNexus’ 2020 roadmap, which has been broken down into three parts: business & ecosystem development, protocol developments, and products & operations.

If FinNexus’ plans to build a tokenized asset platform on XRP Ledger are fulfilled, it will likely be good news for XRP, which is currently the third-largest cryptocurrency by market capitalization. As a result, it may have a positive impact on the performance of Ripple‘s solutions that actively use XRP.

According to Trading View data, XRP is up 20 percent up (at the time of writing) in Year-to-Date performance (YTD) although it is down 11 percent in the last six months and 43 percent in the red in the past one year. 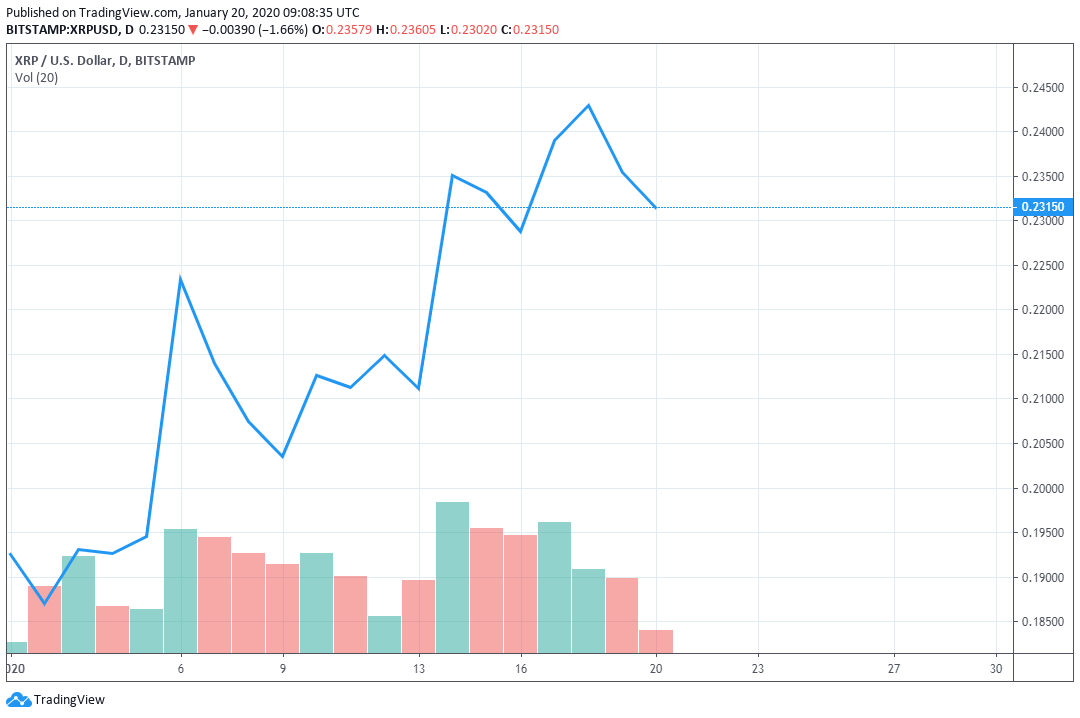 XRP is 20 percent up against the U.S. dollar in year-to-date performance. | Source / Tradingview.com

Per the statement, “2019 was the year of resurgence for the digital assets in general.” 2020, if anything, will be the “banner year for the burgeoning DeFi (Decentralized Finance) sector,” the announcement further said.

Williams is an experienced cryptocurrency writer, whose work has been featured on several financial websites. He loves good laughs, our colorful world, and sharing crypto news with people globally.

Ripple and Montenegro’s Central Bank agreed on developing a pilot project for a national digital currency. However, the specifics of the upcoming project are not yet known.

Press Release XRP (XRP) and Litecoin (LTC) Are Promising Faster Payments but They Both Lack the Interoperability of Snowfall Protocol (SNW) and Its 1000x Profit Potential
By Kseniia Klichova January 25th, 2023

Recently, another news of a clone of XRP, called the RP Classic (XRPC), has grabbed the attention of several investors. Many crypto participants are not aware of the suspicious activities of the XRPC token.