Analysts are certain: investing in BTC mining today shows the most promise. The outcome is guaranteed by the underlying technology not a third party of some kind.

Nowadays lots of crypto analysts are looking forward to the halving event, wondering what it means and how the crypto community will respond to the changes. Mr. Ilya Goldberg, executive partner at ECOS believes: the halving event holds a much more positive change for the crypto environment than you may have initially thought.

So what exactly is a halving event? In layman’s terms, it is when the reward for mining new Bitcoin blocks is cut in half, and it occurs every 210,000 blocks. If we look at history, the original reward amount was set at 50 BTC, but then was cut down to 25 coins, then 12.5 coins — and that’s where it has stayed since. It is planned to be reduced further to 6.25 BTC in May 2020. The operational efficiency of Bitcoin will then increase, its network fees will get cheaper, which in turn will bump up the demand, bringing Bitcoin closer to wider adoption — on a global scale.

The consequences? Lots of mining ASICs will instantly become obsolete and shut down. Running obsolete hardware is simply not profitable.

Obsolete equipment is one that generates so little profit it can’t even cover the power expenses. Bitmain‘s Antminer S9 will become exactly that, and lest we forget, this particular ASIC model constitutes roughly 80% of the mining hardware currently servicing cryptocurrency networks.

What’s going to happen next? Once 80% of mining hardware goes offline for lack of commercial viability, competition among miners will drastically decrease, while new ASIC models will gain tremendously in terms of efficiency (30TH and up, with higher power efficiency). This, in turn, will cause an uptick in price on new ASIC models.

“Here at Ecos we have analyzed the feasibility of new hardware and its projected profitability after the block reward is halved. The conclusion is the following: now is the most opportune time to invest into such ASICs as Bitmain Antminer T17, or other models rated at 38 — 40TH or higher that are perfectly capable of generating enough profit to both cover the power bill and generate a significant profit”, says Ilya Goldberg.

“We have charted the ROI for these miners for various BTC price projections and baseline equipment cost. We learned that the higher the equipment costs, the longer the payback period. We have also factored in the possibility of a situation similar to 2017, when a cascading increase in demand for new generation miners caused scarcity on the market and drove the prices even higher”, added he.

In the past every halving event caused Bitcoin price to grow afterward. Experts agree that the same can be expected in 2020. Let’s add to this the projected drop in difficulty by more than 50% after S9 miners go offline, and we arrive at the conclusion that mining with innovative hardware will remain profitable even if Bitcoin price doesn’t rise (which is unlikely). 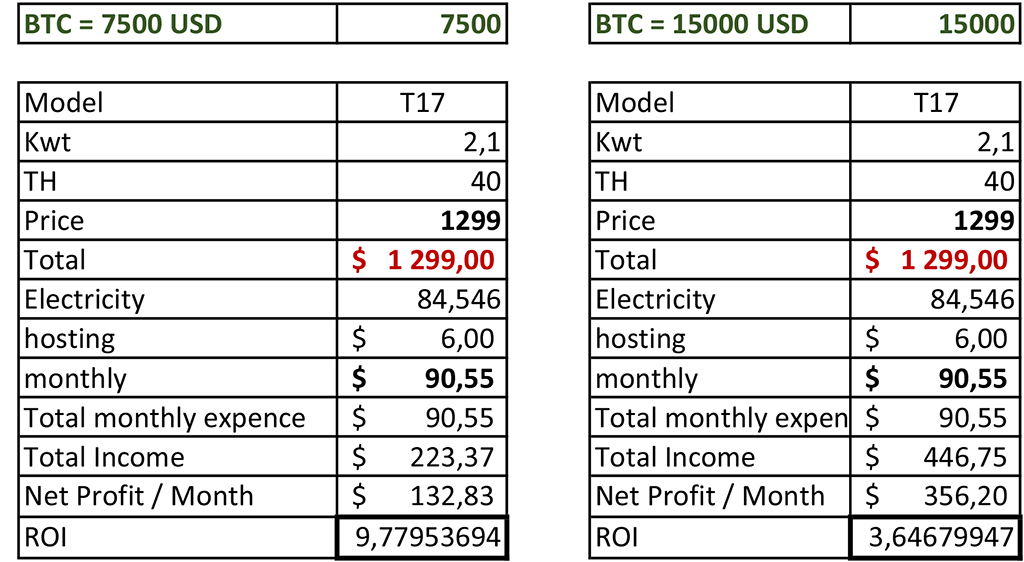 Having calculated all the possible scenarios, ECOS has decided to launch its new service: a quick and easy access to high-performance ASIC miners (Antminer T17, Antminer S17) online, directly from the ECOS warehouse: forget about having to wait for shipping or customs clearance, pay for the ASIC and have the device installed and prepared for running at the ECOS co-hosting facility where it will begin mining Bitcoin straight to your private account the very next day. The ECOS data center is located in Armenia, in the Free Economic Zone established by the Armenian Government, which makes it a reliable, legal and secure location for a business like this.

To learn more about the opportunity, visit the official ECOS website.

Analysts are certain: investing in BTC mining today shows the most promise. The outcome is guaranteed by the underlying technology not a third party of some kind. The key is to jump into the market at the right moment — while the indicators are at their lowest possible levels.

Do you see the opportunity?