The Federal Reserve Chair, Jerome Powell, recently stated that his institution had no intention of banning cryptocurrencies. While this is a positive sign for the regulatory future of cryptocurrencies, we are still in a hazy area.

The world’s entire financial system is in a transitional phase, the likes of which we have never seen before. The last time we broke from monetary tradition was in 1933. On the heels of a bank run lasting months, President Roosevelt issued a Bank Holiday – a moratorium on banks. Moreover, he issued an order for all gold coins, certificates and bullions to be turned over to the Federal Reserve. Why?

Because the US dollar was collateralized (backed) by gold and the government needed a way to increase the money supply to stimulate the economy. Predictably, the price of gold went up by nearly 70%, from $20.67 to $35.00 a year later. Fast-forward to President Nixon unpegging the US dollar from gold in 1971 and all barriers to the money supply collapsed.

If we were to evaluate the USD as a cryptocurrency today, its prospects look quite sketchy, to say the least.

These scam coins are getting crazy. One someone just shilled me:

jk that’s the US dollar

With an unlimited supply comes soaring inflation, which means that those who have the least, have to pay off the debt that the government keeps mounting up. It also means that banks have to keep interest rates low, so that the economy doesn’t overheat. 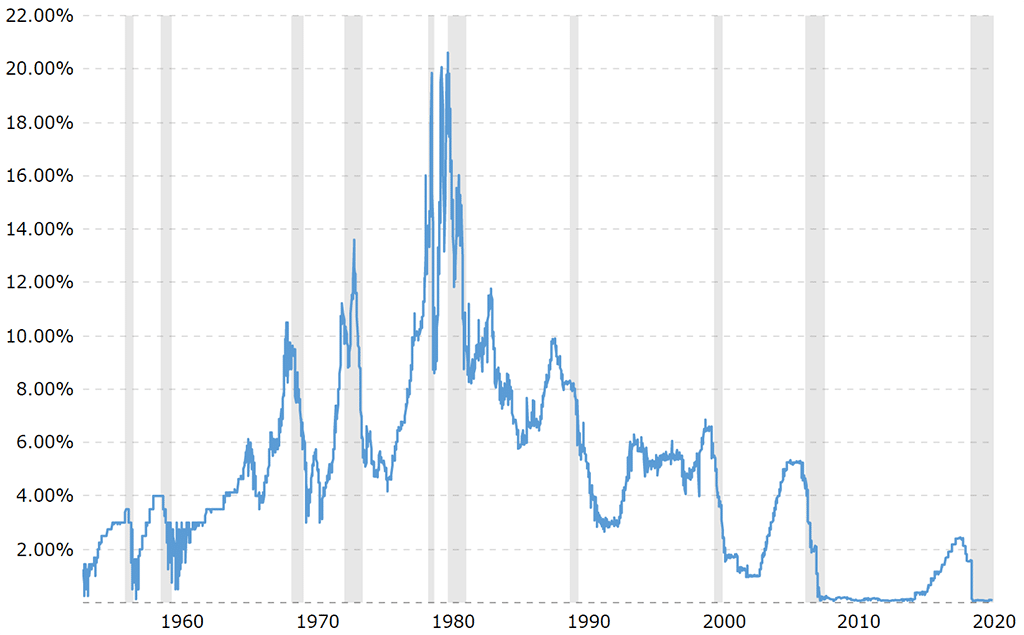 The massive spike you see in the 1980s exceeding 20%, was due to spiraling inflation, rising gas prices, rising wages and government overspending. Sound familiar? The Fed has perfected its USD coin-tweaking since then, but we’re still left with a depreciating dollar and a national average interest rate for savings accounts at 0.06%!

Although the importance of Bitcoin as the first decentralized cryptocurrency cannot be overstated, it is smart contract blockchains that are taking the crypto torch onwards. These blockchains – Ethereum, Binance Smart Chain, Solana, Cardano, Algorand, Avalanche, Cosmos and others – make it possible for the first time to create an alternative financial system outside of the central banking system.

Because smart contracts mimic banking functions for decentralized cryptocurrencies, interest rates are commanded by the free market instead of the will of central bankers. In practice, such an ecosystem looks like this. 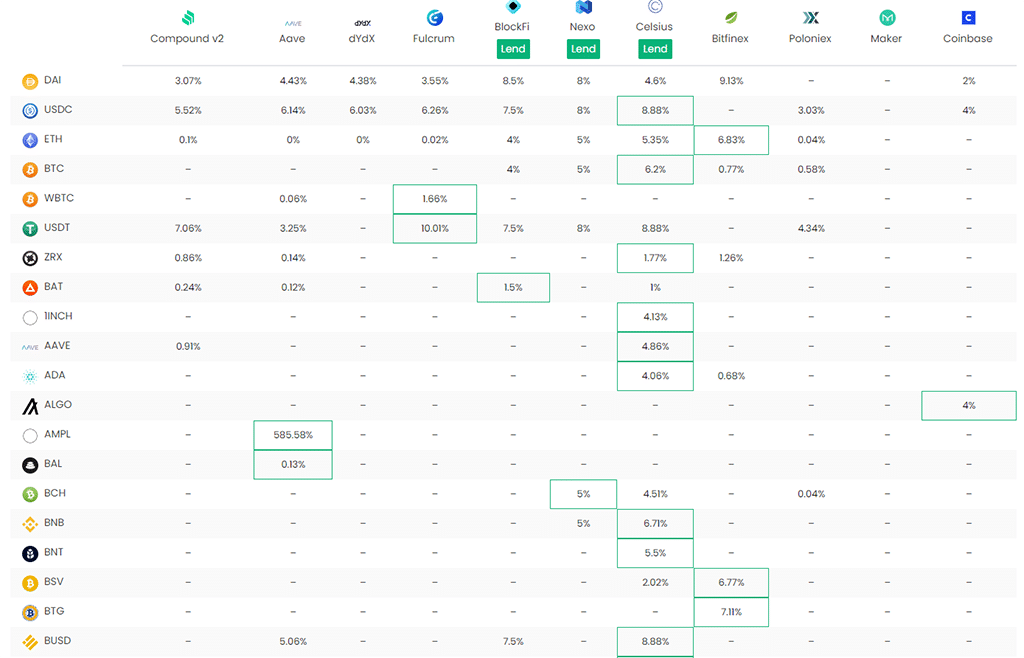 Just as depositing your money in a bank enables that bank to use your money for lending and investing, blockchain smart contracts can make a private bank out of anyone. All one has to do is stake crypto assets in a liquidity pool and become a liquidity provider or as it is more commonly known – a yield farmer.

The key difference is that banks are subservient to the Federal Reserve because they are dependent on its USD supply. This not being the case with decentralized finance (DeFi), the average interest rate is drastically higher – by up to 80 times on average.

Some services offer better rates than others. For instance, the minimum rate with QDeFi is 5.9%, going all the way up to 14.64% APY (annual percentage yield). However, as you can see from the rates table above, the DeFi ecosystem is rather complex with its rich offerings. There are over 6,000 altcoins and thousands of DeFi projects spread across major smart contract platforms.

Gross value locked in smart contract platforms; Ethereum is leading the pack with $83.85 billion worth of crypto tokens. Source: DeBank. Photo: The Block

Investors who are unaccustomed to doing their own research will likely not take advantage of this new asset class – blockchain-powered tokens on the backbone of smart contracts. Yet, the uptake potential depends on certain key factors:

All three factors are powering DeFi’s sails. Consumer prices have reached a 30-year-high, while the PCE (Personal Consumption Expenditure) price index rose 4.3% on last year’s August figures. In the same month, US wages increased by only 0.2%, unable to keep up with rising inflation.

While these negative, if predictable, outcomes of the Fed’s policies rear their ugly heads, crypto adoption is crossing new milestones. According to Chainalysis’ 2021 Global Crypto Adoption report, worldwide crypto adoption has increased by 880%. This puts the banking sector somewhat in a bind.

Faced with near-zero interest rates and soaring crypto adoption, banks are increasingly investing in crypto assets. In March, Bank of America released a report on cryptocurrencies called Bitcoin’s Dirty Little Secrets. In it, BoA noted that smart contract platforms like Ethereum present a greater threat to the traditional monetary system than Bitcoin does.

“DeFi is, we think, the most fundamental challenge to modern finance that we’ve encountered.”

Since this telling proclamation, the banking sector has taken major steps to get its foot in the crypto door. One of the major steps happened thanks to NYDIG – a New York-based investment group specializing in digital assets. As a subsidiary of Stone Ridge, the company partnered with Fidelity National Information Services to prepare hundreds of US banks for Bitcoin trading.

However, outside of fulfilling a custodial role for crypto assets, banks have to grapple with DeFi, their direct competitor. Mark Cuban, billionaire-entrepreneur and owner of Dallas Mavericks recently noted that DeFi lending and borrowing protocols are much more convenient for personal finance than banks are.

Maybe I joined too late. But I disagree. You still need to follow regs to get capital on and off. IMO, the foundational defi benefit is that it simplifies borrowing for personal purposes. It’s a hassle to borrow money from a bank.

As an existential threat, DeFi presents banks with two options – to incorporate DeFi or ignore it. So far, the major financial novelty coming out of the crypto space is Ripple’s XRP cryptocurrency for international payments, which is superior to the existing SWIFT system. Yet, even Santander bank, which is partnered with Ripple, still isn’t using XRP for international payments.

The Federal Reserve Chair, Jerome Powell, recently stated that his institution had no intention of banning cryptocurrencies. While this is a positive sign for the regulatory future of cryptocurrencies, we are still in a hazy area. Gary Gensler, the SEC Chair, signaled several times in the last couple of months that even DeFi protocols like Uniswap will have to be registered with the SEC.

However, after forcing Coinbase to cancel its lending service, it is still not clear which cryptocurrencies/DeFi tokens fall under the definition of ‘securities’, let alone pass the Howey test. While other countries like Switzerland have already regulated the DeFi scene to enough of an extent that they can be included with traditional banks, the United States is lagging behind.

The Coinbase incident is illuminating. It may be the case that the banking sector has too much power over the regulatory sector. Interestingly, Gary Gensler started out his career as a Goldman Sachs banker. Moreover, when a crypto amendment (snuck into the infrastructure bill) was tweaked to be more reasonable, it was Sen. Richard Shelby who thwarted the effort. To no one’s surprise, it transpired that banks had been financing his entire political career.

In the long run, this strategy of canceling and halting is not sustainable because the US will economically suffer, just as Europe did in the first internet wave. Rather, for banks to remain relevant, they should embrace DeFi and work with regulators to find a middle ground; one that offers convenience and security for their clients who are still rather iffy about digital assets.

Coinbase recently saw a dismissal of a class action suit brought against it by three aggrieved customers early last year.