ETH/USD is under pressure regardless of recovering from the intraday low. The main barrier is at the level of $150.00.

Although Microsoft is related to some blockchain companies given the most recent statement, the company, according to all accounts, establishes the fact as Ethereum’s most important corporate advocate. The Seattle-based technology colossus has declared a disconcerting amount of activities on the smart contract platform, using it additionally to democratize AI, to build an Ethereum smart contract confirmation process.

Besides, on the other hand, an effort by China’s administrative organizations to prevent Chinese residents from following Ethereum transactions is affecting the upward dynamic development of the crypto King challenger. While the administration of China hates the association with blockchain and the digital currency continues.

As GreatFire indicates, which maintains a functional summary of sites that are clogged in China, the great explorer Ethereum Etherscan.io has now been hampered by the Great Firewall of China. Easily for crypto users, Etherscan allows customers to view smart contract transactions and addresses in the Ethereum public blockchain. GreatFire says the site has been 100% hampered in China since December 2.

The recent bearish start saw the Ethereum drop to an intraday low of $143.80 before finding support. However, the broader market sentiment has finally weighed down, with Ethereum falling to levels below $145 later. The decline saw Ethereum supported by the important support at $143.33.

At the time of writing, Ethereum was somewhere around 0.60% up at $146.65. The beginning of the day combined saw Ethereum drop from an early morning high of $147.13 to $143.80. Ethereum has left significant untested support and barrier levels today. 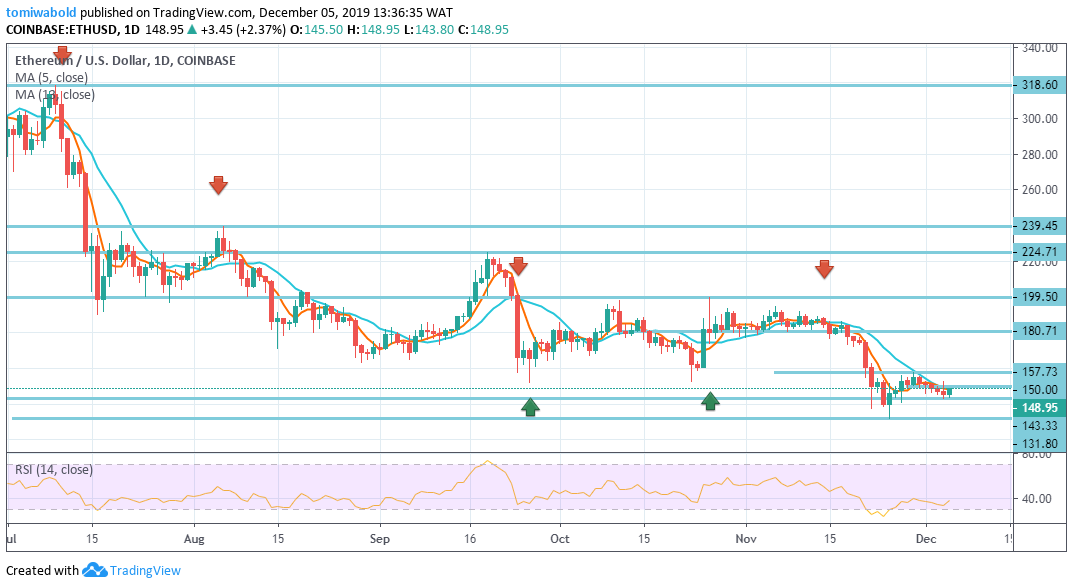 ETH/USD Unable to Hold Prior Earnings Returns Beneath the Level at $150.00

ETH/USD is under pressure regardless of recovering from the intraday low. The main barrier is at the level of $150.00. The ETH/USD is heading below $150.00, retreating from an intraday low of $143.80. Notwithstanding the sharp developments on Wednesday, December 4, and as of early Asian hours on Thursday, the second-largest cryptocurrency remained unchanged on the daily chart.

Meanwhile, on the daily chart, the recovery of the ETH/USD tops a mix of the 5 and 13 moving averages on the daily chart at the $147.00 level. ETH/USD is required to register a reasonable step on this barrier to apply for a par. The next horizontal barrier is expected to be at $150.00, supported by a 5 and 13 daily moving average. When the trend is up, the uptrend is likely to rise with the next focus on the pivot level at $157.73.

Below, the key support is provided by the daily low at $143.33 while immediately off the threatened path, sellers may continue towards the $131.80 level. Despite the fact that the market is currently facing a rally, this may simply be a correction, as both the medium and long-term structure is in a downtrend.

The launch of Bitmain AntMiner E9 comes a year after the announcement. Also, the launch comes just before Ethereum’s move to the Proof-of-Stake blockchain raising doubts over its future sales.