BitPay shares its statistics on Bitcoin industry to show a picture of the state of BItcoin around the world in 2015.

BitPay, a well-known global Bitcoin payment service provider headquartered in Atlanta, Georgia, has recently published a half year report on Bitcoin industry which shows a picture of the state of Bitcoin around the world in 2015.

According to the report, in the final quarter of 2014 and the first two quarters of 2015, the transaction volumes in the European region have rapidly accelerated, reaching an all-time high of 102,221 transactions per quarter (34,074 per month). 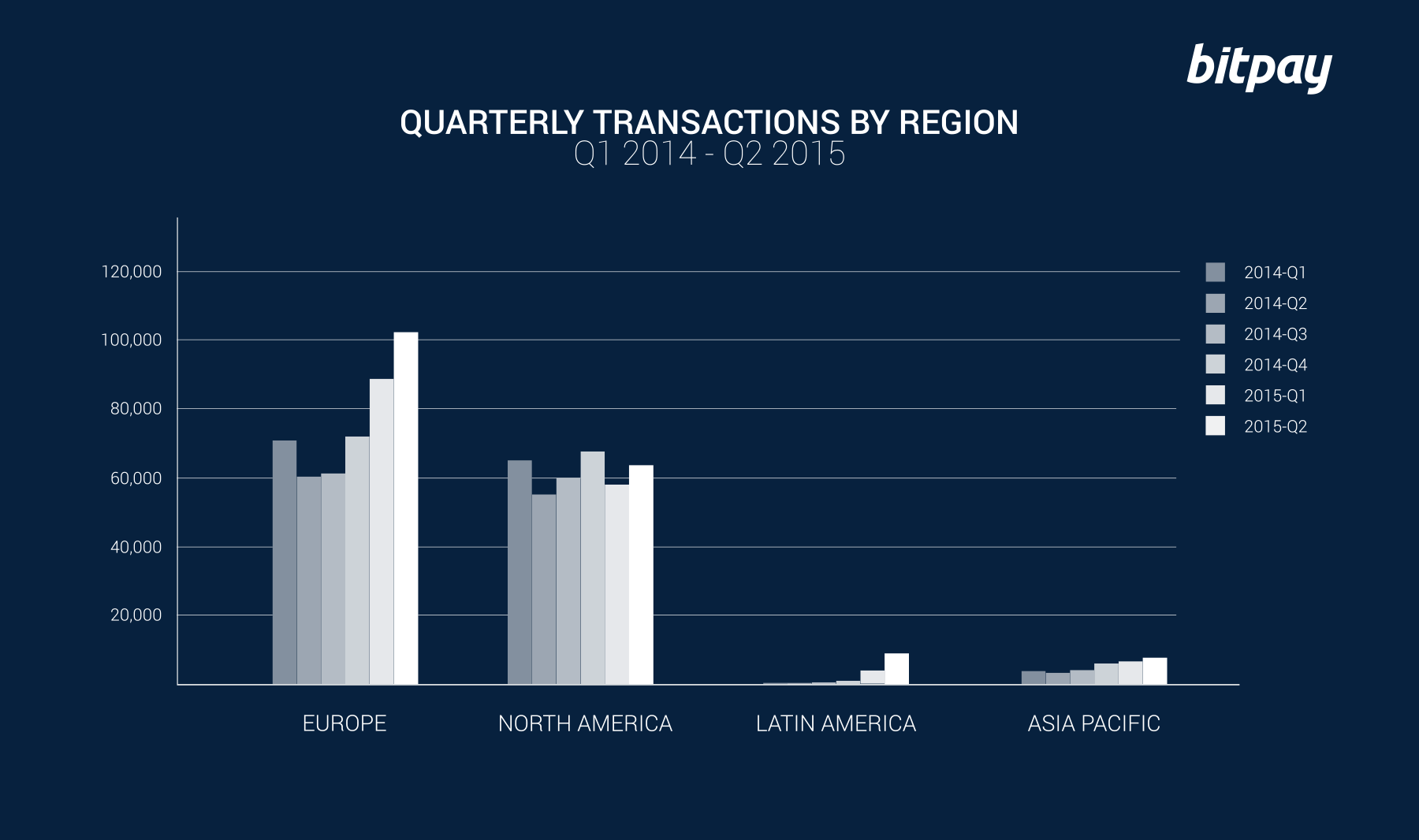 As said by the representatives of BitPay, the rapid increase may be attributed to the ecommerce merchants who are going global in addition to the recent payment service providers the company has partnered with in the region. Traditional payments systems in Europe are still very localized and disarranged throughout the continent.

Bitcoin is a great option for European businesses since it is a truly global payment method which is not country specific. At the moment there are more than 250 local payment methods used in the world. 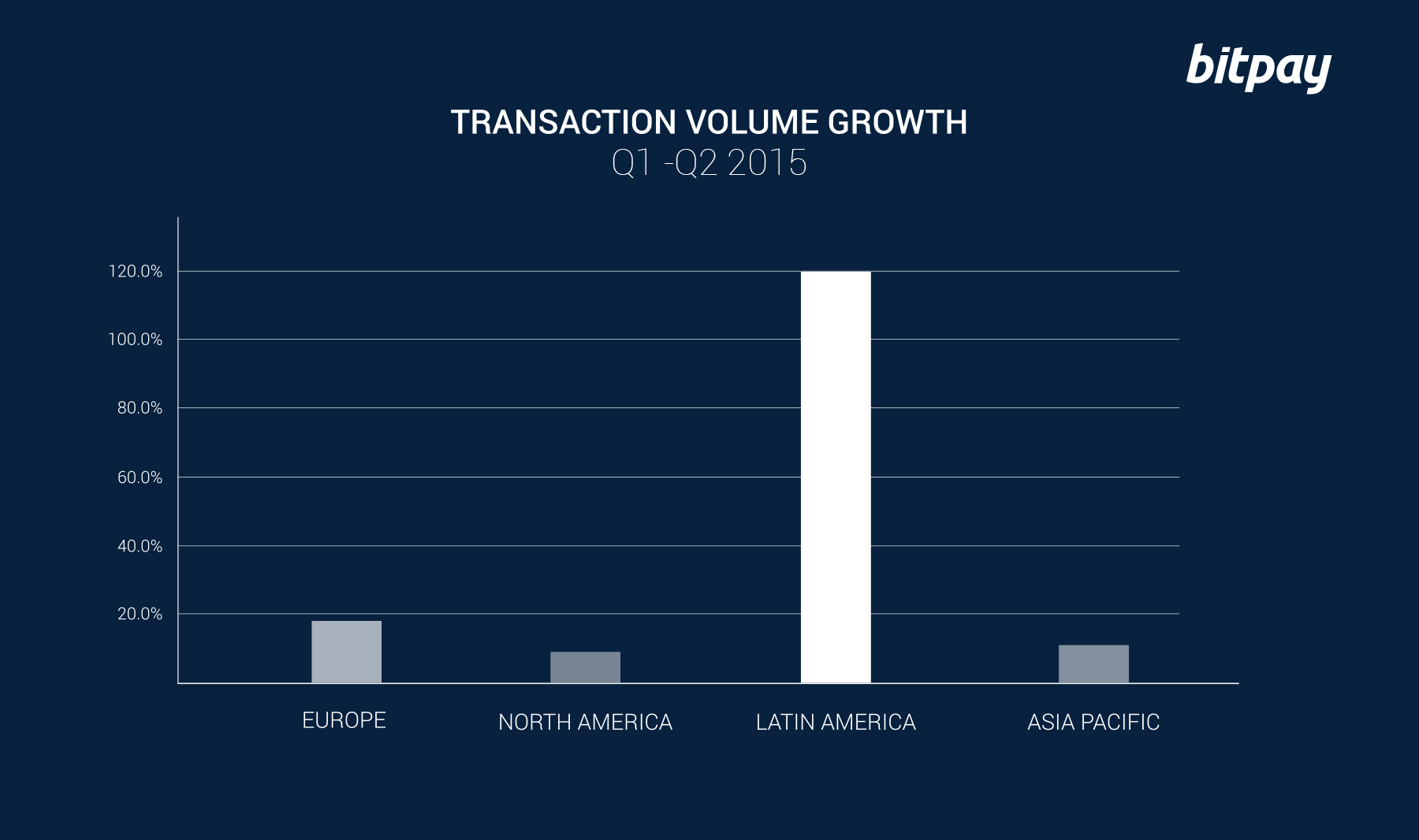 Сoncerning Latin America, the largest percentage increase of transaction volumes by far took place in this region. From February to March 2015, the volume of Bitcoin transactions in Latin America more than tripled. 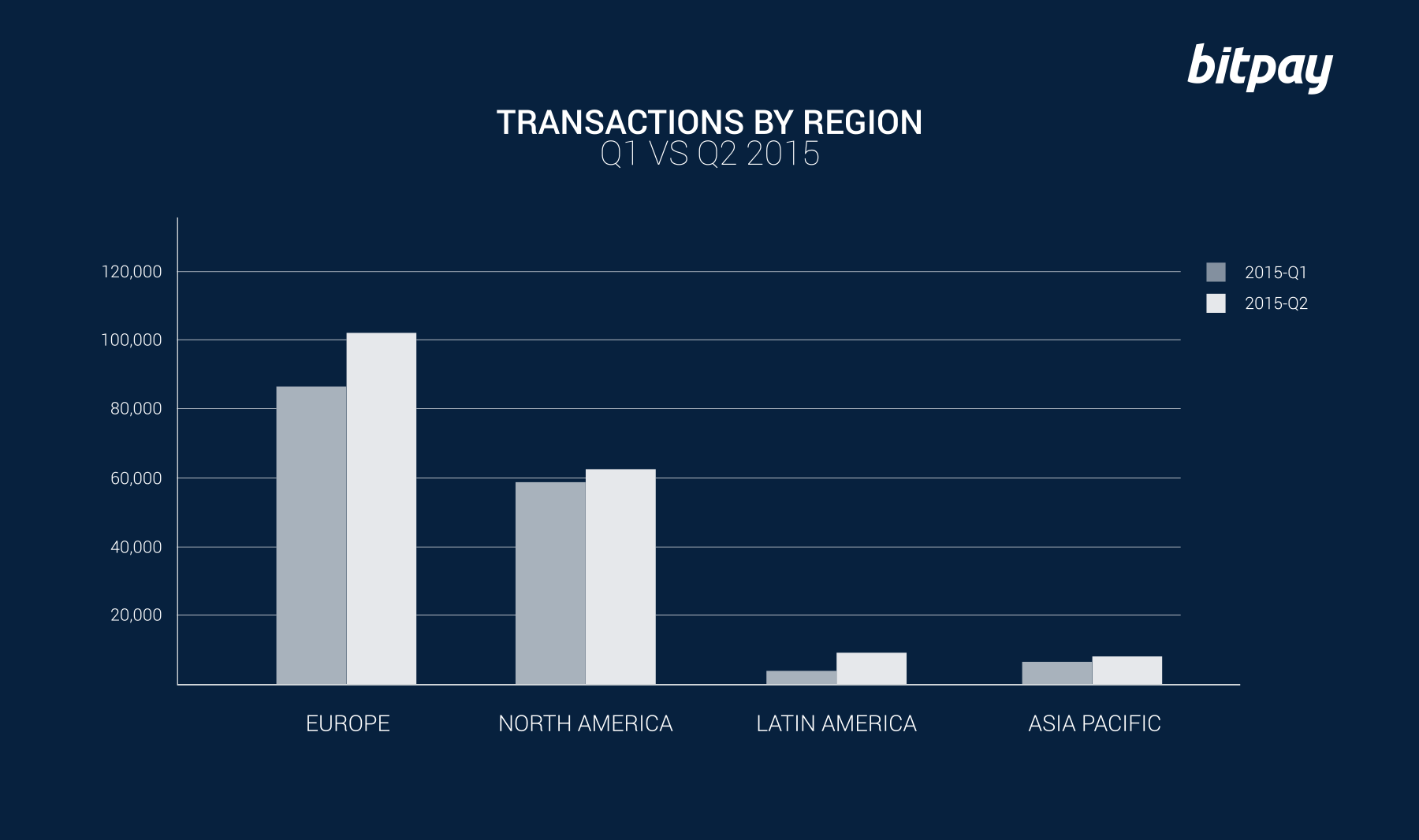 The region is proving to be an incredibly favorable environment for digital currency. A high proportion of the population has little or no access to traditional financial services. Besides, high inflation rates and government restrictions on currency exchange in countries such as Argentina has forced citizens to seek alternatives to their local currencies.

Less than 1/3 of BitPay merchants are now located in the United States, with over 40,000 merchants now accepting Bitcoin payments through the company across 91 other countries worldwide. European region hosts just under 50% of all company’s merchants.

As described in the report, the top industries in terms of Bitcoin acceptance remain remarkably consistent. IT Services, including website hosting, registrars, and VPN services represent over a third of all merchant types. 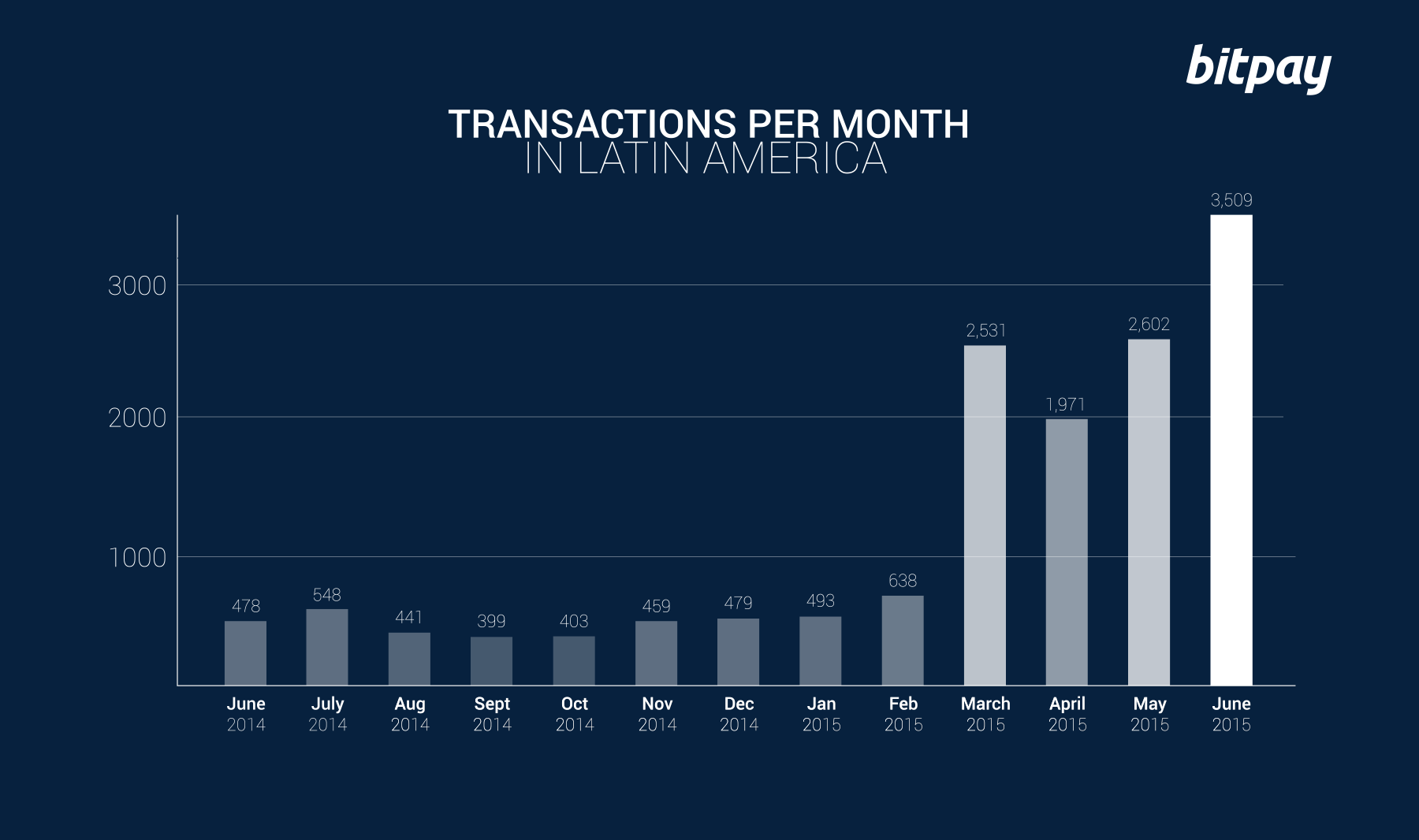 Other merchant types represent 22.9% of all merchants and comprise a broad range of retailers, enabling Bitcoin owners to spend their digital currency on everything from high-end watches to charity donations. Besides, 2-3% of BitPay total transaction volume is spent within the gaming industry.

Financial services represent a growing proportion of the company’s merchants and partners, since the financial services industry continues to realize the potential of Bitcoin to revolutionize their business. 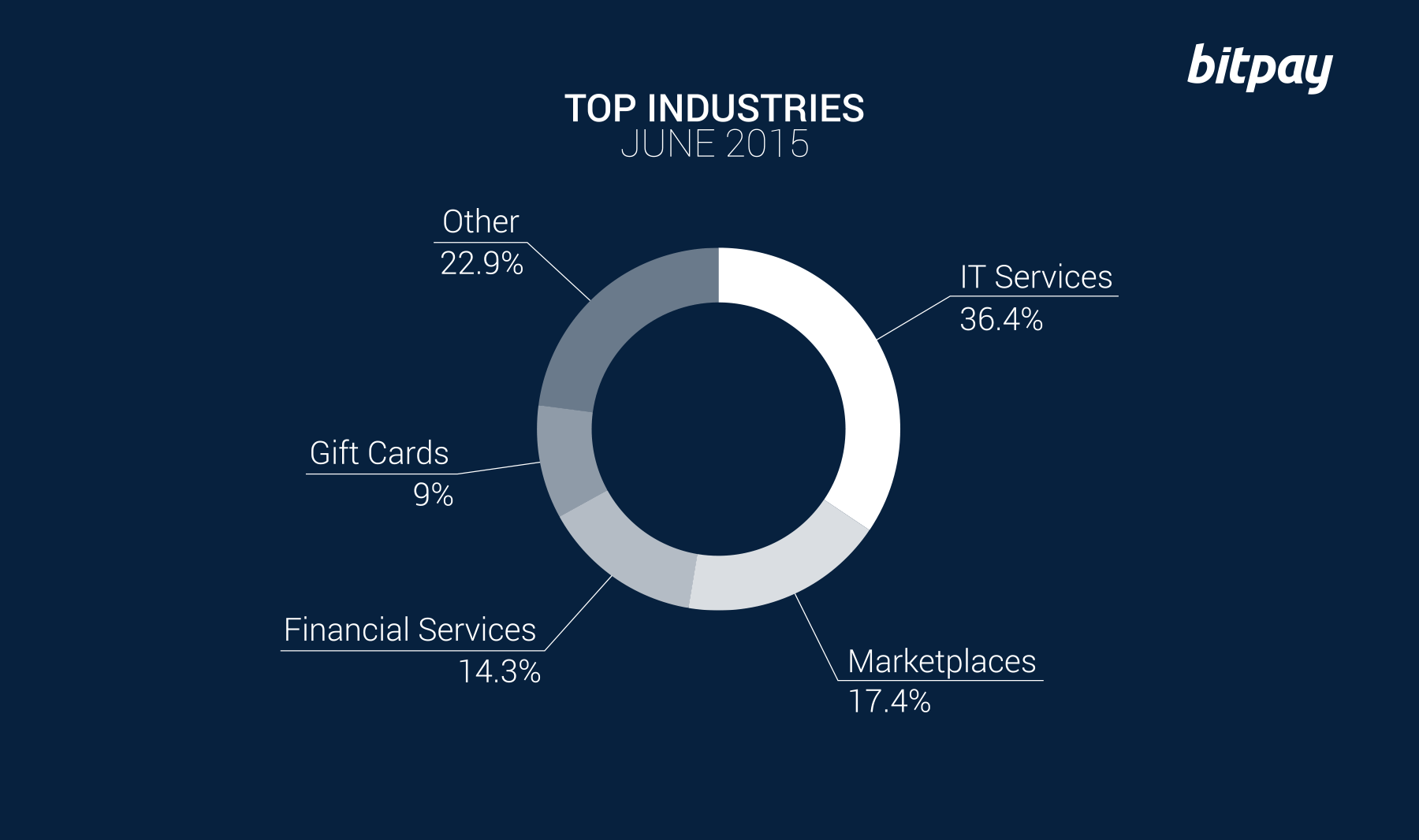 Gift cards is a consistently popular category since shoppers, keen to spend their Bitcoins, often use gift cards as a way of spending the currency with merchants who do not directly accept the digital currency.

When BitPay was founded back in 2011, Bitcoin was in its infancy. It was difficult to convert local currencies into Bitcoin or to find retailers who would accept it as payment. However, in just a few years, so much has changed. Over 100,000 merchants worldwide are now accepting digital currency – and more than 60,000 of those are processing their transactions through BitPay.

BigCommerce is allowing its merchants to expand their payment options and widen their market share.

The latest move has been lauded as a vital one for the ApeCoin project as it will provide it with significant exposure in the mainstream. The digital coin at press time was trading at $7.20, up over 11% in the past 24 hours.

The Wikimedia Foundation, the parent company of Wikipedia has suspended all crypto donations on its platform, in the aftermath of a three-month-long discussion about the fate of the cryptocurrencies on all of the Foundation’s affiliated websites.