In a filing with the U.S. Securities and Exchange Commission (SEC), the company said its platform “supports growth with a variety of value-added services designed to help businesses of all sizes manage their cash flow, invoice clients, pay bills, and reduce the need for merchants to receive and store sensitive customer financial information.”

“A merchant can also integrate with Braintree to begin accepting payments with credit or debit cards, PayPal, Venmo, digital currencies such as Bitcoin, or other payment solutions with a single integration,” it added. 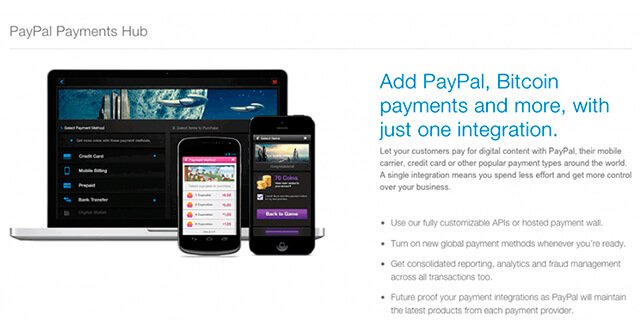 PayPal announced it would accept Bitcoin via integration with Braintree In September last year, and the same month announced partnerships with Coinbase, BitPay and GoCoin. Via the PayPal Payment’s Hub merchants could use customizable APIs to integrate Bitcoin into their shops for digital goods.

“PayPal is playing the role of the intermediary, but the cost will be left up to the merchant and the payment processor,” said Scott Ellison, PayPal’s senior director of competitive intelligence and corporate strategy, at the time of the original announcement.

The SEC filing also said PayPal would split from eBay Inc. at the end of 2015. “As independent companies, we expect eBay and PayPal will be sharper and stronger, and more focused and competitive as leading, standalone companies in their respective markets. eBay and PayPal also will benefit from additional flexibility and agility to pursue new market and partnership opportunities,” the statement said.

PayPal Inc. is forbidden from creating its own marketplace for physical goods, while eBay inc. has promised to steer clear of building a payment processing system.

eBay has agreed to ensure that roughly 80% of gross merchandise sales on its online marketplace are routed through PayPal for the next five years. If PayPal’s share dips below that level, eBay will have to pay its former subsidiary restitution. For its part, PayPal has agreed to pay eBay a commission if its percentage of sales on the marketplace rise above that mark.

eBay CEO John Donahoe, who will leave his post and become chairman of PayPal, said the decision is designed to give both companies flexibility “PayPal is free to pursue any merchant, to pursue an Amazon, an Alibaba,” said Mr. Donahoe said an interview. “And eBay is free to bring other payment alternatives onto eBay.”

The companies joined forces in 2002, when online marketplace eBay acquired PayPal in what became one of the most successful mergers in Silicon Valley history.  However, six months ago, under pressure from activist investor Carl Icahn, eBay said it would spin out PayPal into an independent company. The actual split, billed as a way to unlock shareholder value, is expected to take place later this year.

Crypto exchange Coinbase will handle all the technicalities and will simplify things for users without having them go through the difficulty of staking tokens individually.

Crypto exchange Coinbase is looking to scale up operations outside the US by acquiring more European licenses.