The Random Darknet Shopper, an automated online shopping bot, purchases Ecstasy pills and gets prosecuted for the case.

!Mediengruppe Bitnik, a Swiss art group, has created an automated online shopping bot, named the Random Darknet Shopper, which was programmed to purchase random stuff from Agora, an online marketplace on the dark web where shoppers can buy drugs and other illegal items, using its weekly allowance of $100 in Bitcoin.

According to !Mediengruppe Bitnik website, the art group provides the Random Darknet Shopper with a budget of $100 in Bitcoin per week. Once a week the online bot goes shopping in the deep web where it randomly chooses and purchases one item and has it mailed to the art group. The items are shown in the exhibition The Darknet. From Memes to Onionland at Kunst Halle St. Gallen.

The exhibition receives wide attention from the public and the press. It was well-attended and was discussed in a wide range of local and international press from Saiten to Vice, Arte, Libération, CNN, Forbes.

The Washington Post wrote in January about the work: “There’s just one problem, recently, it bought 10 ecstasy pills.” The robot was purchasing random items from October 2014 until January 2015, when it finally had an encounter with Swiss authorities. 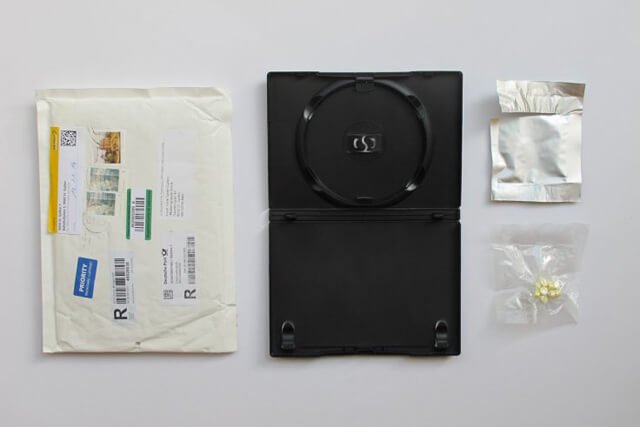 The Ecstasy bought by the Dark Net bot arrived vacuum sealed in aluminium foil and placed in a DVD case to avoid detection if passed through an x-ray scan by the postal service. Photo: !Mediengruppe Bitnik

The Swiss police seized both Random Darknet Shopper and its supply that included a Hungarian passport, Ecstasy pills, fake Diesel jeans, a Sprite can with a hole cut out in order to stash cash, Nike trainers, a baseball cap with a hidden camera, cigarettes and The Lord of the Rings e-book collection.

However, at the close of three months, the Random Darknet Shopper has been released by the Swiss authorities and returned to its owners.

According to the art group’s blog post, the items were kept sealed and untouched except the Ecstasy, which was taken out of its vacuum-sealed packing. It was tested positive for MDMA by the authorities, and then destroyed. Each pill contained 90mg of MDMA.

Besides, the public prosecution asserted that the overweighing interest in the questions raised by the art work Random Darknet Shopper justify the exhibition of the drugs as artefacts, even if the exhibition does hold a small risk of endangerment of third parties through the drugs exhibited.

According to CNBC, Thomas Hansjakob, a spokesperson for the Swiss St Gallen police, explained the situation: “We decided the Ecstasy that is in this presentation was safe and nobody could take it away. Bitnik never intended to sell it or consume it so we didn’t punish them.”

Should Andresen’s prediction materialize in 40 years, Bitcoin will have gained approximately 13,636.36%.

A cybersecurity firm Under the Breach reported that Ethereum forum hacker is now selling the databases of Trezor, Ledger, and BnkToTheFuture. However, Trezor and Ledger claim that their systems are secure but have taken the matter seriously.