At March 7th, 19:00, Mr. Wu Shenjun, founder and founding chairman of GSR Ventures and Board Chairman of GoldenSand Capital, announced to the public in a live stream on the three-eyed frog platform that the GSR Matrix Fund will provide an additional US$10 million to IPSE.

GSR Matrix Fund: The Strategic Layout of GSR System in the Forefront of the Global Digital Economy

Mr. Wu, founder and founding chairman of GSR Ventures and Board Chairman of GoldenSand Capital, is a well-known figure in the global investment community. He was born in mainland China and lived in Canada, and studied at the Top universities such as UC Berkeley and MIT. Mr. Wu has great experience in the telecommunications industry, and he is quite interested in scientific and technological innovation.

In addition, he is optimistic about the development potential of high-tech areas in mainland China. So in 2004, he founded GSR Ventures mainly investing in enterprises in the field of scientific and technological innovation in mainland China, and its achievements were outstanding.

Under Mr. Wu’s leadership, many of the companies invested have successfully grown into unicorns such as Qunar.com, bringing high returns to investors. In 2016, GoldenSand Capital was established, and the GSR System began to face the global market, with more layout in the field of virtual banking and digital asset trading.

At the end of 2019, in order to better lay out investments in the digital economy, GoldenSand Capital invited two Blockchain experts, Mr. Liang Jieyang, founding chairman of the Blockchain Association of Hong Kong, and Mr. Xu Ander, founding chairman of the Global Blockchain Investment Alliance, to join and they jointly launched a special fund, the GSR Matrix Fund, to focus on investing in next-generation information technology, such as AI, Blockchain, Cloud computing, Big Data, and IoT (ABCDI). Projects currently invested include GoldenSand Bank, GlobalSTOx Securities Exchange, and Blockchain Infrastructure and Applied Distributed Search, the IPSE. 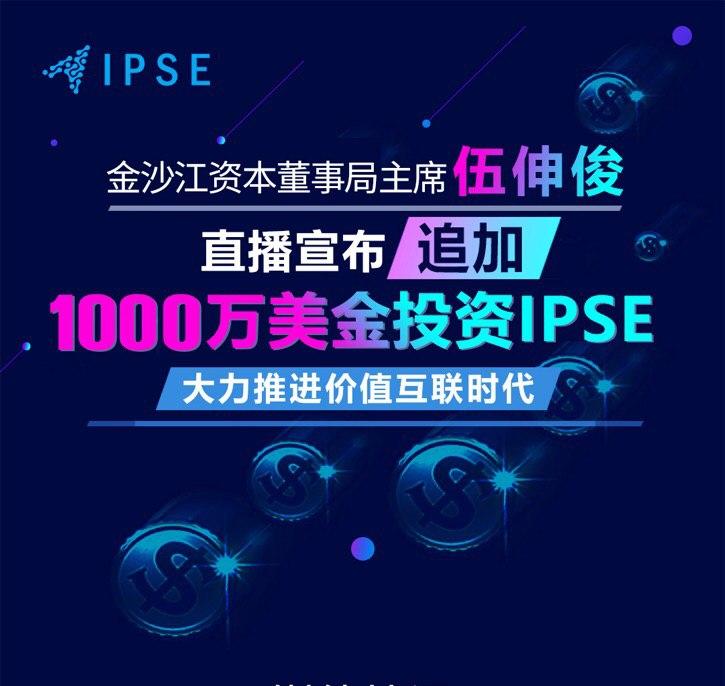 The GSR Matrix Fund investing an additional US$10 million to IPSE once again attracted the attention of global information industry and investment community. In response to the logic of this additional investment, Wu said in the live stream,

IPFS is a revolutionary, innovative and disruptive global data industry fundamental protocol in the distributed data age. Owing to advantages of being efficient, fast, high security, and saving resources, IPFS will gradually replace HTTP protocols that has great pains in access, storage, security, and privacy in the era of big data.

It can be said that IPFS has elevated the Web to a new level and is a powerful infrastructure for the next generation of value Internet. IPFS has a revolutionary influence in technology, but the incomprehensible nature of its data label, the hash value, seriously hinders the application of IPFS.

IPSE presents the contents of IPFS in a human-understandable way, which lays a solid foundation for IPSE to occupy the next generation of value Internet portal, and brings IPFS to the industry application.

Technically, IPFS maps content to a hash address, IPSE maps the hash address to a semantic label that is understood by humans, and users only need indexing the label to find the content. Users share content resource and add tags to complete mining, and then get POST token incentives. Super-nodes can scale out to store index data and provide a stable search service.

IPSE provides a fast access to storage content based on the IPFS network, while establishing a reward mechanism for users to share data and storage space, and IPSE will use the PoST (Proof of Storage True) algorithm to ensure the efficient storage and utilization of data.

At the same time, in the future IPSE main chain will adopt the DPoS consensus mechanism of 21 super-nodes to ensure the efficient operation and reliability of the consensus network.

The era of the Internet is the era of “user is king” and “flow is king”. Flow has become an important asset, whether in the information Internet era or value Internet era. As the gateway of the value Internet era, IPSE has natural value advantages and great value potential compared with other projects.

It has world-class ability and resources in technology, applications, products, ecology, economy, politics, business and other fields. Team members complement each other’s abilities, and under the development model of co-construction and sharing, IPSE ecological super chemical reaction is also stimulated.

Since its launch in 2018, IPSE has implemented two iterations of its products and is in the process of continuously improving its ecology.

With IPSE as the portal, many applications form the IPSE distributed search ecosystem. Based on the copyright of IPSE network and paid content storage, they reduce storage and bandwidth costs, while directly distribute through IPSE to all users, and build a strong IPFS+IPSE ecosystem.

On the topic of investment philosophy and expectations for the future of IPSE, Mr. Wu said that it is important to invest in leading the trend, trial and error, and risk-taking. With the advent of 5G commercial era, the full promotion and application of distributed storage will not be a problem.

At this point, you need to find the pinnacle of technology and the international leadership team like Silver Xie and then bet. A new generation of network must be multi-dimensional development, whether it is search or storage. GSR Matrix Fund looks forward to the team can make technology to achieve the gradual landing of ecological applications, really occupy the gateway of next generation of value Internet, and promote the development of the digital economy frontier.