Add.xyz relaunched in September 2020 as the first full-stack defi platform aggregating Lending, Insurance, Privacy, Governance and Staking into one platform for ease of use for users.

For the first time, we will be implementing yield farming, in what would probably be the first real yield farming based product with a real use-case – Privacy. We have taken the first steps by designing a lending platform whereby users can use the bl3nd3r privacy anonymizer at the deposit or withdrawal stage of lending, or whereby users can simply stake their liquidity into the privacy mixer and earn yield. 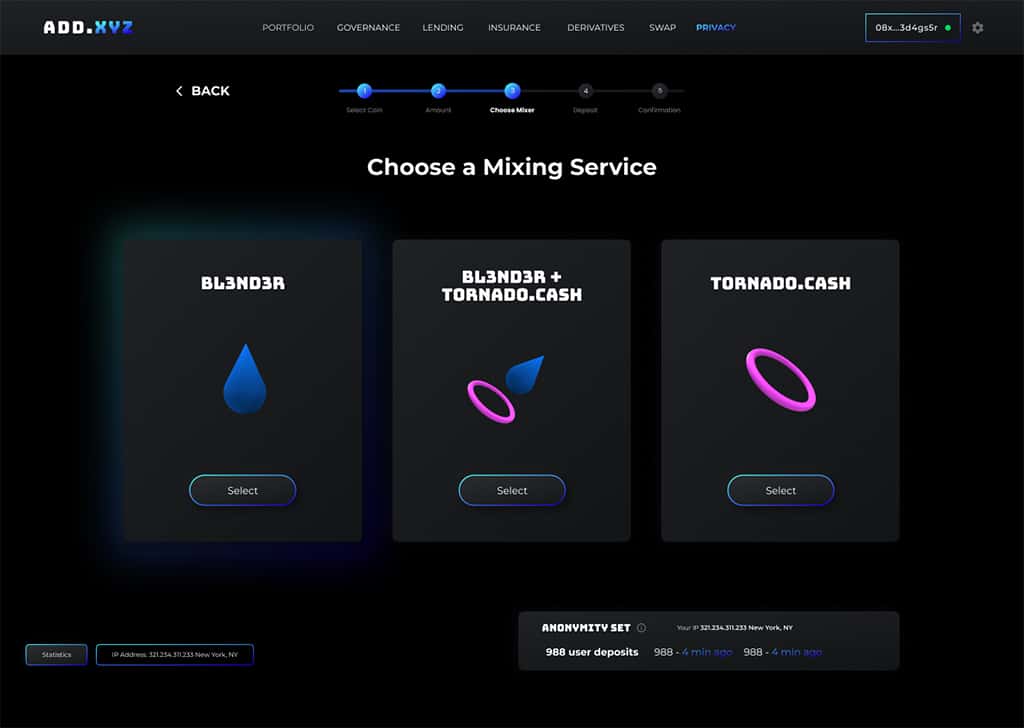 Yield Farmers can interact and gain yield, by staking their liquidity within the privacy mixer itself. This is a revolutionary way of using yield farming to support the entire blockchain space mutually, by allowing users to mix their liquidity together in order to gain anonymity. We anticipate that by integrating yield farming into privacy mixers, the liquidity within mixers could rapidly increase far beyond the normal levels of liquidity seen in mixers over the past few years.

Alongside our own native privacy mixers, users of Add.xyz will also be able to choose between Bl3nd3r or Tornado Cash’s privacy mixer, and in the future mix between both services, increasing anonymity and the anonymity set; we are still working this one out. Add.xyz will be launching Bl3nd3r with ETH and DAI pools enabled.

The battle for privacy is heating up as regulators across the world highlight and target centralized exchanges with inadequate AML policies around the world. At the same time, traditional financial institutions and corrupt governments across the world continue to increase the implementation of legislation to erode the rights of individuals and their privacy, allowing for governments to snoop on private communications such as the snoopers charter and blanket mass surveillance.

Many DeFi projects have taken steps towards centralization by working hand in hand financial regulators to gain licences and align themselves with old practices. As regulators begin to understand the blockchain space in more depth, user privacy is becoming pivotal.

Several U.S. government agencies have already announced grants in the millions of dollars to crack and reveal the identity of users of entire privacy encryption-based blockchains like Dash and Monero. As Vitalik points out, privacy is important and should one day be a modular option for users interacting with the Ethereum blockchain, and no doubt with the adoption of this feature, regulators will target any Ethereum-based privacy protocols deployed.

We believe that self-executing code is what it says it is, and should not be vulnerable to interference and manipulation, even from its creators. That’s why we have launched a new ERC-20 based privacy mixer using ZKsnarks encryption, which is self-execution and has no centralized backdoor even by the creators once it has been audited and is stable.

Our journey begins by aiming to launch the blockchain space’s first privacy-based lending protocol, whereby privacy by design is held as the foremost principle in architecting multiple money market protocols that are aimed at ensuring user privacy.

We have taken the first steps by designing a lending platform whereby users can use the bl3nd3r privacy anonymizer at the deposit or withdrawal stage of lending, as a halfway solution and testing ground for a total privacy-based lending protocol.

Most, if not all protocols are moving towards the direction of revealing user identities, in fact many already harvest user data and sell this off. We’ve always known that off-chain and on-chain privacy solutions will fall short of a completed anonymous privacy protocol. While these things take time, we are pulling together the architecture, team and experience to deploy something incredibly special into space.

There has been considerable disruption caused by the likes of Apple and Google who are forcing not just some of the largest game creators and developers on mobile into forcing the way they operate, but also companies like Coinbase for example are under pressure.

In the latest comments by Coinbase’s CEO, Brian Armstrong, states that Apple is limiting the cryptocurrency firm’s functionality and features. Many of the leading blockchain software companies with mobile apps are also afraid of speaking out in fear of retaliation.

Brian Armstrong’s comments go further into showing the political nature of Apple’s hostility towards crypto as they have specifically censored Coinbase’s Earn feature, stopping users from accruing APY through lending.

There are considerable threats to traditional finance from monopolies within banking who will put pressure on companies like Apple and Google not to allow additional rails and increase access to mainstream consumers to earn money.

According to a blog post by the firm, Quasar will use the majority part of the fund for product development.

Crypto exchange Coinbase plunged to a $32.65 all-time low as the S&P 500 and the Nasdaq Composite also slipped up.

As the DeFi ecosystem tends toward maturity, the combined activities in this unique offshoot of blockchain technology rake in as much as $8.2 billion in fees.