Cryptocurrency market looks very optimistic amid statements from the FED Chair Mr. Powell on the development of the Digital Dollar. After yet another Red day experienced on Monday, February 22, Bitcoin and altcoins seem to retrace from their new dips and recover losses.

While some leave the market with a pessimistic pulsebeat, others find new opportunities and claim that the crash was normal and the World should buckle up for the new bullish cycle. As the bullish cycle is already knocking on our doors, I’d like to point out three altcoins you should trace now to find the best opportunity.

Wanchain has made important announcements recently in it’s DeFi scope. The launch of WanFarm, XRP integration and a roll-out of the BTC/ETH bridge on the mainnet are only a few to say. Wanchain has developed a full-range DeFi ecosystem within it’s chain offering staking on Storeman Node, on WanSwap and compounding on Wanchain’s compounding DApp WanLend. The mainnet will undergo an important Cross-chain upgrade tomorrow, February 25, upgrading to the Universal Multi-chain Bridges with Shared Staking Assets (for short, Multi-chain Bridges).

As for the technical analysis, there is an important note, I’d like to make on WAN/USD. The correction, which started after the token hit ATH against the US Dollar at $1.2500 on February 19, ended at Fibonacci 0.618 level at a price of $0.618, you don’t see that happen often in the markets and this is the first time I see that happen.

The pair is currently testing an important resistance of $0.8250, the pair might slow it’s bullish run at this point a bit, retrace, and continue the bullish run after breaking above the $0.8250 resistance. There will be a very strong test of the bullish continuation for WAN/USD at $0.900-$0.944 levels as there are several resistances and EMA50 is based there. However if the strong impulse persists, WAN/USD will hit $1.15 once again and more likely will set a new high.

Kava blockchain, the world’s first cross-chain lending platform has evolved rapidly after the official launch of the platform almost a year ago receiving a $750K investment from the Framework Ventures, the same fund that invested in Aave, Chainlink, Synthetix, Yearn Finance.

The project is yet to experience another giant upgrade this March, transitioning to the Kava 5. KAVA Labs, which is a developer company of Kava, on February 23 announced that their Kava 5 public testnet launch was successful and that the full rollout is scheduled for March 4. After the launch of Kava 5, devs will be preparing for Kava 6 which includes upgrades such as the creation of the AMM (autonomous market maker), AMM token distribution, Kava staking derivative and Risk management optimizations. In general, KAVA is a great long-term investment opportunity, the project has grown rapidly and received an investment from the investors of Chainlink, the product seems to be operating seamlessly and KAVA partners with companies from crypto-space to expand their offerings.

As per technical review, KAVA/USD is preparing for a bullish marathon when the pair confirms the breakout from the dynamic resistance.

The correction ended below the Fibonacci 0.618 level. Currently the price is stuck between the support and resistance levels of the February 04 – 06 cycle. As this cycle suggests, if KAVA/USD breaks above $3.8290, it will continue the uptrend to face resistances at $4.31 and $5.22 above that.

Elon Musk, the Destroyer of the shorts and longs, yet in one of his Tweets on February 20 said that he purchased the Antiminer L3+ which is the best ASIC miner for Litecoin.

Despite the Tweet, LTC/USD continued to plummet to reach $159.29, below the Fibo 0.618. There were no significant updates from Litecoin, however the token remains highly attractive to investors and traders for it’s volatility. 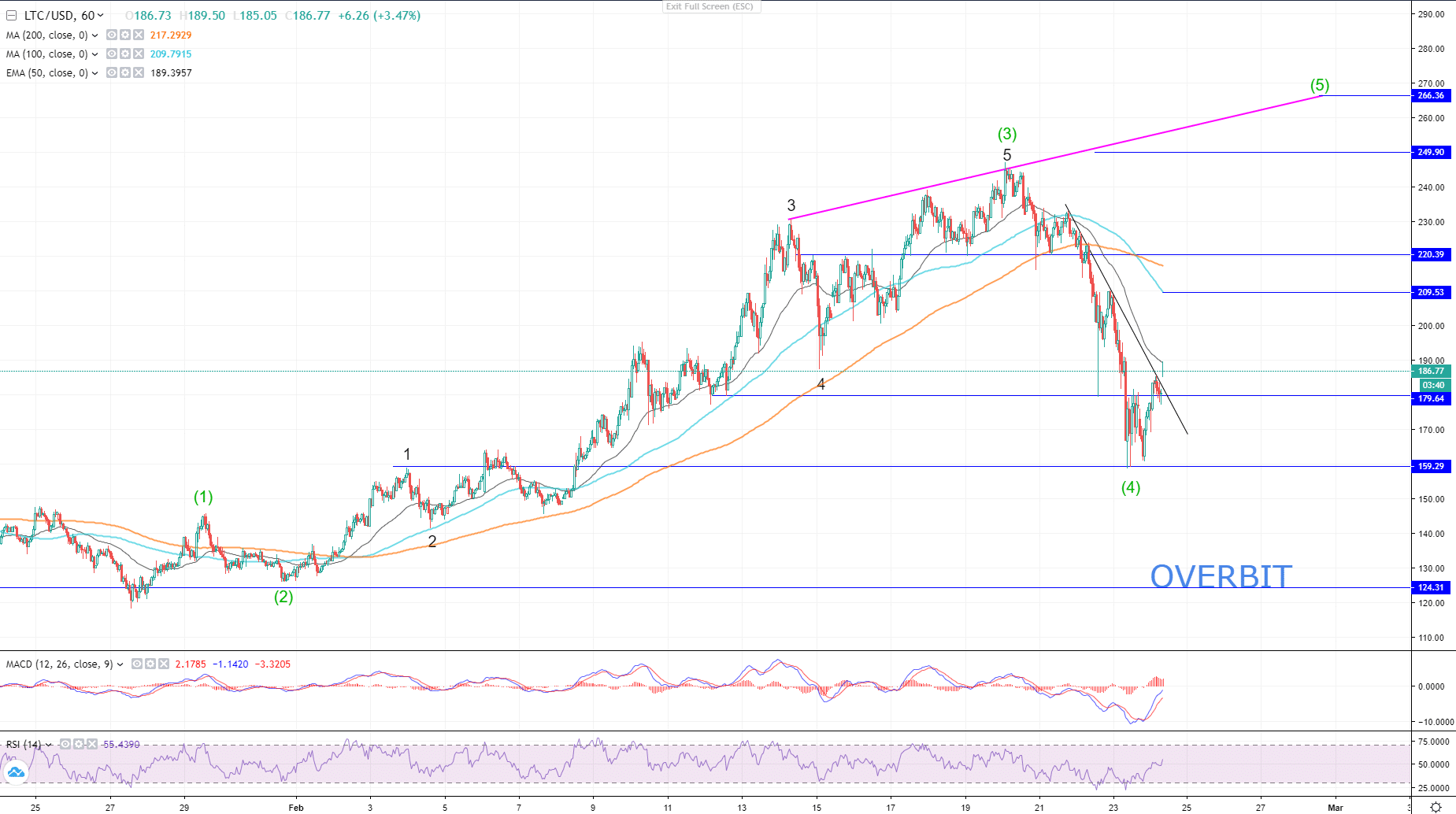 According to the Elliott Wave theory, Litecoin has completed the Wave 4 of the Intermediate cycle and is now forming a Wave 5. However, at the first glance, it seems like the corrective 4-th wave of the primary cycle has a 5-wave formation and the current Wave 4 could be Wave A of the three-wave corrective pattern, and a completion of the Wave 4 can be at levels near the first wave of the cycle, between $145 and $154. If that is the case, then LTC/USD should climb towards $209 and $220 to complete the Wave B of the 3-wave correction pattern, the further price action of LTC/USD near the $220 level will signal the trend continuation. By the time of writing this article, Litecoin on Overbit is traded at $186.77, breaking out from the dynamic resistance of the downtrend. There is a high chance that Litecoin will jump to $204 and $220 above that after a retest of this dynamic resistance as support near $180.

Subscribe to our telegram channel. Join
Related Articles
Press Release XRP (XRP) and Litecoin (LTC) Are Promising Faster Payments but They Both Lack the Interoperability of Snowfall Protocol (SNW) and Its 1000x Profit Potential
By Kseniia Klichova January 25th, 2023

Press Release BNB (BNB) and Kava (KAVA) Struggle to Compete Against Snowfall Protocol (SNW) as It Approaches Launch Date on February 3rd – Find Out Why!
By Kseniia Klichova January 24th, 2023

Interoperability between blockchains and their respective tokens is one of the most critical challenges that blockchain protocols and applications face.

With burnout in reserve cash, and the growing prices of Bitcoin and other related assets, most mining firms are indeed left with no options but to intensify their efforts to get their hands on more BTC from their farms.