Whatever direction investors go in this week – bullish or bearish – they should remember it may get choppy at sea as bitcoin’s price skates on ice.

A giant wobble Sunday in the price of bitcoin, caused by unusual trading activity on Shanghai-based exchange Lake BTC in the Asian evening, promises a period of heavy volatility for the asset after what has been a drab two weeks of trading.

Monday morning, bitcoin was trading at around $350, convincingly higher than the 18-month CoinDesk Bitcoin Price Index (BPI) average purchase price of $337.61, but still 9.5% shy of its one-week high reached last Tuesday of $386.94.

(BNC is widely-considered by professional investors to be the most accurate measure of bitcoin’s price since BNC’s proprietary index tabulates over 50 exchanges and more than $150 million in daily trading volumes, across more than 160 FIAT currencies.)

The majority of market activity still remains bearish after what has marked bitcoin’s worst-performing 6-month performance so far, with the currency off 16.7% for the period. However, trading platform and exchange managers are increasingly optimistic about the forecast going forward, since volumes are beginning to thin out and there is little sign of the massive selling pressure that was indicative of trading in September.

“I think [the price] will pop up because everyone will close their shorts at that 338 ish mark,” said Adam O’Brien, CEO of leveraged trading provider BTC Solutions, which offers speculators loans of up to 8 times their principle investment in order to help magnify trading returns. “If we see the nice reversal I think we are in now staying constant, then it will hit 500 before Halloween,” added O’Brien.

About 60% of BTC Solution’s customers are currently long, which is lower than the Canadian trading provider’s average customer long positions of 75%. 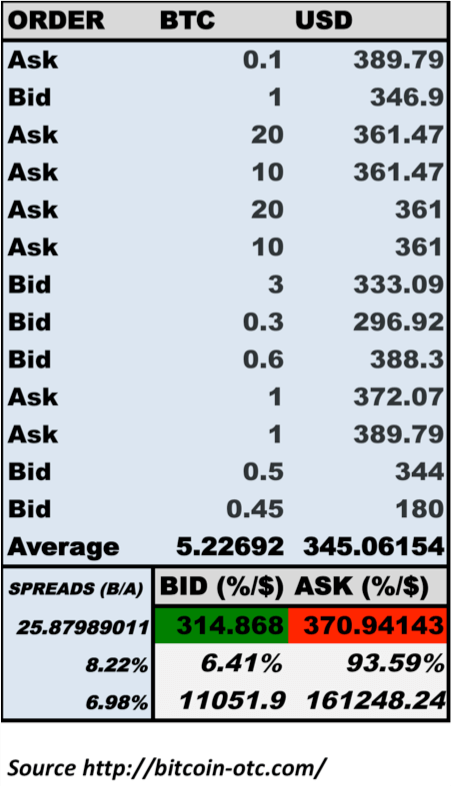 In over-the-counter (OTC) trading activity, the majority of the activity was towards the sell-side, too. According to data provided by online OTC bulletin board bitcoin-otc.com, 93.6% of all traders were sellers while only 6.41% were buyers.

Volumes were thin, at a little under $200,000 of net orders – roughly 570 bitcoin – being represented on the OTCBB Monday morning. Spreads were also tight, at 8.22% on the ask and 7% on the bid. In general, a spread of less than 10% on both bid and ask orders in the price of bitcoin is considered an indicator of positive momentum.

Investors in bitcoin should expect much more volatility to come now that trading volumes are lighter, since any relatively smaller amount of buying or selling has a much more dramatic effect on the price movement.

Not all traders were so convinced of a near-term price surge, however. Trading analysis service BITC0IN announced Monday morning that one investor with a position of 22,600 bitcoin ($7.92 million) was afraid about the technical outlook for the currency. “I’m getting out,” the service quoted the investor as saying. 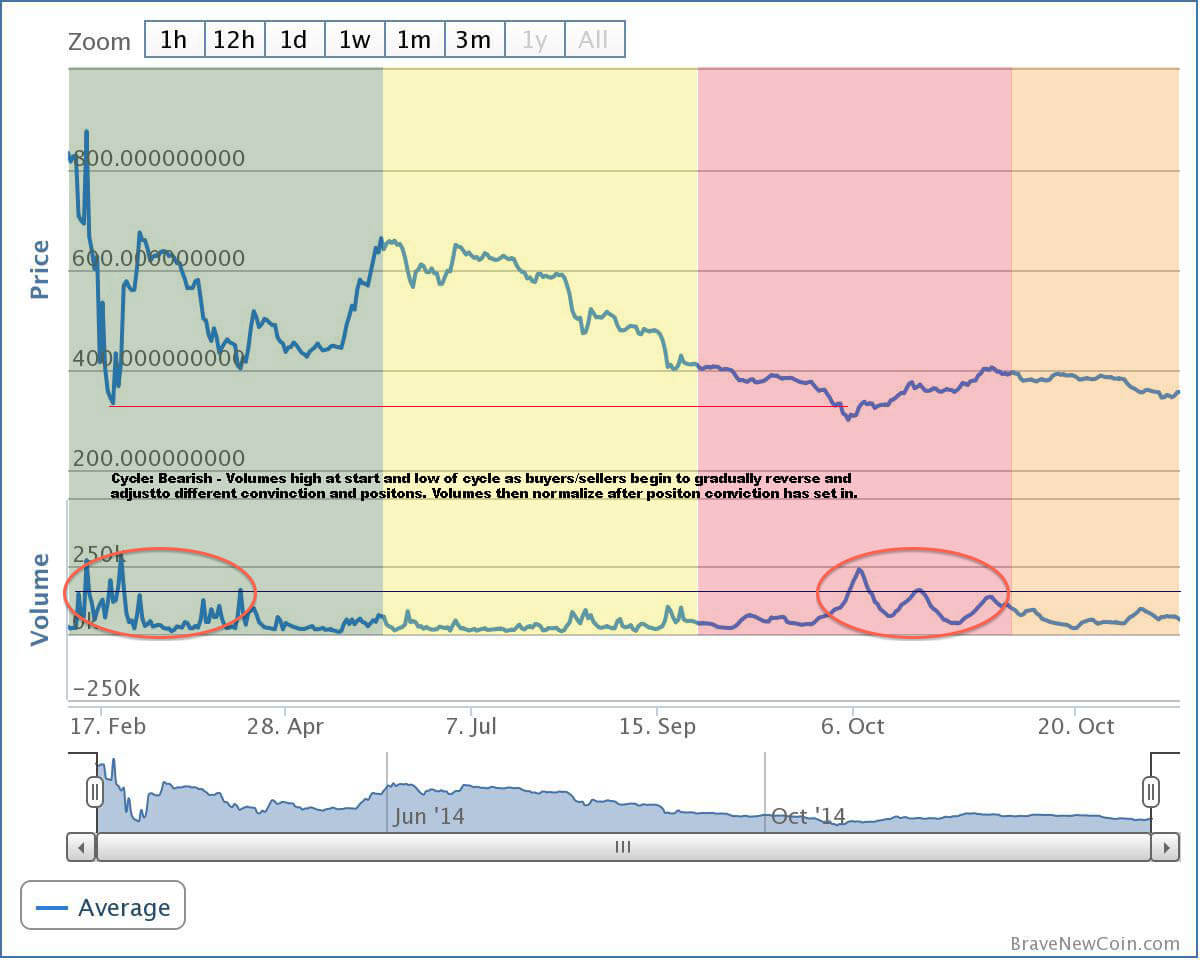 Data provided by BNC for the year-to-date period (above) indicates that a new point of price instability is getting underway to pave the way for the upward price movement that investors expect to come around going into winter. As the price of bitcoin settles into a new direction, volumes slacken off while markets become much more choppy. The current period’s trading  is comparable to late February, according to BNC.

BNC’s chief executive Fran Strajnar is bullish on the long-term outlook for bitcoin and its related altcoin cousins, which he describes as a segment growing “exponentially.”

“Volumes are strong consistently in China on a day to day basis,” Strajnar said. He points out that no bitcoin price indexes apart from BNC’s capture the numbers derived from Chinese exchanges, even though they represent some 75% of the market.

As to the question of whether trading volumes in China are being manipulated, a recent source of anxiety among some market-watchers, Strajnar maintains that they are genuine.

“Some of these exchanges may front-run their orders, but then so does the New York Stock Exchange,” Strajnar added.

Editor’s Note: If you like this article, go and read our analysis of two altcoins that might pop along with bitcoin! On the other hand, if you are tired of bitcoin, check out our staff writer Polina Chernykh’s preview of Jeffrey Robinson’s dire forecast for the virtual currency (but not the blockchain, mind you). Thanks for reading – we hope you keep coming back!

Grayscale CEO has been pressing hard for the SEC to approve its spot Bitcoin ETF application. If the SEC decided otherwise, Grayscale is ready to take up a legal battle with the securities regulator.