Parkt, the app for compensating parking fees, has integrated bitcoin into its platform.

US-based startup, called Parkt, has announced it added bitcoin into its new parking validation platform. Besides, the company is going to allow its customers paying with the use of virtual currency in the near future. The users of the mobile app will be able to receive the digital currency from businesses that are involved in the system, thus saving money on parking.

“Bitcoin offers a truly open, level playing field in which to build innovative commerce-driven products,” says Alexander Wilhelm, Parkt’s Co-Founder and CTO. “The friction and costs imposed by credit card and bank fees have really throttled innovation – I never realized just how much until we started diving into Bitcoin.”

“Leveraging bitcoin and other crypto currencies lets startups like Parkt innovate in ways that would have been too costly or intensive otherwise. With Bitcoin, we can skip integrating with expensive, proprietary payment methods and never have to worry about scalability or international borders,” he added.

After parking a car in a participating garage, Parkt’s users have to scan the QR code on the parking ticket to unlock validation offers from local restaurants, shops and other merchants. The users can check all the local businesses that are also using the app and select the most relevant offer.

To obtain a discount the users just have to show the validation certificate to the cashier at manned facilities or insert the ticket at automated facilities, which apply the discount automatically. Each company sets its own amount of rewards to be paid. 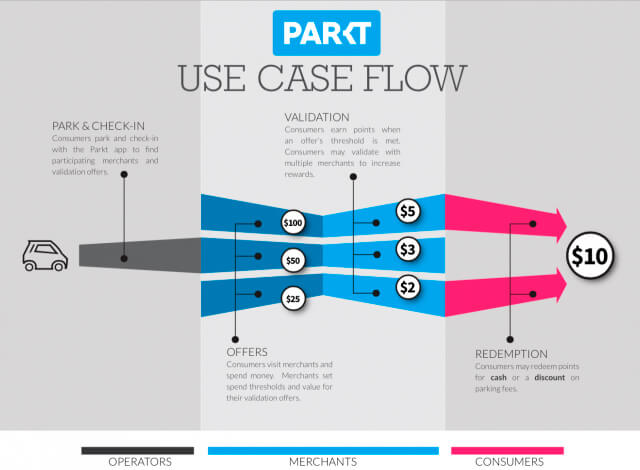 Notably, the users can receive validation from multiple businesses to minimize parking fee or even eliminate it. The company is constantly working on adding new merchants to its system.

In order to receive rewards in digital currency, Parkt’s users have to create a third party bitcoin wallet as the app doesn’t include its own wallet for cryptocurrency storing.

While helping users to reduce parking cost, Parkt will help parking operators to boost their revenues and raise volume.

Parkt is a parking and advertising system aimed at serving merchants, parking operators and consumers. It connects merchants and parking operators via a seamless mobile technology platform and enables customers to get free parking.

Alex Wilhelm, co-founder and CTO at Parkt, is a well-known figure in the bitcoin community as he has been working in the industry for a number of years already.

The company is now considering the possibility of launching the system outside the country. Moreover, it has discussed this possibility with the Singapore’s chamber of commerce.

Parkt is now available for use in 20 car parks in San Diego and Seattle. Still, the startup is planning to move its headquarters from Seattle, WA, to California in the future.

Parkt can be purchased at App Store now, although it will soon be available on Google’s Play Store.