Justin Sun has made a pre-announcement that the TRON Foundation will unveil a new partnership with a multi-billion dollar megacorporation by next week.

TRON founder and BitTorrent CEO Justin Sun has announced a teaser to whet appetites in the TRON community about an announcement from him and the TRON foundation before October completely runs out. Taking to Twitter to post the teaser, Sun announced that TRON will enter into a partnership by next week, with a “hundred billion USD megacorporation.”

#TRON will partner with a hundred billion USD megacorporation next week. It will not only benefit $TRX but all TRC10&20 tokens including $BTT & $WIN etc. It will broadly distribute #TRON Dapps and tokens to billions of customers. TBA. Make a guess?

While no one is currently sure what corporation Sun is referring to, his tweet also specifies that the soon-to-be-announced partnership will benefit not only TRON’s native $TRX tokens, but also all supported tokens on the TRON blockchain as well as decentralized applications (DApps), with distribution of tokens to billions of customers. He then asks his almost 2 million Twitter followers to guess what megacorporation he was referring to.

This is the second hint from Sun in less than two weeks. On Oct 15, Sun was asked on Twitter by a member of the TRON community, about whether there’d be any “big news” that will “shake the crypto market”, with Sun specifically replying that something will come at the end of the month.

There are already rumors in the TRON community however, that the corporation in question is the Samsung company. This suggestion is largely based on the possibility for TRON to add both the TRX and all other TRC20 tokens to the company’s new Samsung Blockchain Wallet. Another reason why this seems like a plausible enough scenario is the fact that ever since Samsung made the blockchain wallet available a few months ago, it has been cementing related strategic partnerships with several companies. In addition, Sun had tweeted earlier this month that he would be one of the speakers at the upcoming Samsung Developer Conference 2019, slated for Oct. 29 – Oct. 30 in San Jose, California.

In a different and very interesting turn of events, TRX experienced some good fortune recently. The asset which was the 11th largest cryptocurrency in the sector, shot up its rank by 30% to hit $0.021, securing a much-coveted space in the top ten list. Right now, TRX is number 10 with Stellar’s XLM at number 11. Interestingly, this isn’t the first time something like this is happening. Back in June, TRX was at 11 and beat XLM to become the number 10, even though it fell again.

In what can only be described as excitement at the development, Sun took to Twitter to post a screenshot of the CoinMarketCap homepage with a list of the top cryptocurrencies, predicting that TRX will finish the year somewhere in the Top 4. The screenshot was specifically captioned “Top 4. At the end of this year.” 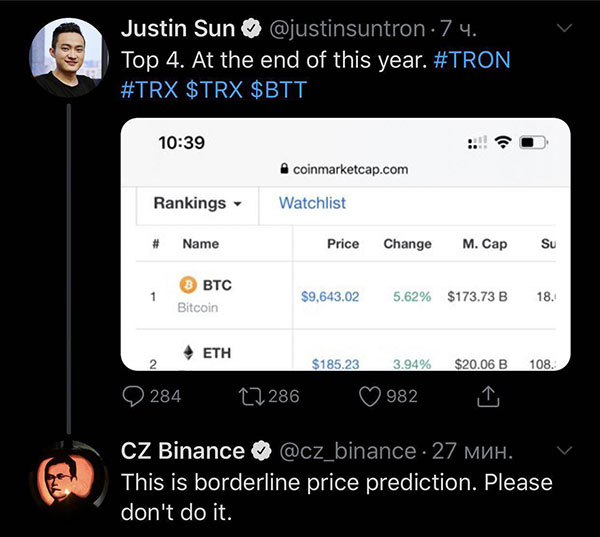 However, the tweet disappeared shortly after, because of a warning from Changpeng “CZ” Zhao, Binance CEO. CZ posted in his reply that Sun’s tweet was price prediction and should be strictly avoided.

“This is borderline price prediction. Please don’t do it.”

Even though Sun has since deleted the tweet, the internet simply never forgets and a screenshot of the exchange is already everywhere online.

TRX is currently trading at $0.02 and has experienced a more than 22% increase over the last 24 hours.

TRX is one of the legacy digital currencies around today but which have also been impacted by the ongoing crypto winter.