Coinapult is re-launching its SMS wallet with international support.

Coinapult has recently unveiled their new global Bitcoin service that functions via SMS technology, which means that users around the world that do not have smart phones or data plans will be able to use Coinapult SMS.

However, Coinapult isn’t the first SMS wallet. Blockchain and Coinbase have been having send-Bitcoin-by-SMS service for years, though it requires users to sign up an account to receive the sent money. Coinapult has explained the difference:

“At Blockchain you have to login/create a wallet to receive the funds sent by SMS, data service is required for functionality. At Coinapult you don’t ever need to leave the SMS environment to use funds sent to you. Spend, invoice, view transactions and even lock BTC to a range of currencies and assets with simple txt commands.”

Besides, Coinapult has a solid advantage over existing services. It considers that their service is imperfect and centralized. However, such things are necessary steps towards the greater goal of a decentralized solution. It responded to the fact that a MITM (Man In The Middle) attack is possible to capture users’ private keys:

“Yes, it is possible that a dishonest telecom or telecom employee could intercept or distort the messages. For this reason, Coinapult does not advise using these accounts for large amounts or long-term storage. Our SMS wallet is a convenience for people with few/no options.” 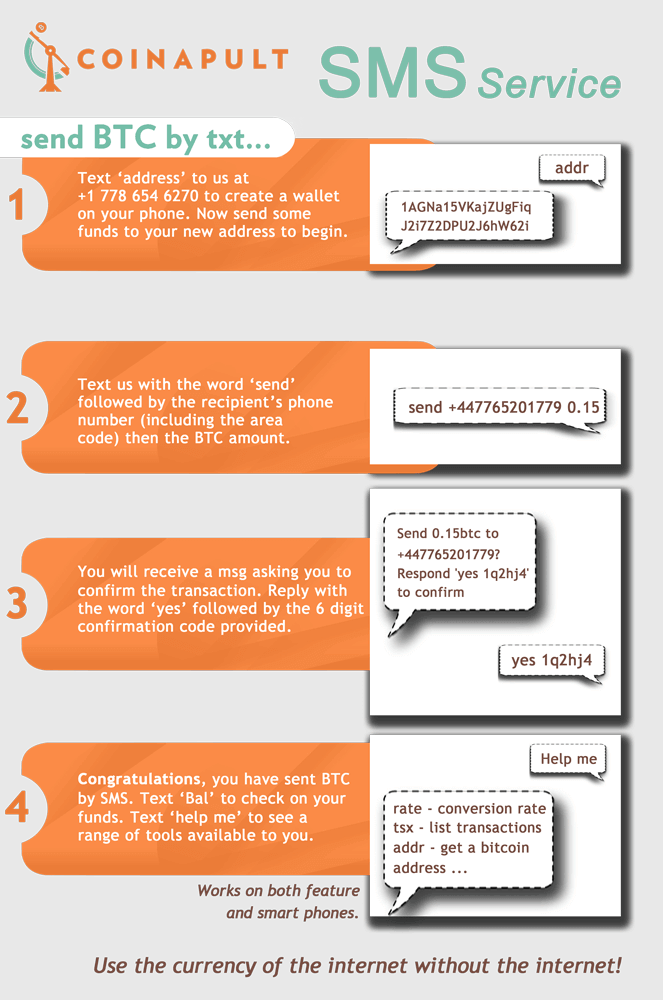 Coinapult is working on providing more languages, besides, it is looking into more secure possibilities that SMS and SIM card technology, prevailing around the world, can offer. It turned out that SIM cards are capable of executing small java applets.

“SIM card is capable of executing “java applets” – small (up to 64kB) programs written in modified java. 64kB is enough to store private key and signing algorithm. Theoretically you could receive unsigned transaction via SMS, sign it, and then send it back to someone who will broadcast it into the bitcoin network,” was posted by anonymous Reddit user.

“In such case SMS does not need to be encrypted, since it is secured by signing the same way any bitcoin tx is. Someone “could” send to you fraudulent transaction to sign, but recipient’s address displayed on the phone screen would change,” he

Coinapult allows users to “lock” the exchange rate for any portion of their stored bitcoins at any time, which makes it different from existing SMS Bitcoin providers. Other services such as BitReserve or BitShares offer centralized and decentralized options to this type of service as well. Having a volatility tool and SMS wallet in one place will be a great benefit to those in developing countries. Check out the Coinapult Locks video above.

Regarding the supported countries for SMS technology, Coinapult commented as follows:

“Technically, this works in every country in the world except the US, which is blocked. Most of the time that would require international text messaging fees, though. For this reason we are working hard to add local phone numbers in a number of markets. Currently supported: United Kingdom Canada. Coming very soon: Belgium, Finland, Norway, Poland, Spain, Sweden.”

According to Coinapult, withdrawing bitcoins to an adress is the same process as sending to another phone number, but instead of a phone number, one should write the address. It works with email addresses as well. Example: send 1CPGByjASvkLN7mLZP9cz4nRaaUXHsEXtp 1 or send [email protected] 1.

Bitcoin technology is extraordinarily unique because it can maintain its security even while being used over SMS, Bluetooth, NFC (Near field communication), or even Ham radio. There is no doubt that new improvements will continually increase the reach of the Bitcoin network.