This story is about how awesome inventions of technology world can be used by scammers to deceive people, about people who dreams of easy money and how well they can find each other.

Looking for information for the article I bumped into a website coinsdouble.com. It was interesting because of its high alexa rating, one of the largest web analytics services.

Frankly speaking It was the first time I met such a website oriented specifically towards crypto currencies. At a first glance it looks like Coinsdouble is a typical HYIP (high-yield investment program) – kind of ponzi scheme. That means, you are supposed to transfer your money to some account and the you are promised giants profits in a super short period of time. Generally, dozens percents of profit within a day.

For some time, usually a week or two, the cheaters pay you on clock, and you are feeling like a blast from such a freebie, reinvesting the profits and voluntarily start a word of mouth advertising. In the era of social networks such refer a friend campaigns could reach a really epic scale. When the money inflow starts to satisfy the organisers they vanish in a blink of an eye with all the funds.

As a rule, such websites are made really fast and are not visually appealing. Minimum of information and no contacts. In the best case there will be a contact form filling in which you will never hear back. So when you stop getting payments from such a service all you can do is smile, consider this a prominent life experience and clean your browser cache.

Coinsdouble was promising 100% profits within 100 hours, which is 4 something days. When I got to the website first its Alexa rank was approx. 180,000. As I’m writing this post its global rating is already terrifyingly high at 89,000 and growing. 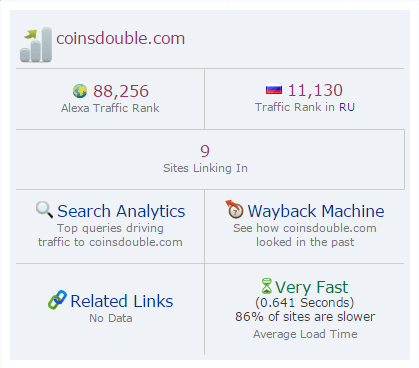 Just for your information, that is among more than 1 billion websites across all the Internet. The only explanation I could think of was that it is not a HYIP. Or, those guys are aiming really, really high.

And so I had decided, why don’t I check it out. The service promised that my money would be handled by a great team of professional traders, who would double my investments in 100 hours and, apparently, will leave something for themselves, too. They accept bitcoin, litecoin, dogecoin, and paycoin.

No accounts, two-step verifications or anything else needed at all. Just type in your wallet number and click on the “Double Coins!” button. Then the wallet is generated where you are supposed to transfer any amount of coins, from the very minimum (for each coin) to the infinity.

Immediately there they offer you to take part in the affiliate program in the form of 10% referral link, but I passed on that. Then you are forwarded to a page with three links: all investments, my investments and payouts. Your 100 hours of solitude just started…

Following the Payouts link you can find a wealthy list of lucky people that got doubled with a proud status “PAID!”. Under All investments – your comrades. And under My investments – your savings waiting for a miraculous doubling up. In the table there is also information about the time of a deposit, deposit currency, wallet you paid with, the sum of a future payout, and a magical CONF column with some positive numbers. My best guess, CONF means number of confirmations according to blockchain:

All wallets are clickable and forward you to the blockchain.info where you allegedly can calm yourself about not being cheated on. I doubt though that any of the Coinsdouble investors made an effort to look into the blockchain information and make sense of it.

Anyway, for the next 100 hours the only thing you can do is to watch the timer for your deposit. It was deep night when my 100 hours finished, so first thing in the morning I checked was Coinsdouble. “Time Left” field was showing 00:00:00. I refreshed the page and… “Time Left” immediately became 16:10:41.

I started digging up what happened. I found out that the time of my deposit changed in such a way, so that altogether with the Time Left to give me 100 hours. What was supposedly a ponzi scheme now became evident. Well, but there is a contact form on the website. I quickly wrote down what happened and literally with no hope submitted the form. A week passed and I never heard back.

Then I looked into the blockchain. Appeared so that my deposit left the wallet I sent it to approx. after 68 hours from deposit time and disappeared in the blockchain. The recipient wallet has only two transactions: acceptance of the coins and sending them in full to a third address. A rough analysis of other users wallets showed that some of them actually got doubled funds back. However, most likely that this was part of the evil plan not to let a quick fall of the scheme or those are the dummied wallets.

The following investigation led me to the Bitcoin Talk – the most popular bitcoin forum. Coinsdouble topic was opened on January 18th, 2015 by the owner of Coinsdouble himself! He even exchanged messages with people on the forum promising to continue paying for at least 6 months, which basically confirmed that the service was nothing about trading as they claimed on the website. Last message from the owner was posted on January 28th.

Judging the conversations on the forum, problems with  payments  started on February 2nd, in two weeks after the service launched. People were complaining they don’t get the money and the payout time is constantly moving forward. What’s interesting, bitcoins were not payed back most often. There were some people who reinvested and doubled up several times  and were actually able to stop and cash out. Some people criticised the topic starter from the very beginning. The unrest of forum users grew with every new page.

There was no point digging deeper… Miracle never happened.

What was my lesson? My life experience didn’t let me down and screamed for it being a ponzi scheme. But my entrepreneurial guts and excitement suppressed the common sense. Well, I risked! And now I have a chance to share my experience in this post and maybe help some of you make a right decision when the time comes, and also bring my two cents of the truth and fairness to the world.

You can treat bitcoin in many different ways: as a joke, paper or real money, ground breaking technology, a giant financial bubble. But there is only thing you can’t argue about, bitcoin, as well as blockchain, are the most extraordinary and promising technologies in the Internet history. So I feel a huge discomfort when they are monetised in such an abusive and miserable way.

Be good and count on no one but yourself!

Twitter is eyeing to introduce fiat payments first and then integrate crypto assets in the near future.

Today it was announced that Unbanked, the leading provider of white-label crypto card issuance and program management service for Web3 companies has partnered with Mastercard, to accelerate DeFi card issuance in Europe.

Back in January 2022, Elon Musk took to Twitter to offer the McDonald’s fast food chain to accept Dogecoin. The subject popped up again when a Twitter user Dogedesigner asked Elon Musk whether his offer is still open.