Facebook just have released the whitepaper for their Libra project on libra.org, which is the official webpage for the social networks native cryptocurrency. They are coming out with a bold statement to bank the unbanked.

Libra whitepaper has just been published and the main idea for Facebook is that you don’t have to have a Facebook account to use the cryptocurrency Libra. While Libra is only the currency, Facebook comes out also with The Libra Reserve, where all the funds are going to be stored and who provided them.

Then there also is The Libra Blockchain, which, they say, is a decentralized database that will have the power to become the medium of exchange for billions of people. Moreover, they have the Libra Association which includes 28 founding members like Visa, Mastercard, PayPal, Uber, Coinbase, Lyft, and others.

Basically, they have brought all the best companies in every industry and put them together to work on this project. Now they have only 28 worldwide companies, but they plan to gather around 100 by the beginning of 2020 when they will launch the blockchain.

“Once the Libra network launches, Facebook, and its affiliates, will have the same commitments, privileges, and financial obligations as any other Founding Member. As one member among many, Facebook’s role in the governance of the association will be equal to that of its peers.”

While Facebook’s Libra coin will offer multiple options on what to do with it, their initial goal is to solve the international remittance problem in the world. Mark Zuckerberg’s latest blog post reads:

“Libra’s mission is to create a simple global financial infrastructure that empowers billions of people around the world.”

The whitepaper explains that Libra is made up of three parts:

1. It is built on a secure, scalable, and reliable blockchain;
2. It is backed by a reserve of assets designed to give it intrinsic value;
3. It is governed by the independent Libra Association tasked with evolving the ecosystem.”

We’re yet to find out whether the blockchain is reliable, whether people will give this coin an intrinsic value, and how good of a job will the Libra Association do in governing the project.

While many of us were speculating whether Facebook will include their wallets within the actual social network or develop a separate wallet – well now we have the answer.

Calibra will first serve as the digital wallet where users can store their Libra’s and exchange with each other. Libra Association will govern this app, and eventually, Calibra is meant to develop financial services and products around the Libra Network. Also, Facebook Messenger and WhatsApp will serve as a functional wallet as well.

The Libra Blockchain is about to be launched sometime next year.

“Being able to use mobile money can have an important positive impact on people’s lives because you don’t have to always carry cash, which can be insecure, or pay extra fees for transfers. This is especially important for people who don’t have access to traditional banks or financial services. Right now, there are around a billion people who don’t have a bank account but do have a mobile phone.”

“For many people around the world, even basic financial services are still out of reach: almost half of the adults in the world don’t have an active bank account, and those numbers are worse in developing countries and even worse for women.

The cost of that exclusion is high – for example, approximately 70 percent of small businesses in developing countries lack access to credit, and $25 billion is lost by migrants every year through remittance fees.” 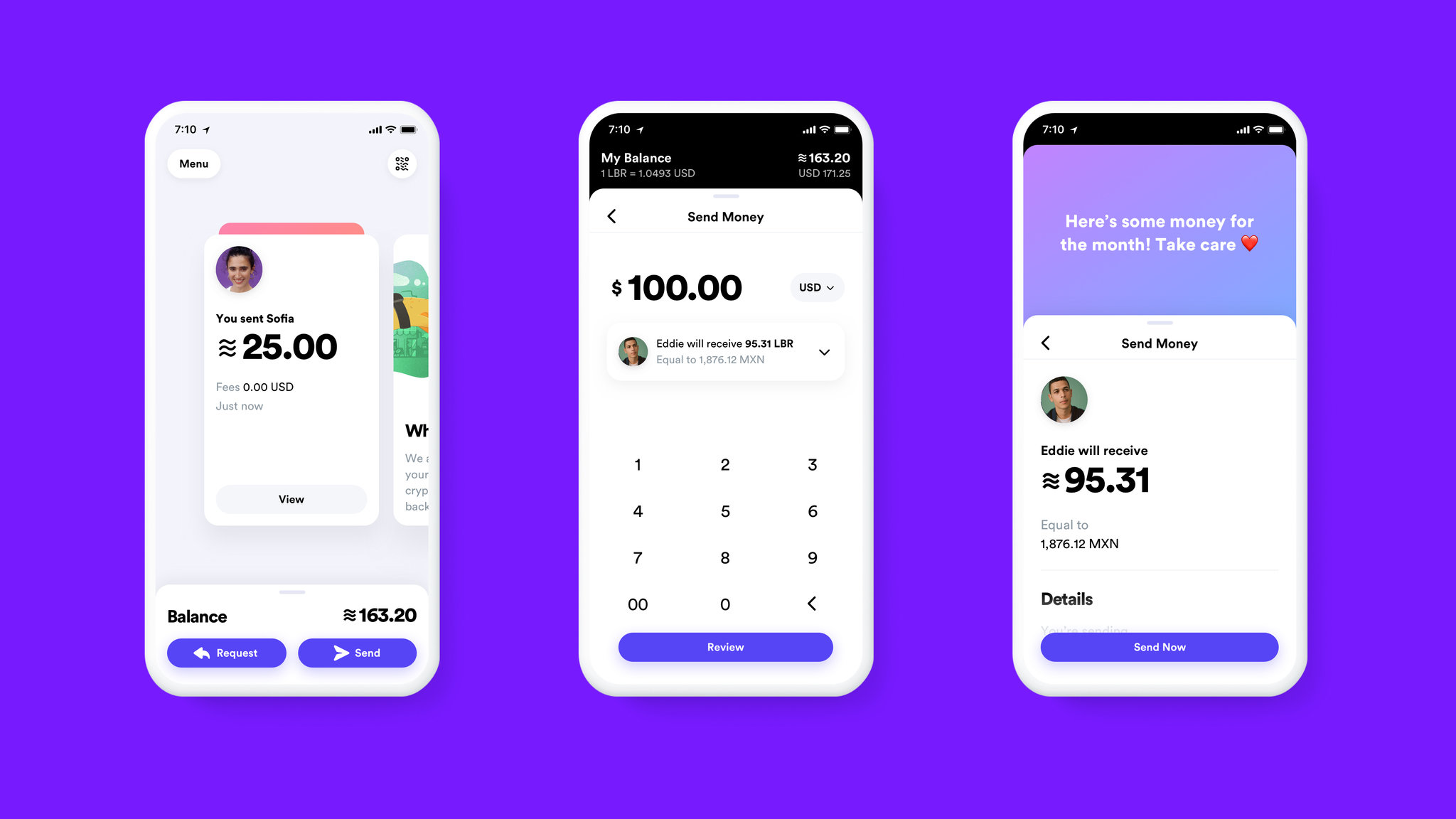 A proposed look for an official mobile wallet by Facebook called Calibra for handling the new cryptocurrency. Photo: Calibra

They also have provided screenshots and videos of the app, and it looks… just like any other crypto wallet ap. It has a very smooth sense to it, but in my humble opinion – nothing special. 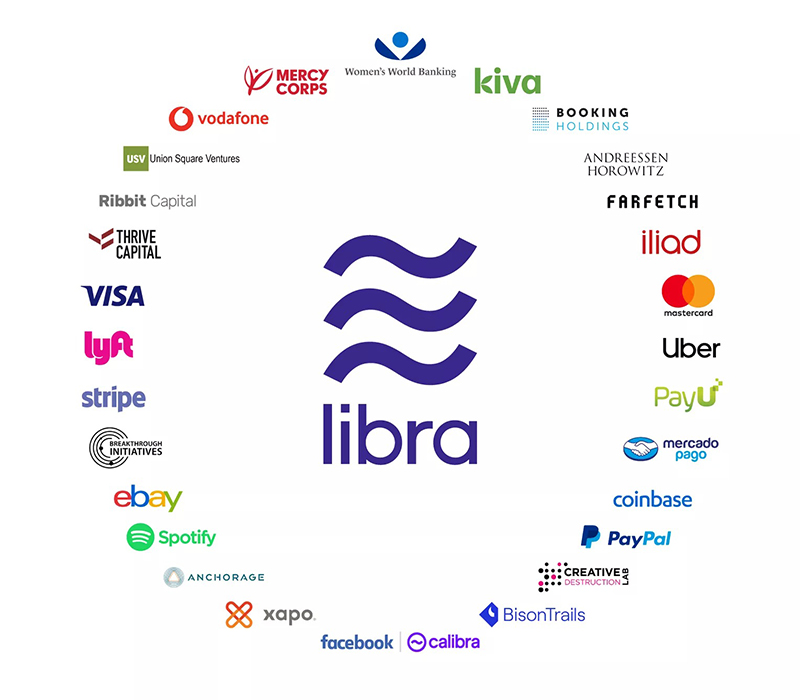 Members of the Libra Association will consist of geographically distributed and diverse businesses, nonprofit and multilateral organizations, and academic institutions. Photo: Libra Association

Also, their main goal which they actualize – I believe they are being a little bit hypocritical, because stablecoins and such digital currencies have been around for quite a while and solving the same thing they want to solve – international remittances. For example Ripple. They are leaving out the fact that this Libra project is backed by the largest corporations in the world and is fully centralized, not decentralized as they would want.

Now the Calibra wallet is just in a Testnet phase where it serves only as a wallet, but eventually, their plan is to allow users to pay for all sorts of services like bills and public transit. Some say that Facebook is entering the WeChat or Alipay market.

This is where the regulations come in. Of course, they want to be regulated in every corner of the world, and they will, which makes this coin even more centralized as I thought before. Also, they explain that social profiles and financial data won’t be linked to the wallet or profile, but I don’t really believe it. There will definitely be an option where you can share all that data which will eventually be more beneficial in terms of app use.

A rather weird statement to read was how Facebook said they won’t share any data or information about its users “unless required by law or for limited technical reasons.” That means that it is no different than a bank or any third-party instance which promises to keep your money safe.

Facebook Libra coin don't need KYC. They have so much more data on the 2 billion people. Not just name, id, address, phone number. They know your family, friends, real-time/historic location, what you like… They know you more than yourself. And now your wallet too. Best AML!

However, the whitepaper says that:

“The Libra protocol does not link accounts to a real-world identity. A user is free to create multiple accounts by generating multiple key-pairs.”

But ultimately, the Calibra wallet will use similar verification and anti-fraud procedures that banks and credit card providers currently use, as well as systems to monitor accounts for unusual behavior in order to prevent fraudulent activity.

“The libra currency and reserve will enable people around the world to trade in one single native currency. What we’re hoping is we will have the ability to foster a lot of innovation in the ecosystem across all dimensions.”

Janis is a cryptocurrency enthusiast and a bitcoin adherent. He has a background in video production, but for the past couple of years, he is a full-time crypto researcher and writer. He has a good understanding of multiple cryptocurrencies and loves to cover daily news. He considers himself a semi-bitcoin maximalist but always is open to any kind of new ideas that could be put on the blockchain. In his free time, he likes skateboarding and cars.

Both Ambit Finance and Binance Labs will work together on launching future DeFi apps with a focus on innovation, security, and risk control.